Why did the self-proclaimed skeptics work so hard to discredit this meeting before it even occurred?  Why have they ignored this press release? 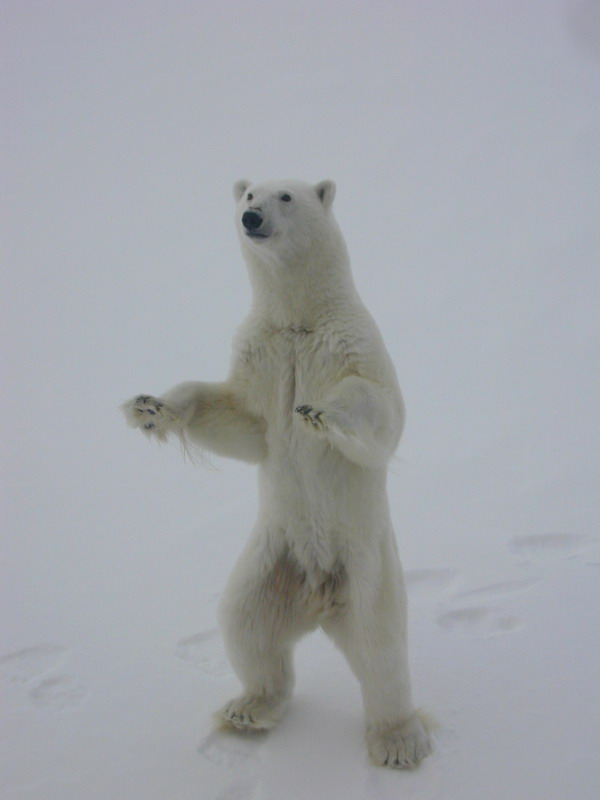 There is no dramatic finding in the release.  After you read it, you’ll probably wonder, too, why climate change skeptics don’t want you to read this press release:

The 15th meeting of the IUCN Polar Bear Specialist Group (PBSG), hosted by the Greenland Institute of Natural Resources, was held at the Greenland Representation in Copenhagen Denmark , June 29-July 3, 2009.  The Polar Bear Specialist Group is composed of researchers and managers representing each of the five circumpolar nations that signed the International Agreement for the Conservation of Polar Bears of 1973.  Since the late 1960s, the members of PBSG have met every 3 to 5 years under the umbrella of the Species Survival Commission of the IUCN (the International Union for the Conservation of Nature and Natural Resources) to review and exchange information, and make recommendations for research and management of polar bears throughout the Arctic.

The PBSG renewed the conclusion from previous meetings that the greatest challenge to conservation of polar bears is ecological change in the Arctic resulting from climatic warming.  Declines in the extent of the sea ice have accelerated since the last meeting of the group in 2005, with unprecedented sea ice retreats in 2007 and 2008. The PBSG confirmed its earlier conclusion that unabated global warming will ultimately threaten polar bears everywhere.

The PBSG also recognized that threats to polar bears will occur at different rates and times across their range although warming induced habitat degradation and loss are already negatively affecting polar bears in some parts of their range. Subpopulations of polar bears face different combinations of human threats.  The PBSG recommends that jurisdictions take into account the variation in threats facing polar bears.

The PBSG noted polar bears suffer health effects from persistent pollutants.  At the same time, climate change appears to be altering the pathways by which such pollutants enter ecosystems. The PBSG encourages international efforts to evaluate interactions between climate change and pollutants.

The PBSG endorses efforts to develop non-invasive means of population assessment, and continues to encourage jurisdictions to incorporate capture and radio tracking programs into their national monitoring efforts. The members also recognized that aboriginal people are both uniquely positioned to observe wildlife and changes in the environment, and their knowledge is essential for effective management.

The PBSG recognizes that where habitats are stable, polar bears are a renewable resource, and reaffirmed its support of the right of aboriginal groups to harvest polar bears within sustainable limits.  The PBSG noted that the population of polar bears in Baffin Bay, shared between Greenland and Canada, may simultaneously be suffering from significant habitat change and substantial over harvest, while at the same time interpretations by scientists and local hunters disagree regarding population status.  Similarly, the Chukchi Sea polar bear population which is shared by Russia and the United States is likely declining due to illegal harvest in Russia and one of the highest rates of sea ice loss in the Arctic. Consistent with its past efforts to coordinate research and management among jurisdictions, the PBSG recommended that the polar bear populations in Baffin Bay and the Chukchi Sea be reassessed and that harvests be brought into balance with the current sustainable yield.

A variety of management changes have occurred since the PBSG last met in 2005.  The PBSG members were particularly pleased that quotas for the harvest of polar bears in Greenland were implemented in January 2006, and that quota reductions have been implemented in some parts of Greenland.  Also since the last meeting, the government of Nunavut reduced the harvest quota in Western Hudson Bay because of the documented population decline.

The PBSG reevaluated the status of the 19 recognized subpopulations of polar bears distributed over vast and relatively inaccessible areas of the Arctic. Despite the fact that much new information has been made available since the last meeting, knowledge of some populations is still poor.  Reviewing the latest information available the PBSG concluded that 1 of 19 subpopulations is currently increasing, 3 are stable and 8 are declining.  For the remaining 7 subpopulations available data were insufficient to provide an assessment of current trend.  The total number of polar bears is still thought to be between 20,000 and 25,000.  However, the mixed quality of information on the different subpopulations means there is much room for error in establishing that range.  That potential for error, given the ongoing and projected changes in habitats and other potential stressors is cause for concern.  Nonetheless, the PBSG is optimistic that humans can mitigate the effects of global warming and other threats to polar bears, and ensure that they remain a part of the Arctic ecosystem in perpetuity.

Dr. Erik Born from the Greenland Institute of Natural Resources was elected as the new chairman of the group after Dr. Andrew Derocher from the University of Alberta, who has been serving as chair since 2005.

Well, there is that proclamation of optimism in the penultimate paragraph, that humans can mitigate threats to bears, including global warming.  Is that why they don’t want you to read it?

How are the polar bears?  They are in trouble.  The Polar Bear Specialist Group says we should help them out, that we can do things to save the bears.  Why would the “skeptics” not want us to know that?

This entry was posted on Sunday, August 2nd, 2009 at 4:38 pm and is filed under Biology, Climate change, climate_change, Cost of Green, Geography - Physical, Global warming, Green Politics, History, Politics, Science, Zoology. You can follow any responses to this entry through the RSS 2.0 feed. You can leave a response, or trackback from your own site.