Training adult Scout leaders always produces a few puzzled looks, and occasional passionate, fearful rebukes, when I note that a campfire gives a boy or a girl an opportunity to play with fire.

No, I don’t mean, exactly, that we should let kids play with fire.  There are rules — what’s burning must be in the fire pit, is the chief rule.

There is some primal need to watch a fire, to study it, to experiment with it, and finally just to watch it go. If you camped as a kid, you probably know what I mean.

Camp fires are universal. This one was outside Bangalore.

Every kid needs to do that.  It’s a part of growing up.  It’s a necessary memory for healthy and sane adults.

Start a fire, and a kid will get a stick and poke the burning logs and, especially, the red-, yellow- and white-hot coals after the fire burns a while.  They’ll start the stick on fire, put it out, and light it again.  They’ll pull the stick out of the fire and watch the flame consume the stick.  Kids will experiment with different things on the fire, to see whether, how fast, and how they burn.

Just keep it in the fire pit.

A Scoutmaster can tell which kids have been camping. A Scoutmaster knows which kids have been able to sit around a campfire and play with fire in that way.  Kids who know fire are more mature, generally, more relaxed about the excitement of the stuff, and much more careful with it.  Scouts who have dabbled in the campfire respect fire for what it is and for what it can do, good and bad.

You’ll remember some of the stories — Freddy Jonas’s often-told story of racing down the Champs Elysee in horse-drawn carriages, bribing the driver of the other carriage to go slower to win the race; the story of Rulon Skinner, the best non-swimming canoe instructor on Earth, and the big canoe race in which his opponent finally tipped Skinner’s canoe, and then yelled “snake!” to appeal to Skinner’s other great fear; the night the bear invaded the camp at Ben de la Tour, a bear later found to have antlers and four hooves.  You’ll remember the s’mores, and you’ll forget how messy they are.  You’ll remember the time you waited for the cobbler to cook after someone forgot to start the charcoal, or the the time the story got so good you forgot to take the cobbler off the fire, and how the Dutch oven had to be thrown away because it never would come clean.

You may remember that little fox at Camp Carter, sneaking just beyond the light of the fire and carefully circling every chair, looking for something good to eat, to steal.  Or that stupid porcupine that, now that you think of it must have been rabid, heading straight for the fire there in the only stand of Ponderosa pine in Utah County, up Payson Canyon.  And that will trigger the story of the night the fire wouldn’t start in the Catskills, and what seemed like hundreds of giant porcupines convened in bacchanalian festivities while campers dared not sleep in their tents.

Someone will mention retiring U.S. flags, and you’ll remember the retirement ceremony for the flag from the widow of the veteran, how she insisted that you promise the flag would be burned completely and honorably, and warned “he’ll be watching!”  You’ll remember the mass flag retirement after the lifting of the burn ban at Wisdom, and how you suddenly realized lots of flags put out lots of toxic fumes — but somebody ad libbed a part to the ceremony to add time to let the fumes clear, and no Scout noticed (you hope!).

We haven’t even gotten to the singing.

I was put in mind of the power of the campfire with a remembrance from Real Live Preacher writing at High Calling:

I remember how worried we were the first time we tried to set one of those brush piles on fire. We nervously stood before a ten-foot high, fifteen-foot wide mound with a can of lighter fluid and a couple of matches. I squirted a modest amount around the bottom of the pile and stood back while Michael threw the match. That’s when we discovered that it’s surprisingly difficult to set things on fire. Now I marvel at stories of people casually throwing cigarettes out of their cars and setting whole forests ablaze. Michael and I had a hard time starting fires even when we used diesel fuel and a blowtorch.

It takes about five hours to burn a giant pile of brush and cedar, so Michael and I would start a fire, then sit on the tailgate of the brown pickup truck and talk while we kept an eye on it. Apart from the searing heat and looking like chimney sweeps, it was fun. I’m always looking for guilt-free reasons to sit around and talk with friends. I don’t suppose I’ll ever have as good an excuse as I did back then.

A guilt-free reason to sit around and talk with friends?  A campfire is an automatic reason — guilt only obtains if there’s a ban on burning where you’re making the fire.

Carl Buell painted another one that took my breath away the first time I saw it.  Go see it. (I’m asking permission on this one; it may take a little while. Posted below with permission.)

That’s not a photograph, you can tell because it so well preserves what you remember — better than any photograph ever could —  it preserves what you remember from that campout up in the San Franciscos the night the sky was so blue so late and you could see the whole moon from the earthglow — or was it in New Mexico?  Probably not Colorado because there aren’t any mountains — oh, but if he’s looking east, it could have been south of Pueblo . . . no, maybe near Albion in the Sawtooths . . . Buell works in the east; it’s probably up in Maine . . . but he lived and painted in Marin County.

Didn’t he perfectly capture that night? 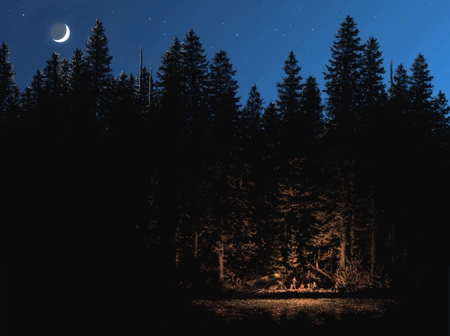 Think you have health insurance? Wrong

Baseline Scenario lays out the facts: People fear government reform of health care because they think it will interfere with their own health insurance.  Such people need to understand that they don’t have health insurance, and a broader government plan is the only saftey net they have to protect them from going naked against major health expenses.

Right now, it appears that the biggest barrier to health care reform is people who think that it will hurt them. According to a New York Times poll, “69 percent of respondents in the poll said they were concerned that the quality of their own care would decline if the government created a program that covers everyone.” Since most Americans currently have health insurance, they see reform as a poverty program – something that helps poor people and hurts them. If that’s what you think, then this post is for you.

Just one more point in a series of misconceptions, misperceptions, and unwarranted listening to false claims about health care and legislation designed to save our tails.  James Kwak and others at The Baseline Scenario do a good job explaining economics in the U.S. today.  In this piece he makes the point that in terms of health care, we are all among “the poor” (save for those few of you who make more than $1 million a year and have done for the past decade).

Ask not for whom the health insurance reform bill tolls; it tolls for you.