No special post — I’ll be commenting all year — but today is the official anniversary date for the founding of the Boy Scouts of America.

100 million boys later, we can tell for certain it’s a good idea.

In honor of Scouting’s 100 years in the U.S., I call your attention to the stained glass window in Trinity Episcopal Church in Torrington, Connecticut, The Boy Scout Window: 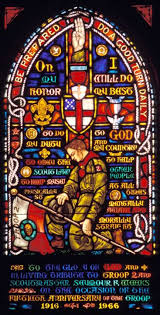 This is one of Trinity’s most well-known windows.

It was dedicated on Boy Scout Sunday, 13 February 1966, a service of Morning Prayer that began with the hymn “We Thank You, Lord of Heaven.” The window was given “to the Glory of God and in living tribute to Troop 2 and Seymour F. Weeks on the 50th anniversary of the Troop, 1916-1966.”

Mr. Weeks had been scoutmaster of Troop 2 since 1934 and would continue to lead the troop until his death in 1967.

Behind the kneeling scout with the flag is the seal of the Episcopal Church and above that a hand raised in the scout hand sign. Flanking the Episcopal seal are the emblems of the First Class Scout and the Eagle Scout badge. The words of the Boy Scout oath form the background. The border is composed of ropes showing some of the knots Scouts must learn. In between the ropes are two of the Scout’s mottoes: Do a Good Turn Daily, and Be Prepared.

Obviously, this window does not follow the architect’s pictorial plan for a window here showing the Holy Family with Jesus as a child.

Although several of Trinity’s windows were made by Len Howard of Kent, CT, one of Mr. Howard’s former associates is nearly positive this window was not made by Mr. Howard. However, a current parishioner’s great uncle, who was on the vestry in 1966, recalls that the church was dealing with an artist in Kent, CT, and there were no other stained glass artists in Kent except for Len Howard. Until further proof one way or another, this window will be attributed to Len Howard of Kent.

To the best of my searching, Troop 2 appears to have vanished from Torrington.