While thieves and COP15 fiddled, the world’s burning continued . . .

A friend wrote me the other day wondering what I thought about the global warming hoax.  I told him I thought denialists and contrarians have acted shamefully claiming that warming is not occurring.

My friend wrote back puzzled.  He had meant, what did I think about the collapse of the false claims of warming?  He said he had understood that almost all the claims of warming were hoaxes cast by a cabal of conspiratorialist scientists who had gotten fat government contracts only on the condition that they claimed there is warming.

It’s actually been about two weeks since I got that message, but it’s a common thought around the world.  The thieves who stole e-mails from scientists did what Shakespeare termed worse: They stole the good names of scientists.  The thieves’ accomplices, especially in blogs but also in brazen journals of bias like The Australian and The Daily Mail, successfully transplanted a stick they claimed was the end of warming science, and they’ve managed to keep it spray-painted green to convince careless observers that it’s alive.

That tree won’t flower.  God’s earth doesn’t care about such falsehoods, but goes on cycling as Darwin noted.  In that cycling, warming continues faster than apace, burning our future and our children’s futures in bits noted only by careful scientists.

While Anthony Watts and other denialists gloated about heavy snows — we’re still cleaning up broken trees and destroyed groves and forests here in Dallas — fact is the North American west suffered from a snow drought.  You may have seen part of it if you watched the Olympics from Vancouver.  It was unseasonably warm, and until the second week there was a great shortage of natural snow for snow events.

We may forget about the ecological chains that weather actually push.  Over at Ralph Maughan’s Wildlife News I found a story about the annual count of elk in Wyoming/Montana/Idaho.  Ralph tracks all sorts of wildlife news, but especially news about wolves and wolf reintroductions.  Wolf packs prey on elk when they can.  The health of elk herds affects the health of wolf packs.

In January I heard there would be no elk count this year because the lack of snow made counting pretty much impossible. I’m glad the amount of snow increased because these numbers are important. Gaps in the data are harmful.

How much have you heard about snowfall shortages in the west, other than the Olympics?  The drought is pretty bad up there.  Much of the Mountain west, on both sides of the Rockies, gets water from the melting snows.  It doesn’t rain much in the spring and summer, but melting snows supply rivers throughout the year.  One reader commented at Maughan’s blog:

I have been in the back country of Montana, Idaho and Washington in the last 3 months and I can tell you, there is no snow to really speak of, the place I stay in Montana normally has about 5-6 feet of snow on the ground in January and when I returned around the first part of January, it had about a foot, Bozeman was very low snow as was Great Falls and Billings, Sandpoint has flowers blooming already, the Columbia River Gorge area up in the Mountains above the Gorge is greening up real well, no snow and Mount Hood has not had much snow either.

Right now, it looks very bleak for river levels this year, My wife was on the phone with her cousin in Florence, MT and Her Uncle in Lincoln, MT this week and they are saying the snow is just not there this year and expects that fishing this year will be very poor due to low water levels and higher river temps, one lives on the Blackfoot and the other on the Bitterroot..

Looks like unless we have a strong spring rain season, things could get dicey this year..

Anecdotal news, just one spot of rather amorphous data, right?

Surely not all the droughts nor drought effects can be blamed on warming — but the rolling disasters of dead forests, especially from pine borers and pine bark beetles, across North America, can be fairly attributed to global warming.  Average winters would kill the insects — where average winters now are a rarity, forests that have stood at least since Columbus are dying out.  Many of the dying forests predate the coming of all humans to the Americas, 37,000 years ago or so.

Housing prices will rise.  Wildfires will increase.  Water emergencies will be declared, and restrictions on development in water-strapped counties and states will be enacted.

Humans can deny warming and human causation.  But even the Rockies cry out. 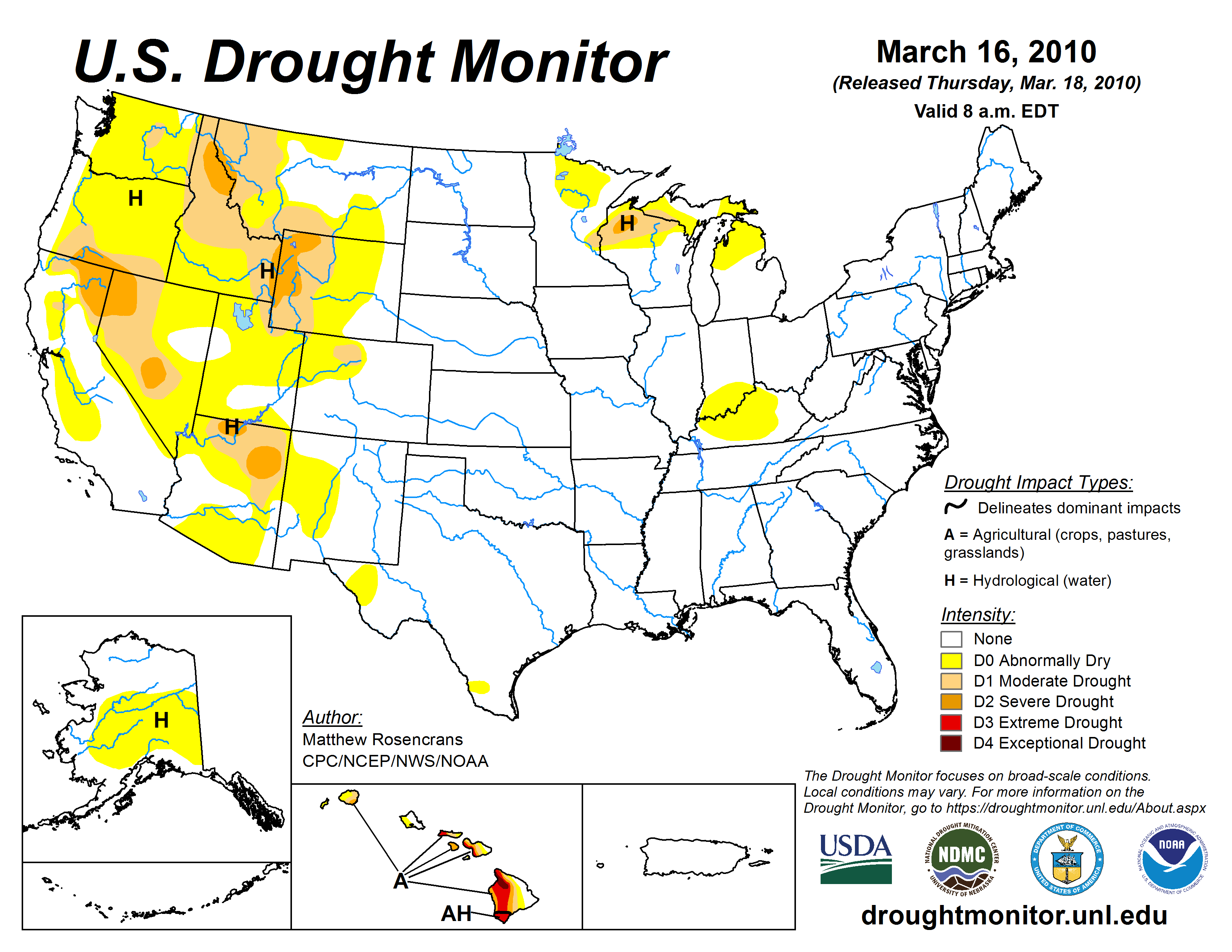 This entry was posted on Thursday, March 18th, 2010 at 7:57 pm and is filed under Climate change, climate_change, Cost of Green, Environmental protection, Forestry, Geography - Economic, Geography - Physical, Global warming, Green Politics, History, Science, Water, Wildlife. You can follow any responses to this entry through the RSS 2.0 feed. You can leave a response, or trackback from your own site.

One Response to While thieves and COP15 fiddled, the world’s burning continued . . .