Last photos of President McKinley — who are those people?

Chamblee 54 carried this photo of President McKinley, the “last portrait” before his assassination the following day (there were other, later photos, but no later portraits).  The picture was taken on the afternoon of September 5, 1901, in Buffalo, New York.

The photo comes from the American Memory Collection at the Library of Congress.  It was taken by Francis Benjamin Johnston (1864-1952).

I am curious:  Who are the other people in the photo, especially that tall guy? 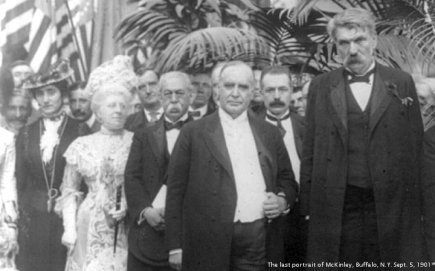 To the left of the photo, the fellow peeking out from between the dignified-looking woman and the guy with the really droopy, white walrus moustache, is the president of the Buffalo Exposition, John Milburn.  .

People in the picture are:  Left to right: Mrs. John Miller Horton, Chairwoman of the Entertainment Committee of the Woman’s Board of Managers; John G. Milburn; Senor Asperoz, the Mexican Ambassador; the President; George B. Courtelyou, the President’s secretary; Col. John H. Bingham of the Government Board.

More, including a larger version of the photo, below the fold.

One may purchase a copy of the photo from Robert McMahan Photography:

This entry was posted on Sunday, July 25th, 2010 at 1:07 pm and is filed under Assassination, Gilded Age, History, History images, Presidents, Progressive Era. You can follow any responses to this entry through the RSS 2.0 feed. You can leave a response, or trackback from your own site.

11 Responses to Last photos of President McKinley — who are those people?