Rats. On October 14 I missed noting the anniversary of Chuck Yeager’s great feat, breaking the sound barrier in level flight.

Greg Laden’s blog reminded me, “Happy Anniversary, the Breaking of the Barrier.” Below, what I wrote in 2007, mostly still accurate.

Panorama of the Mountains noted the 60th anniversary of the first known faster-than-sound flight by a human — October 14, 1947. Test pilot and all-around good guy Chuck Yeager did it.

Bell X-1 displayed at the National Air and Space Museum

This is a great post-World War II, Cold War story of technology that should pique interest in the time and the events for many students. For a 90 minute class, a solid lesson plan could be developed around the science and technology of the flight (yes, even in history — this is key stuff in the development of economics, too). The physics of sound, a brief history of flight and aircraft, the reasons for post-war development of such technologies, the political situation: There are a dozen hooks to get into the topic. Fair use would cover showing a clip from “The Right Stuff” about the flight, and there are some dramatic clips there. (The movie is 3 hours and 13 minutes; great stuff in a format too long for classroom use. Is there any possibility your kids would read the Tom Wolfe book?)

When will someone – the Air Force? NASA? an aircraft company? — put together a DVD with authorized film clips from the newsreels and the movie, and suggested warm ups and quiz questions?

Back in the bad old days one of my elementary school teachers did an entire morning on the speed of sound, aircraft engineering, and the history of faster-than-sound flight. I learned the accurate way to measure the distance to lightning by counting seconds to the thunder (it’s about a mile for every 5 seconds, not a mile for every second, as our school-yard lore had it). 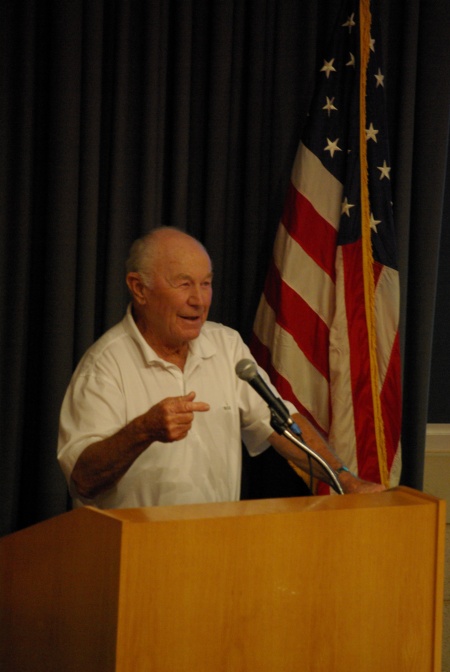 This program, to fly at the speed of sound, at what is now Edwards Air Force Base changed the way science of flight is done in the U.S. Yeager led the group of Air Force pilots who proved that military pilots could do the testing of aircraft; the project proved the value of conducting research with experimental aircraft on military time. The methods developed for testing, evaluating, redesigning and retesting are still used today. The drive for safety for the pilots also grew out of these early efforts at supersonic flight.

Yeager’s flight came when technology was cool, not just for the virtual reality role playing games (RPGs), which were still decades in the future, but because it was new, interesting, and it opened a world of possibilities. We all wanted to fly airplanes, especially small, fast airplanes.

A sonic boom over southern Idaho produced a couple dozen calls to the local police and fire departments (long before 911 emergency calling systems), and a couple of paragraphs in the local newspaper.Later, when we moved to Utah County at the foot of Mt. Timpanogos, we kids relished the flights of fighter jets at 6,000 or 7,000 feet above MSL on their way to or from Hill AFB in Ogden, only a thousand feet or so above our heads in those mountain valleys.

Whether authorized to fly them or not, the fighter jocks recruited us kids with their ground-hugging forays. And if one jet occasionally passed the speed of sound, the school bus-stop would buzz with it for a couple of days, as we tried to determine whether anybody ever really lost a window to such fun and excitement as a sonic boom. We could hardly wait to be the pilots of those airplanes, giving a start and a thrill to housewives across America who worried their replica Ming vases and picture windows would crash to smithereens.

Supersonic transport excited me then, and still does. As a lover of the environment, perhaps I should have stood firmly against supersonic flights of the British-French Concord over the U.S., but I hoped a compromise could be reached. New York to Los Angeles in two hours seemed like a good idea to me at the time, and it still does. The U.S. legislated ban on supersonic passenger flights probably doomed the idea of supersonic transport. Boeing dropped its plans to build a competitor to the Concord. The Concord itself never got the support it needed to continue production and refinement of the idea. By the time the Concord was retired in October 2004, it was 50-year-old technology.

I wondered at the time what would have happened had research on passenger supersonic flight continued. Shutting off technology is a strange thing. Steam engine technology was poised to make a great leap forward in the early 20th century, some argue. Diesel and gasoline engine sales blocked the leap, especially the creation of the Diesel-electric railroad locomotive engine.

But make no mistake about it: The Concord was fun. My friend Perry W. Buffington — as amiable and useful a traveling companion as is known in the modern world — found a fantastic fare for a Concord flight for us over the Christmas-New Year’s holidays, 1978 and 1979. We flew to London on a Delta L-1011 on Christmas night; we spent a week in London getting cheap tickets to great shows (the Royal Ballet’s Nutcracker, featuring a kid I knew from Spanish Fork, Utah; Pirates of Penzance at D’Oyly Carte; Evita in the first run, as I recall; a great revival of Oliver! Great stuff, cheap tickets). Then, to cap it off, the Concord from London to New York. Mach 2, on January 1.

It snowed record depths in all of southern England. On New Year’s Eve day, we skated the snow-packed streets to Harrod’s for last minute souvenir shopping, and bumped into Lauren Bacall. Then we sat in the bar of the hotel and watched the news reports of how the entire country was shut down by the snow, including the British Railroad. Our flight out seemed to be due a delay, at least. But we got a call from British Airways confirming the flight, later that night. So on January 1 we got a snowcat — not really, just a brave taxi — to the downtown check-in office of BA.

Then the show kicked in. The agent checking us in took our bags, reached into a drawer and pulled out a roll of pound notes. Without breaking his conversation with us, he beckoned over a woman who was helping passengers onto the shuttle bus to Heathrow, handed her the roll of bills and said simply, “Concord for these gentleman.” She sprinted to the curb outside and hailed a taxi. The agent had called the airport and informed us that while nothing else had flown, “The Concord will depart on schedule. Thank you for flying British Air — your taxi is waiting.” The woman at the curb held the door for us — no bus shuttle for Concord passengers!

The taxi rocketed to Heathrow. I don’t know how much BA paid, but the driver was extremely happy to move us at extreme speeds over slippery roads.

Concord waiting lounges provided the best amenities. Separated from even First Class lounges, the free champagne, and any other liquor, was served on the ground as well as in the air. For morning departures, a chef in the lounge created elaborate egg dishes to order, for breakfast.

Flying the Concord was always a celebrity experience. The festive feeling of our New Year’s Day flight zoomed considerably when Lauren Bacall breezed into the waiting room. (The only other time I got into a Concord lounge was at Dulles a few years later; Ray Charles checked in for the flight. He asked for a window seat.) We watched a television news report that all flights at Heathrow were delayed by the snow as we got the announcement the Concord was ready to board, on time. If our flight wasn’t the only flight leaving Heathrow that day, it was definitely the first. “Snow doesn’t bother the Concord,” one agent explained.

Supersonic flight passenger jets present special problems to air traffic control, especially with their speed. Plus, they fly better where the air is thinner. So instead of the normal 30,000 to 45,000 feet altitude of commercial airliners, Concords flew at about 70,000 feet. This becomes clear to a passenger on take off: Concords get off the ground, and then take a radically steeper climb that, from the inside, feels like going straight up. At cruising altitude, at about noon, a passenger looking out the window can look up to see the blue sky disappearing into darkness (a night flight with the Aurora Borealis must have been some great spectacle).

Concord’s cabin was not spacious. It held 100 passengers, a bit smaller than a modern 737. The food service was divine, with plenty of stewards on hand to attend to passengers. Among the best lamb chops I’ve ever had (and mind you, I come from sheep country). Complimentary champagne, wine, and cigars — “not Cuban, I’m sorry,” the steward explained. “U.S. rules.”

Two hours from Heathrow to JFK. We flew faster than the time zones changed, landing a couple of hours earlier than our departure. Time travel!

(The week in London, airfare there, and the Concord back, was under $1,500 in 1978. Inflation affected the prices before the Concord retired.)

Two in my immediate family have flown faster than sound. My brother, Wes, flew F-4s. And champagne and steward service notwithstanding, he had the much better deal. He did it more often, and he had the stick.

Chuck Yeager did it first, in level flight (there is some conjecture that a British pilot had done it earlier, in a dive — but he didn’t recover from the dive).

How best to commemorate breaking the sound barrier? Do it again!

Astronauts Chuck Yeager and Dave Scott, with their co-pilots, prior to the 60th anniversary sound-barrier breaking flight, 2007 Edwards AFB

Edwards Air Force Base, September 21, 2007 – General Yeager flew a US Air Force F-16 to commemorate the 60th anniversary of Breaking the Sound Barrier (October 14, 2007), the 60th anniversary of the United States Air Force (September 18, 2007) and 65 years of General Yeager flying in military cockpits. Yeager was part of a flight of four planes; two F-16’s with Gen. Chuck Yeager and Maj. Gen. Joe Engle aboard, and two T-38’s carrying F-15 pilot Fitz Fulton, NASA Astronaut Col. Dave Scott, and Commander Curt Bedke. Yeager and Engle’s F-16’s broke the sound barrier high above the Base Operations Center – a double sonic boom, then the four planes executed a slow straight through pass, pitched out, landed, and taxied up to the hanger where the 2007 Air Force Ball was about to begin, attended by more than 1,000. Hundreds of ball guests, in gowns, tuxedoes, and dress blues, were assembled to greet the flyers, who snapped on black bowties and strolled into the ball wearing their flight suits. Gen. Yeager was honored at the dinner with a 60th Anniversary Sound Barrier Busting cake.