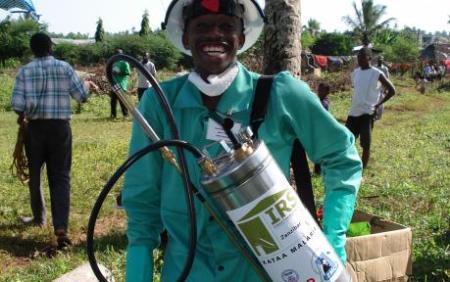 USAID-paid tools and pesticides used to prevent malaria in a campaign coordinated with the government in Tanzania. USAID photo.

The U.S. Agency for International Development (USAID) issued a statement on their support for the use of DDT, where appropriate.  I don’t have a date — if you know the date, please let me know — but for the record, here’s the statement.

Those who claim the U.S. discourages the use of DDT to the detriment of African and Asians, are incorrect in their claims, once again.

USAID activities for malaria control are based on a combination of internationally-accepted priority
interventions and country-level assessments for achieving the greatest public health impact, most importantly, the reduction of child mortality (deaths).

Contrary to popular belief, USAID does not “ban” the use of DDT in its malaria control programs. From a purely technical point of view in terms of effective methods of addressing malaria, USAID and others have not seen DDT as a high priority component of malaria programs for practical reasons. In many cases, indoor residual spraying of DDT, or any other insecticide, is not cost effective and is very difficult to maintain. In most countries in Africa where USAID provides support to malaria control programs, it has been judged more cost-effective and appropriate to put US government funds into preventing malaria through insecticide-treated nets, which are every bit as effective in preventing malaria and more feasible in countries that do not have existing, strong indoor spraying programs.

USAID country missions provide support to national malaria control programs in about 21 countries in sub-Saharan Africa, where the burden of malaria deaths is the highest. This support covers a broad range of activities, according to local priorities, resource availability and complementary activities by other donors and multinational institutions in each country.

International efforts to fight malaria are largely coordinated by Roll Back Malaria (RBM), a global partnership that includes leaders from across Africa, African health institutions, the World Health Organization (WHO), UNICEF, World Bank, UNDP, multi-lateral agencies, international, national and local NGOs, and the private sector. USAID is a key RBM partner. RBM has identified three priority interventions to reduce deaths and illness from malaria. These are consistent with USAID ’s priority areas for investment in malaria. These are:

1. Insecticide-Treated Nets (ITNs) for young children and pregnant women.
2. Prompt and Effective Treatment with an anti-malarial drug within 24 hours of onset of fever
3. Intermittent Preventive Therapy (IPT) for pregnant women as a part of the standard ante –
natal services.

Each of these interventions is backed by solid evidence of effectiveness under program conditions and effective in reducing the sickness and death from malaria, especially in Africa. For example, proper use of ITNs can reduce overall child deaths by up to 30% and significantly reduce sickness in children and pregnant women.

DDT is only used for malaria control through the spraying of interior house walls – Indoor Residual Spraying, or (IRS). A number of other insecticides can also be used for IRS, and are in many countries when those alternative insecticides are safer and equally effective. IRS, when efficiently conducted in appropriate settings, is considered to be as efficacious as ITNs in controlling malaria.

USAID regulations (22 CFR 216) require an assessment of potential environmental impacts of supporting either the procurement or use of pesticides in any USAID assisted project, but if the evidence assembled in preparing such an environmental review indicates that DDT is the only effective alternative and it could be used safely such as interior wall spraying undertaken with WHO application protocols, then that option would be considered. The U.S. government is signatory to the Stockholm Convention on Persistent Organic Pollutants (the POPS treaty), which specifically allows an exemption for countries to use DDT for public health use in vector control programs, as long as WHO guidelines are followed and until a safer and equally effective alternative is found. The US voted in favor of this exemption.

There are a few situations in which IRS with DDT is generally found to be appropriate. For example, in South Africa when certain mosquitoes developed resistance to the major alternative class of insecticides, the synthetic pyrethroids, DDT was used. Such situations are relatively rare, however, and demonstrate the value of the provisions of the POPs Treaty, which restrict and document use of DDT, but provide for its use when appropriate.

USAID is emphasizing prevention via mosquito nets dipped in pyrethriods – a synthetic insecticide originally found in chrysanthemums. USAID is supporting an innovative Africa regional public-private venture for the commercial distribution of ITNs. In 2003 USAID’s NetMark Project launched insecticide-treated net products in Zambia, Senegal, Ghana, and Nigeria selling more than 600,000 nets and 500,000 insecticide re-treatments during its first five months of operation. In 2004, NetMark will launch in at least five more countries in Africa.

USAID also invests in development of new tools for malaria control, particularly vaccine development and the response to increasing drug resistance. USAID is funding projects to discover and dispense new drugs such as Arteminisin-based combination therapies (ACT), which have proven to be more effective against malaria than the traditional drugs chloroquine and mefloquine. USAID also supports the development of new policies and strategies for use of these new therapies, as well as the improvement of both public and private health systems. Since 1998, the agency has aggressively supported the development of the combination therapy as a safe and effective alternative treatment.  In addition, USAID and its global partners in RBM are working to ensure sustained financing of the drugs. USAID has played a critical role in drawing attention to the spread of drug resistance in Africa and in assisting countries in effectively treating malaria, including the use of combination therapy.

In summary, USAID directs its support for malaria control programs based on evidence for maximum impact on reducing child deaths. Based on this criterion, for most countries with USAID support for malaria control in sub-Saharan Africa, indoor residual spraying (regardless of the choice of insecticide) has not been judged to be the most effective use of US government funds. USAID continues to plan its support for national malaria control programs in sub -Saharan Africa on a country by country basis, and will continue to strive to use US taxpayer funds as efficiently and effectively as possible with the most appropriate tools at our disposal to reduce deaths from malaria.

I suspect that statement is dated.  Here is a site at USAID that details the policy on DDT, malaria and mosquitoes, and includes a different statement under the same title as the above:

USAID activities for malaria control are based on a combination of internationally accepted priority interventions and country-level assessments for achieving the greatest public health impact, most importantly, the reduction of child mortality (deaths).

USAID backs a comprehensive approach to prevent and treat malaria. This includes:

USAID supports indoor residual spraying (IRS) with DDT as an effective malaria prevention strategy in tropical Africa in those specific situations where it is judged to be the best insecticide for IRS both epidemiologically and entomologically and based on host-country policy. Its use for IRS to prevent malaria is an allowable exception under the Stockholm Convention – also known as the Persistent Organic Pollutants Treaty or POPs Treaty – when used in accordance with WHO guidelines and when safe, effective, and affordable alternatives are not available. For a variety of reasons, some countries do not conduct IRS or have not registered DDT for use in their malaria control programs.  The reasons may include the epidemiological situation of the country, the organizational capacity of the program, or in some cases, concerns related to their agricultural export market.  The Stockholm Convention aims to eventually end the use of all POPs, including DDT.

The determination of which of the WHO-approved insecticides to use for USAID’s IRS programs is made in coordination with the host-country malaria control program, with the primary objective of preventing as many malaria infections and deaths as possible.  That determination is based on cost-effectiveness; on entomological factors; on local building materials; and on host-country policy.  USAID adheres to strict environmental guidelines, approval processes, and procedures for the use of DDT and all other WHO-approved insecticides in its malaria control programs. As part of our environmental assessments and safer use action plans, we help countries build capacity for safe and judicious use of all chemicals used in their malaria control programs, including DDT

The fact is that DDT is more effective and less expensive than many other insecticides in many situations; as a result, it is a very competitive choice for IRS programs.   DDT specifically has an advantage over other insecticides when long persistence is needed on porous surfaces, such as unpainted mud walls, which are found in many African communities, particularly in rural or semi-urban areas.

USAID has never had a “policy” as such either “for” or “against” DDT for IRS.  The real change in the past two years has been a new interest and emphasis on the use of IRS in general – with DDT or any other insecticide – as an effective malaria prevention strategy in tropical Africa.  (Recent successful applications of IRS, particularly in the southern Africa region, have also contributed to the keen interest among donors and among African malaria control programs.)  For example, in Fiscal Year 2005, USAID supported less than $1 million of IRS in Africa, with programs utilizing insecticides purchased by the host government or another donor.  For fiscal year 2007, in the PMI and in other bilateral programs, USAID will support over $20 million in IRS programs in Africa, including the direct purchase of insecticides.  This dramatic increase in the scale of our IRS programs overall is the greatest factor in DDT’s recent prominence in USAID programs.

Tanks of pesticide (DDT?) used for Indoor Residual Spraying (IRS) against malaria in Africa bear the labels to indicate USAID paid for the tools and the pesticide, contrary to hoaxsters’ claims.

Update: If you’re here from a religious discussion group that veered off into malaria and DDT, you’d do well to use this site’s search feature, and search for DDT.  Most of the statements from those favoring DDT in your discussion are pure, buncombe, junk science, as this site and several others reveal.

This entry was posted on Wednesday, February 16th, 2011 at 3:55 pm and is filed under DDT, foreign affairs, Foreign Aid, Government, History, Malaria, Politics. You can follow any responses to this entry through the RSS 2.0 feed. You can leave a response, or trackback from your own site.

4 Responses to USAID policy statement on DDT and malaria control