Old Jules was referring to something else, a serious enough issue on its own, and not necessarily the lack of vision among Republican presidential candidates.

But it fits from time to time: 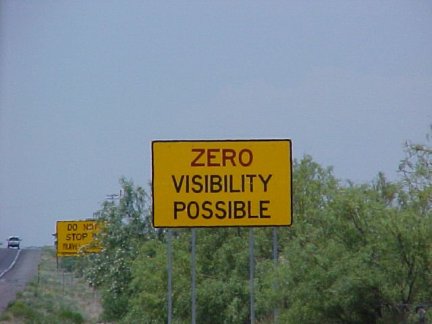 Bill Cosby once asked if anyone else had the same chill of fear he gets when the lights start to go down at the theater:  Are the lights getting dim, or are you going blind?

Is there zero visibility, or are our eyes shut tightly?  Can the candidates see what it takes to get us out of this olio, this olla podrida of messes, or is there too much fog, or are they just not looking?  Worse, is it dark AND they are not looking?

Encore quote of the moment: Robert Kennedy on what really matters

This is borrowed from Harry Clarke (with a few minor corrections in the text):

RFK said this in 1968. In a speech I heard today it was quoted and it stirred me.

Too much and for too long, we seem to have surrendered personal excellence and community value in the mere accumulation of material things. Our Gross National Product, now, is over eight hundred billion dollars a year, but that GNP — if we judge the United States of America by that — that GNP counts air pollution and cigarette advertising and ambulances to clear our highways of carnage. It counts special locks for our doors and the jails for the people who break them. It counts the destruction of the redwoods and the loss of our natural wonder in chaotic sprawl. It counts napalm and it counts nuclear warheads, and armored cars for the police to fight the riots in our cities. It counts Whitman’s rifle and Speck’s knife, and the television programs which glorify violence in order to sell toys to our children.

Yet the Gross National Product does not allow for the health of our children, the quality of their education, or the joy of their play. It does not include the beauty of our poetry or the strength of our marriages, the intelligence of our public debate or the integrity of our public officials. It measures neither our wit nor our courage, neither our wisdom nor our learning, neither our compassion nor our devotion to our country; it measures everything, in short, except that which makes life worthwhile. And it can tell us everything about America except why we are proud that we are Americans.

Kennedy delivered these words in an address at the University of Kansas, Lawrence, Kansas, on March 18, 1968.

Here’s a video production from the Glaser Progress Foundation which includes an audio recording of the speech:

Most of this post appeared originally here in 2009.  We need the reminder.