Faithful stargazers may already have spotted a few shooting stars from this year’s Leonid shower.  Best estimates are that the peak will come the night of Saturday, November 17. 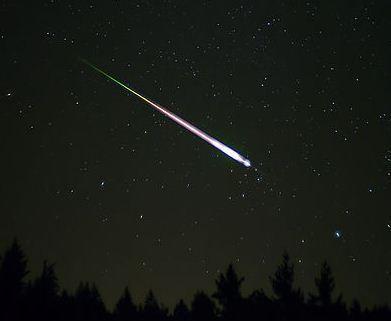 A meteor streaks across the sky during the 2009 Leonid meteor shower. (Navicore / Wikimedia Commons via Los Angeles Times)

One of our best sources on viewing meteors is the StarDate website.  Their advice for tonight:

The best viewing for this year’s Leonid meteor shower will be several hours before dawn on November 17. The shower should produce perhaps a dozen or so “shooting stars” per hour. The best view comes in the wee hours of the morning, as your part of Earth turns most directly into the meteor stream.

What is a meteor shower?

A meteor shower is a spike in the number of meteors or “shooting stars” that streak through the night sky.

Most meteor showers are spawned by comets. As a comet orbits the Sun it sheds an icy, dusty debris stream along its orbit. If Earth travels through this stream, we will see a meteor shower. Although the meteors can appear anywhere in the sky, if you trace their paths, the meteors in each shower appear to “rain” into the sky from the same region.

What are shooting stars?

“Shooting stars” and “falling stars” are both names that describe meteors — streaks of light across the night sky caused by small bits of interplanetary rock and debris called meteoroids vaporizing high in Earth’s upper atmosphere. Traveling at tens of thousands of miles an hour, meteoroids quickly ignite from the searing friction with the atmosphere, 30 to 80 miles above the ground. Almost all are destroyed in this process; the rare few that survive and hit the ground are known as meteorites.

When a meteor appears, it seems to “shoot” quickly across the sky, and its small size and intense brightness might make you think it is a star. If you’re lucky enough to spot a meteorite (a meteor that makes it all the way to the ground), and see where it hits, it’s easy to think you just saw a star “fall.”

How can I best view a meteor shower?

Get away from the glow of city lights and toward the constellation from which the meteors will appear to radiate.

For example, drive north to view the Leonids. Driving south may lead you to darker skies, but the glow will dominate the northern horizon, where Leo rises. Perseid meteors will appear to “rain” into the atmosphere from the constellation Perseus, which rises in the northeast around 11 p.m. in mid-August.

After you’ve escaped the city glow, find a dark, secluded spot where oncoming car headlights will not periodically ruin your sensitive night vision. Look for state or city parks or other safe, dark sites.

Once you have settled at your observing spot, lie back or position yourself so the horizon appears at the edge of your peripheral vision, with the stars and sky filling your field of view. Meteors will instantly grab your attention as they streak by.

How do I know the sky is dark enough to see meteors?

If you can see each star of the Little Dipper, your eyes have “dark adapted,” and your chosen site is probably dark enough. Under these conditions, you will see plenty of meteors.

What should I pack for meteor watching?

Treat meteor watching like you would the 4th of July fireworks. Pack comfortable chairs, bug spray, food and drinks, blankets, plus a red-filtered flashlight for reading maps and charts without ruining your night vision. Binoculars are not necessary. Your eyes will do just fine.

StarDate offers a wealth of resources on meteor showers, and clips from their radio programming on specific events.

Here’s a map of where to look in the sky (also from StarDate, though that’s not where I found it!):

Where should you look for Leonid meteors? Orient this map, and look to the east – courtesy of StarDate via NBC