Too late to save the planet?

Denialists scoff that 2º Celsius could cause disaster, say wait to see.  But is it too late already?

The world is currently on track for 6 degrees C of warming - total, unlivable catastrophe for human life: bit.ly/RCFT7P #350ppm

It’s a link to an article in the business section of The Guardian (links added here):

The report concludes that “governments and businesses can no longer assume that a two-degree warming world is the default scenario”, and urges greater planning to cope with the disruptive effects that more unpredictable and extreme weather will have on supply chains, long-term assets, and infrastructure, particularly in coastal or low-lying regions.

“Resilience will become a watchword in the boardroom – to policy responses as well as to the climate,” he said. “More radical and disruptive policy reactions in the medium term could lead to high-carbon assets being stranded.

“The new reality is a much more challenging future in terms of planning, financing and predictability,” Grant added. “The challenge now is to implement gigatonne-scale reductions across the economy, in power generation, energy-efficiency, transport and industry, as well as REDD+ in forested nations.”

District 15 for the Texas State Board of Education covers 77 counties in Texas’s northern Panhandle.  It’s oil (Midland), cotton, Texas prairie and small towns, and lots of schools, and some surprisingly good colleges and universities.

Texas State Board of Education District 15, TFN image – “District Overview
District 15 is huge, covering all of northwestern Texas. It is also arguably the most Republican SBOE district, giving more than 74 percent of the vote to Sen. John McCain in the 2008 presidential election and more than 70 percent to Gov. Rick Perry in the 2010 gubernatorial race.”

It’s a district where science plays a big role, and should play a bigger one.  The 15th includes those lands in Texas where the Dust Bowl got started, where unwise plowing based on inaccurate readings of climate contributed to one of the greatest man-made natural resources disasters in all of history.  It’s the home of Texas Tech University, where members of the chemistry faculty created a wine industry based on the chemistry of grape selection and fermentation, and where geologists learn how to find oil.

In short, science, engineering and other technical disciplines keep this area economically alive, and vital at times.

Of the two candidates, Democrat Steve Schafersman is a scientist, and a long-time, staunch defender of science education (what we now cutely call “STEM” subjects:  Science, Technology, Engineering and Math).  If the race were decided by a test in STEM subjects, Schafersman would be the winner.  Schafersman lives in Midland.

The GOP candidate in the race is religiously anti-science, Marty Rowley of Amarillo.  As a good-ol’-boy, former pastor, he’s got a lot of support from the usual suspects.  Rowley’s views on science, technology, engineering and mathematics run contrary to the business and farming interests of his entire district.  Do his supporters look to the future?

Do you vote in Midland, Lubbock, Amarillo, Dalhart, Abilene, San Angelo, Dallam County, Tom Greene County, Cooke County or Montague County?  You need to vote for Steve Shafersman.  Do your children a favor, do your schools a favor, and do your region of Texas a favor, and vote for the guy who works to make education good.

Shafersman is the better-qualified candidate, and probably among the top two or three people with experience making the SBOE work well, in the nation.  He deserves the seat, and Texas needs him.

Remember when people used to dress up to go to the polls?

In 1944 President Franklin Roosevelt ran for an unprecedented fourth term.  Most Americans did not know it, but he was deathly ill at the time.  He dropped Vice President Henry Wallace from his ticket — some argue it was a mutual disaffection at that time — and selected the relatively unknown young Missouri U.S. Sen. Harry S Truman for the vice president’s slot.

In November 1944, D-Day was known to be a successful invasion, and most Americans hoped for a relatively speedy end to World War II in both Europe and the Pacific.  Within the next ten months, the nation would endure the last, futile, desperate and deadly gasp of the Third Reich in the Battle of the Bulge, the liberation of Berlin in April 1945, and end of the war in the European Theatre on May 8; the Battle of Leyte Gulf, the Philippines Campaign, and the bloody, crippling battles of Iwo Jima and Okinawa in the Pacific Theatre, and then the first use of atomic weapons in war, at Hiroshima and Nagasaki (and we hope, the last use).

Voters in Cedar Rapids could not have known that.  They did not know that, regardless their vote for FDR or his Republican challenger, New York Gov. Thomas Dewey, Harry S Truman would be president within six months, nor that the entire world would change in August 1945.

This painting captures a time of spectacular moment, great naivity, and it pictures the way history got made.

For a 2007 exhibition, the Cedar Rapids Museum of Art offered this history:

In 2007, the citizens of Cedar Rapids rallied together to purchase a series of watercolors destined for the auction block in New York. These five watercolors, by acclaimed 20th century American artist Norman Rockwell, depicted scenes associated with an election day and were created specifically for the November 4, 1944 issue of the Saturday Evening Post. To complete the Post commission, Rockwell traveled to a quintessential Midwestern town, Cedar Rapids, to study local citizens as models for his series of images.

In the 65 years since his visit, numerous anecdotes and stories have arisen about the artist’s time in Cedar Rapids and the creation of this work. This exhibition uses these five, newly conserved and restored watercolors and a related oil painting from the Norman Rockwell Museum, along with numerous photographs taken by local photographer Wes Panek for Rockwell, to investigate the many facts and fictions associated with Rockwell’s visit and this set of watercolors.

Norman Rockwell: Fact & Fiction has been made possible in part by Rockwell Collins, Candace Wong, and local “Friends of Norman Rockwell.” General exhibition and educational support has been provided by The Momentum Fund of the Greater Cedar Rapids Community Foundation.

I am amused and intrigued that this scene also closely resembles the scene when I voted in Cheverly, Maryland, in 1984 — down to the dog in the picture.  Oh, and most of the women didn’t wear dresses, none wore hats, and I was the only guy in the room with a tie.

Roosevelt won the 1944 election in an electoral college landslide, 432 to 99, but Dewey won Iowa, and we might assume Dewey won Cedar Rapids, too.

Wish we were there: Sequoia and Kings Canyon National Parks

If u haven't seen how beautiful @SequoiaKingsNPS is, then u need 2 see this. instagr.am/p/RqaRwjgu6S/

We should go see for ourselves, no?

If you go today, vote before you go.  This is one of the areas to be opened to energy exploration — oil and gas drilling or other mining — under Mitt Romney’s “energy plan” and the GOP National Platform. 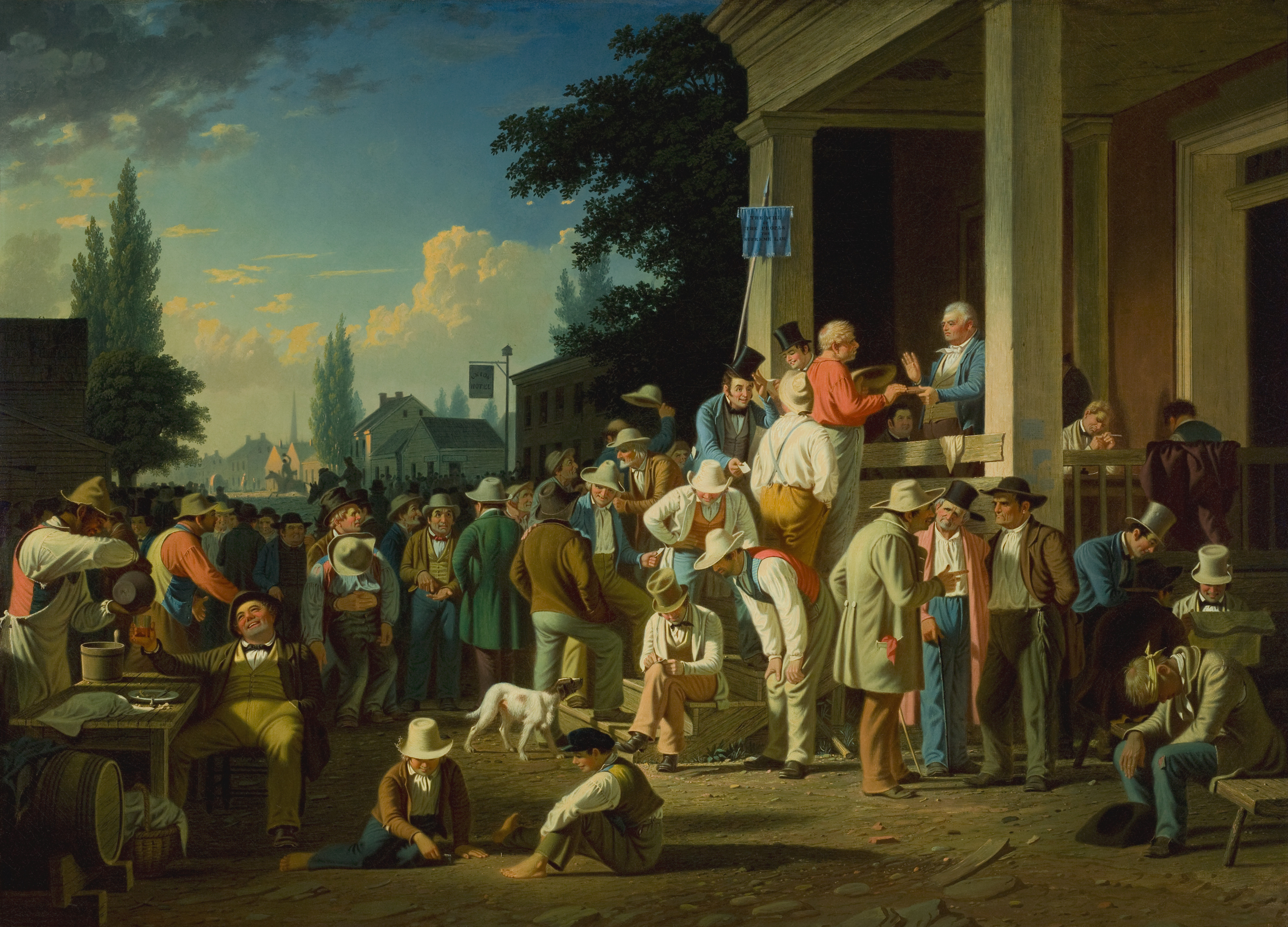 Every polling place should be flying the U.S. flag today.  You may fly yours, too.  In any case, if you have not voted already, go vote today as if our future depends upon it, as if our nation expects every voter to do her or his duty.

Today the nation and world listen to the most humble of citizens.  Speak up, at the ballot box.

Did you notice?  In Bingham’s picture, there are no U.S. flags.  You may fly yours anyway.

The whole world is watching.