Humor, or a crying need for grammar police?

Is this sign saying “Don’t do anything here,” or is it saying “Do anything you want here?”

Or, is it saying, “Doing everything at all times, is required?”

Photo by Amanda and Keith Holland, somewhere in the South:

A tree in the woods, with a sign nailed to it that reads, “POSTED: No Nothing, Cowden Plantation”

Indeed, the Notice to Airmen (NOTAM) is gone from the FAA website. 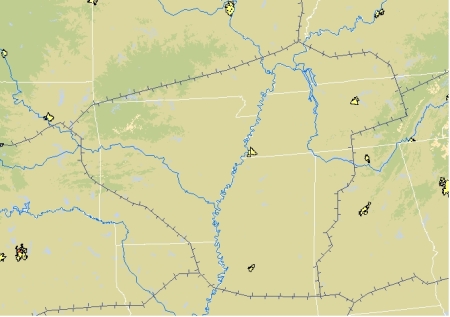 NOTAMS map of Arkansas on April 6, 2013 — no restricted areas shown

How’s that austerity working for you?

“Even the bad guys are feeling lucky.”

No problem for the rich!  Just hire private cops! Story in the Christian Science Monitor:

After people in Oakland’s [California] wealthy enclaves like Oakmore or Piedmont Pines head to work, security companies take over, cruising the quiet streets to ward off burglars looking to take advantage of unattended homes.

Long known for patrolling shopping malls and gated communities, private security firms are beginning to spread into city streets. While private security has long been contracted by homeowners associations and commercial districts, the trend of groups of neighbors pooling money to contract private security for their streets is something new.

Besides Oakland, neighborhoods in Atlanta and Detroit – both cities with high rates of crime – have hired firms to patrol their neighborhoods, says Steve Amitay, executive director of the National Association of Security Contractor.

“It’s happening everywhere,” Mr. Amitay says. “Municipal governments and cities are really getting strapped in terms of their resources, and when a police department cuts 100 officers obviously they are going to respond to less crimes.”

File this under the so-called conservative rich cutting off their fingers to spite their hands:  Does it ever occur to them that they would have more bankable cash if they didn’t have to hire a security service to guard their homes, but instead paid modest taxes to educate would-be criminals to do non-criminal work, and to provide police protection instead of private spies?

Didn’t Wayne LaPierre of the National Rifle Association say his agency would support bigger budgets to hire more cops?  Where is that lobbying action today?  What’s that — he was just jerking whose chain?  (I’d be more comfortable if I knew LaPierre does not regard Somalia as the model for how a national government ought to work.)