Beleaguered sign makers will tell you, sometimes it’s damnably difficult to make signs make sense to motorists who speed by faster than they should — and sometimes, the story is just too difficult for pictures.

What do you think, Dear Reader?

Responses cover a lot of territory, and of course the flying cows of “Tornado” and “Monty Python and the Holy Grail” got mentions.

Cheap county didn't want to pay for two signs, one with the, also it should be 500 ft. on the plaque. Source: it's how I make a living. pic.twitter.com/rqBxb71Onn

Other responses hint that some people may be modifying actual cow warning signs, in New Mexico or Nevada.

Not just once, but twice — so you know it must be true.

If you can read this sign, you’ve already violated the poster’s admonition.

Signs of life: Eagles on Highway

One of our local pharmacists travels on vacations, and takes photos.  Pharmacies being what they are, people wait in line with nothing to do but count ticks on the clock.  No one takes a book to the pharmacy to wait.

But the guy, Mark de Zeeuw, has a good sense of customer service.  He got one of those photo frames that had a video display to show photos.  Over time, it morphed to an extra computer screen, and probably an old computer (don’t know for sure).

At the Tom Thumb supermarket in Duncanville, Texas, customers get to see photos of the pharmacist’s travels.  A lover of travel and photography, and a too-frequent customer at the pharmacy, I think I may have seen every photo on that harddrive.  Many of them are very good. He travels to Alaska and across the American west, and he’s got at least one telephoto that works well on wildlife — this I know from watching the photos.  I’ve never discussed it with the guy (who is always busy working on prescriptions, or fighting with insurance companies over the phone; Tom Thumb’s being a large company, there may be other pharmacists on duty at the time).

Okay, I’m shy.  I’ve wanted to ask him for copies of several of the photos to share, one in particular.  It’s a nice shot of the yellow warning/information signs you see at the side of a highway.  With a bright blue sky in back, and obviously a lot of unpopulated territory, it says “Eagles On Highway.”  I broke the shyness enough to learn it was a photo from eastern Utah.

Yep! Wonders of Google, Bing and flickr:  Here’s a shot I found at Wanderlust Cafe:

“Eagles on Hwy.” Sign on eastbound Interstate 70, near the Moab turnoff in Utah. Photo by Lou Ann Granger, via Wanderlust Cafe

Out on Interstate 70, the rabbits and occasional ground squirrel, lizard or coyote fall victim to speeding cars in the night.  In the daylight, carrion eaters — including eagles — clean up the road.  Alas, eagles have not been bred to recognize those vehicles, tiny in the distance, rush at them at 70 miles per hour. Worse, it’s a violation of federal law and regulations to kill the eagles (few are ever cited for accidents).

Local authorities put up signs warning drivers of this odd hazard: “Eagles on Highway.” Drivers are supposed to slow down, be wary, and avoid hitting the eagles.

Others grew curious about the signs, too. The Deseret News in Salt Lake City explained back in 1990 that six of the signs were put up, in hopes of reducing kills of immature golden eagles.

They have to rank as the most unusual highway signs anywhere in the state. But preliminary indications are the six “Eagles on Highway” warning signs in central Utah are doing the job.

Not a single golden eagle was struck by a car during the 1989-90 winter season.In the two years previous, 30 golden eagles were killed and another 11 crippled by automobiles on a stretch of I-70 between the Colorado border and the San Rafael Swell.

“What we do know is we’ve received a lot of comments from people seeing signs and watching the birds and being aware of the problem. From a public awareness standpoint the program is a success.”

I wonder if we can track down someone in authority with numbers to show the signs are working after 25 years.  And maybe I can get a copy of pharmacist de Zeeuw’s photo here — his is better, I think.

END_OF_DOCUMENT_TOKEN_TO_BE_REPLACED

No shortcuts on the road to success; but watch out for low bridges

Many already caught the irony.

Not to embarrass, but just for the record, does anyone know when and where this picture was taken?

Update: Smart and alert commenters (see below) tell us this is in Mamaroneck, New York, at the intersection of Mamaroneck Ave and Halstead Ave, where Mt. Pleasant Ave comes in. Look at the bridge of the Metro North trains, and it appears that bridge gets hit a lot.

Tip of the old scrub brush to Andre Houser.

Signs of life: This is the Moon?

Saw this first on Twitter; found it on Pinterest with a claim it’s from Albuquerque, New Mexico.

Either way, it’s a very patient photographer, or one who really knows how to take advantage of serendipitous coincidence. Anyone know? Albuquerque does have a Moon Street, in the 87111 Zipcode. Can any of our Albuquerque readers verify?

To which @FionaCuffed added, “Baby sure does!”

I wonder where that store is, and I wonder if managers ever look at their own signs?

And if they do, do they chuckle?

(That could be a start of a poem, or maybe a short poem all itself:  “baby needs//beers & wines”)

Just as many commercial buildings do not have a 13th floor (though others do), sometimes in other businesses, there are other numbers that should, perhaps, be avoided.

404 is one of those to-be-avoided numbers.

Is it possible that passengers who board this bus never get off?

Population count seems too low, doesn’t it?  Must be a pretty tight filter.

Caption these yourself. From the City of Coffee City website. A good sign is self-explanatory. Alas, this came to me with no photo credit.

Still no credit, but I found it on Imgur.

Shake of the old scrub brush to Ellie!

Stay back from this truck

You know those mudflaps with Yosemite Sam holding two six-shooters, and the caption “Back Off!?”

Shouldn’t this truck have those mudflaps?  Or would that be redundant?

Photo of a California-based “honey wagon.” Via Dave Taylor and George Takei.

Tip of the old scrub brush to Dave Taylor and George Takei.

Not sure if this rises to a sign of intelligent life in the universe.

(If you’ve got details, put ’em in comments.  Thank you.)

Signs of life: No dogs

From Neatorama. I’m guessing the sign is in South Africa.

Humor in signage, especially with the kitty on top!

Where does this photo come from?

I’m not certain, but I think it’s from South Africa.  It showed up in Memebase from “unknown.”  A couple of links I found for other photos of similar signs showed they were in South Africa.

Anyone know for sure? 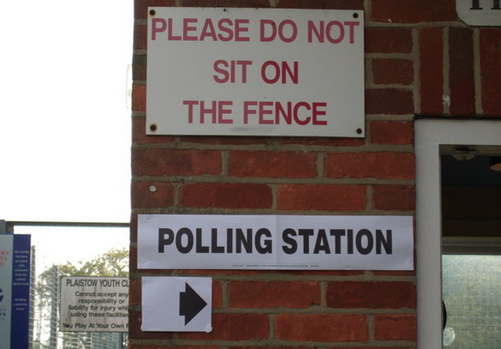