Pete Seeger and the Highlander School

It’s a stunning photograph, not for its photgrapher’s skills, nor the artistic nature of the taking.  It’s a true snapshot.  Five people on a farm in Kentucky, in black and white.  Probably the photographer used a Kodak camera made just for snapshots.

Except, it was 1957.  The farm is the Highlander School.  The five people in the photo include folksinger Pete Seeger, and Rosa Parks, and the Rev. Dr. Martin Luther King, Jr. 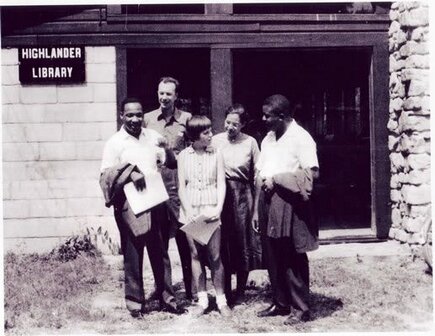 Who was the photographer?  Perhaps Myles Horton, the director of the school (and Charis’s husband).

In a sort piece filmed at his home in Beacon, New York, for the Highlander’s 75th Anniversary in 2007, Pete described the time and the occasion.

Don’t  you love the cricket singing along with Pete?

This entry was posted on Tuesday, January 28th, 2014 at 9:25 am and is filed under 1957, Civil Rights, History, Martin Luther King, Pete Seeger, Red Scare. You can follow any responses to this entry through the RSS 2.0 feed. You can leave a response, or trackback from your own site.

One Response to Pete Seeger and the Highlander School