Here’s just exactly the sort of thing that happens in nature that drives creationists nuts.  How could this happen without God personally working to confuse and/or delight the photographer?  Not to mention the physicist and mathematician. 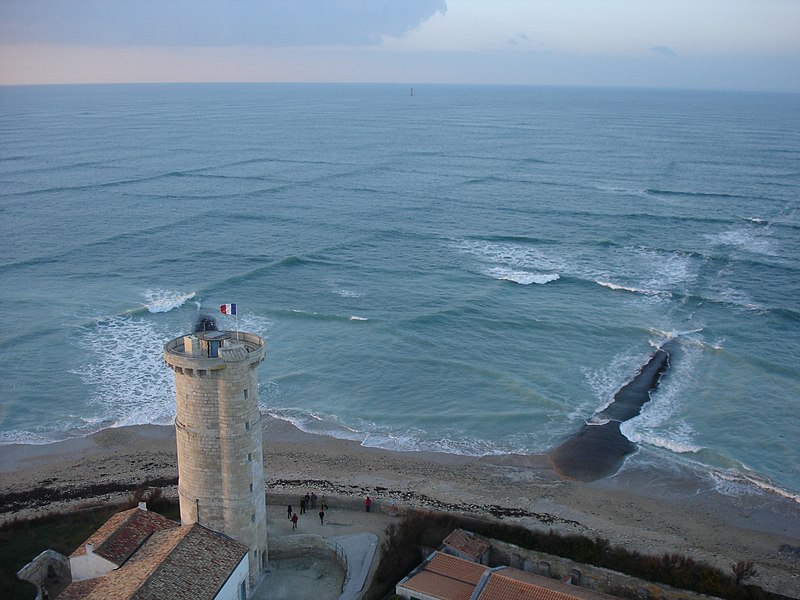 Where? Somewhere in France, one might gather from the flag on the structure (lighthouse?).

Turns out to be a Wikipedia photo, with this intriguing caption:

Crossing swells, consisting of near-cnoidal wave trains. Photo taken from Phares des Baleines (Whale Lighthouse) at the western point of Île de Ré (Isle of Rhé), France, in the Atlantic Ocean. The interaction of such near-solitons in shallow water may be modeled through the Kadomtsev–Petviashvili equation.

Oh, you remember that one, don’t you?  The Kadomtsev–Petviashvili equation?

At least we confirmed it was taken in France.

They do everything differently in France, don’t they?

Update:Got an e-mail suggestion that I include the equation itself.  You may certainly click to Wikipedia to find it; here’s what it says over there:

In mathematics and physics, the Kadomtsev–Petviashvili equation – or KP equation, named after Boris Borisovich Kadomtsev and Vladimir Iosifovich Petviashvili – is a partial differential equation to describe nonlinearwave motion. The KP equation is usually written as:

. The above form shows that the KP equation is a generalization to two spatial dimensions, x and y, of the one-dimensional Korteweg–de Vries (KdV) equation. To be physically meaningful, the wave propagation direction has to be not-too-far from the x direction, i.e. with only slow variations of solutions in the y direction.

Like the KdV equation, the KP equation is completely integrable. It can also be solved using the inverse scattering transform much like the nonlinear Schrödinger equation.

Certainly the longest equation ever published at Millard Fillmore’s Bathtub.

This entry was posted on Wednesday, April 16th, 2014 at 9:29 am and is filed under Creationism, Nature, photography, Science. You can follow any responses to this entry through the RSS 2.0 feed. You can leave a response, or trackback from your own site.