If great scientists had logos . . . 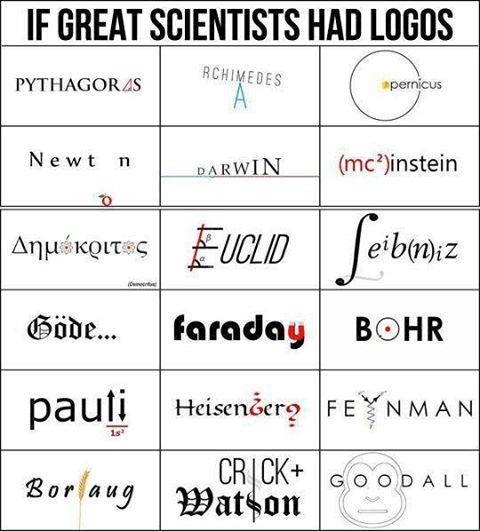 These are quite creative.  I wonder who invented them?

Every major league pitcher needs a change up; in politics, too

I don’t generally post these posters, except to take issue . . . but this one made me chuckle.

He created 9.9 million jobs in a record 53-month stretch of uninterrupted job growth.
He reduced the deficit by $800 billion within 5 years, and grew the stock market by 142% within his first 2,000 days.

Not Reagan, you idiot:  Obama.

Making those nice photographs of the Milky Way and stars isn’t so easy as it looks.

I made my most successful efforts on our recent swing through Colorado, New Mexico and West Texas.  Here’s a shot I got that almost shows the Milky Way, probably has Polaris in it, and because it was a timed exposure, also captured star movement and an airplane flying overhead.  Photo was taken from the Army Corps of Engineers campground at Abiquiu Reservoir, a few miles from Georgia O’Keefe’s home.

Remembering Warren Bennis isn’t enough. Read his books! DO what he says!

I come back from vacation, and no one tells me Warren Bennis passed on?

Why wasn’t that front page news, in every city with a corporation, a government, or a school?

Warren Bennis, in a publicity photo from the University of Southern California, the last of several academic institutions where he taught, or lead the entire school.

We know why. Bennis, who some claim invented the study of leadership in the modern world, is too little read in corporations — and almost never read in government, and probably never read in education leadership.

Try this experiment, you teachers:  As you go back to school this month for the “in service” sessions that challenge your ability to stay awake, ask your principals and administrators what their favorite Warren Bennis book, or idea, is.  If you find one who knows who Warren Bennis was, will you send us that person’s name for a Wall of Honor here?

Bennis wrote too abstractly for many.  He was not one who would have ever thought about writing The One Minute Manager, not because there aren’t some good ideas in that book, but because he wrote to the higher levels of organizational thinking.  (Our good friend Perry W. Buffington used to point out in his lectures that you’d run from the waiting room if you heard your neurosurgeon was reading the One Minute Brain Surgeon.  Bennis would have put it more gracefully, and taken three pages to do it — but a serious reader would understand.)

With all the trouble we have in organizations these days, you’d think Bennis’s work would be on everybody’s bookshelf, and assigned to all incoming interns.

Jena McGregor, who spoke with and corresponded with Bennis several times in the last decade, wrote a remembrance in the Washington Post:

Warren Bennis, who died Thursday in Los Angeles at age 89, was once called the “dean of leadership gurus,” a description that unfortunately stuck.

I say “unfortunately” because, for Bennis, there was never any kind of shtick. There was no silver bullet or four-box matrix or slide deck offering an oversimplified how-to guide to leadership. This giant among leadership experts — I take no exception to the “dean” part — was a thinker and an adviser, but not a guru. He wrote and talked about leadership as if the answers were still being shaped, even in his experienced mind.

He was a thoughtful, genuine, and always engaged man whom I came to know in these past eight years as a reporter covering management and leadership.

“I am as leery as anyone of the idea of leaping to conclusions, or making more of evidence than is demonstrably true,” Bennis wrote in his influential 1989 classic, On Becoming a Leader. “To an extent, leadership is like beauty: It’s hard to define, but you know it when you see it.”

For Bennis, leadership was a personal journey, something individual and introspective that must be learned through life’s experiences. He was a staunch believer that leaders are made not born, formed out of “crucible” moments and struggles that prepare them to lead. As he wrote in On Becoming a Leader — essential reading for anyone — leadership is about self-discovery and self-expression. “Before people can learn to lead, they must learn something about this strange new world.”

It may take me a few days to organize thoughts: Does it matter that he’s gone, if those who most need his work would never read it anyway?

Any guy who can look at a convention of high-paid CEOs and tell them that followers make them what they are, deserves much more than just a second thought.

What do others say?

.@geriwithetc @garthcello Another variation from my friend Warren Bennis, re successful transformers: "dreamers with deadlines."

"Leadership is the capacity to translate vision into reality." – Warren Bennis

"The first responsibility of a leader is to define reality. The last is to say thank you. In between, the leader is a servant"-Warren Bennis

A new leader has to be able to change an organisation that is dreamless, soulless and vision-less.–Warren Bennis

“Good leaders make people feel that they’re at the very heart of things, not at the periphery.” ~Warren Bennis #startup #leadership

"Leaders do not avoid, repress, or deny conflict, but rather see it as an opportunity ." -Warren Bennis #leadership

"I am reminded how hollow the label of leadership sometimes is and how heroic followership can be." — Warren Bennis #Leadership

(Note that the comments above came before news of Dr. Bennis’s death.)

Dr. Warren Bennis taught me more about myself than any professor I've ever had. He will be sorely missed by so many. http://t.co/mTDVFAWJPy

Sad news. Dr. Warren Bennis co-taught the most impactful class I took at @USC and had a profound impact on my life. http://t.co/44BqC4n0d1

The 'Dean' of Leadership Gurus Passes At 89: The essence of Warren Bennis’ management philosophy was a distinc… http://t.co/c7JzTZU3S4

We would expect David Gergen to know Bennis, and his work.

RIP #WarrenBennis "The leader who communicates passion gives hope and inspiration to other people,” http://t.co/myFUQXgaB5

Jack and I are very sad to hear about the passing of Warren Bennis. He was a great mind and a great man. http://t.co/5QQ1iGk2bk

We lost the great Warren Bennis on Friday, at 89. Our talk about collaboration: https://t.co/LySc3P1tDE Transcript: http://t.co/4QtiMPh0yE

Warren Bennis, in many ways my best friend, passed away in LA yesterday. I am saddened beyond measure.

In a lighter moment, Warren Bennis said this about his tenure as President of the University of Cincinnati: pic.twitter.com/xpT6BfPr9J

In 1983 #WarrenBennis advised:Don't take a job where the best you can be is a "perfect imitation" of others http://t.co/ApF0WeTVJk

Great Groups need to know that the person at the top will fight like a tiger for them. —Warren Bennis

I once took a survey among teachers, and not one said they thought their principal would fight to defend them; it was a small survey, but it discouraged me from pursuing the question more.

Warren Bennis, the Hemingway of #leadership, passed away on July 31, aged 89. A tribute, p.28: http://t.co/xNIPK4kKpn pic.twitter.com/vbE9BUOM2Y

As you will see from this blog post, Warren Bennis has influenced my work in tremendous ways. I am deeply saddened …http://t.co/KdqZ8Y7XJR

Warren Bennis was a HUGE inspiration for me in forming the story behind my PhD. Eternally grateful… http://t.co/kzYhENjMmq

"#Leadership is like beauty: It's hard to define, but you know it when you see it."–Warren Bennis http://t.co/GMioRhgCNu @WillYakowicz

"Leaders are not born. They are made." – Warren Bennis

Warren Bennis had his finger on the pulse of the "culture of work" long before it became a social media fad #McKQ50 http://t.co/eJJuvsAABG

As the business world observes the passing of Warren Bennis, watch his wonderful interview with @SMGDean last fall: http://t.co/fKKaP1z9lh

The process of becoming a leader is similar, if not identical, to becoming a fully integrated human being – Warren Bennis – rest in peace…

Leadership is the capacity to translate vision into reality – Warren Bennis