60 years ago this month: Disneyland, a gleam in Walt’s eye

Newspaper and public relations photography relied heavily on posed images such as this one, through most of the 20th century.  Cameras often were bulky.  For a good image, film was slow, with a lot of light needed.  Public groups often were taken out of an office or auditorium and posed in the sun, as here, just to get enough light.

By the end of the 1950s, faster films and smaller cameras encouraged more spontaneous photos of events.  Especially after the Kennedy presidential campaign hired a photographer to take candid shots, which showed up everywhere, candid photos started to take over newspapers.

Posing these photographs was an art itself, an art mostly lost these days.

American Experience reminded us at Facebook that December 3 is the anniversary of the day Illnois was admitted to the union in 1818, the 21st state.

Map of the Illinois territory, about 1818, the year the state was admitted to the union, on December 3.

Illinois entered the Union on December 3, 1818. The twenty-first state takes its name from the Illinois Confederation—a group of Algonquian-speaking tribes native to the area. An Algonquian word, “Illinois” means “tribe of superior men.”

Remnants of a much earlier Algonquin civilization thought the most sophisticated prehistoric society north of Mexico, are preserved at the Cahokia Mounds State Historic Site in the southwestern part of the state.

French explorers Louis Jolliet and Jesuit Father Jacques Marquette entered the Illinois region in 1673. Control of the territory passed to Great Britain in 1763. When the United States acquired the land that became Illinois Territory in 1783, most European settlers there were of French descent. In 1788, the Continental Congress received information concerning the inhabitants of the Illinois area. “There are sundry French settlements on the river Mississippi within the tract,” the committee reported:

Near the mouth of the riverKaskaskies, there is a village which appears to have contained near eighty families from the beginning of the late revolution. There are twelve families in a small village at la Prairie duRochers, and near fifty families—the Kahokia village. There are also four or five families at fort Chartres and St. Philips, which is five miles farther up the river. The heads of families in those villages appear each of them to have had a certain quantity of arable land allotted to them, and a proportionate quantity of meadow and of woodland or pasture. The Committee…referred the memorial of George Morgan…respecting a tract of land in the Illinois, June 20, 1788.
Documents from the Continental Congress and Constitutional Convention, 1774-1789

Twenty years later, Congress organized the Illinois Territory. Pioneers from Kentucky, Virginia, and Tennessee settled the southern part of the territory, while New Englanders ventured to northern Illinois via the Erie Canal.

Land of Lincoln, the state slogan, pays homage to famous son Abraham Lincoln. Born in Kentucky, Lincoln came to Illinois in 1830. He was instrumental, along with his colleagues in the Illinois legislature, in moving the state capital from Vandalia to Springfield. Settling there in 1837, Lincoln married socially prominent resident Mary Todd, practiced law, and built the political career that brought him the presidency in 1861.

Chicago, a minor trading post at the southwestern tip of Lake Michigan until the 1830s, developed into a railroad hub and industrial center. After the Civil War, industrialization attracted a new wave of immigrants. People from all over the U.S. and the world ventured to Chicago to work in the meat-packing and steel industries. Even the Great Conflagration of 1871 failed to prevent the Windy City from becoming one of the largest urban centers in the country. It remains the third most populous city and metropolitan area in the United States.

U.S., Illinois and City of Chicago flags in a stiff breeze at the Navy Pier, Chicago. Photo by John Junker, at flickr. (copyright to Junker, too)

Nice way to see a city.  From Daniel Chen.

Details offered from the photographer:

Tip of the old scrub brush to SuperVancouver. 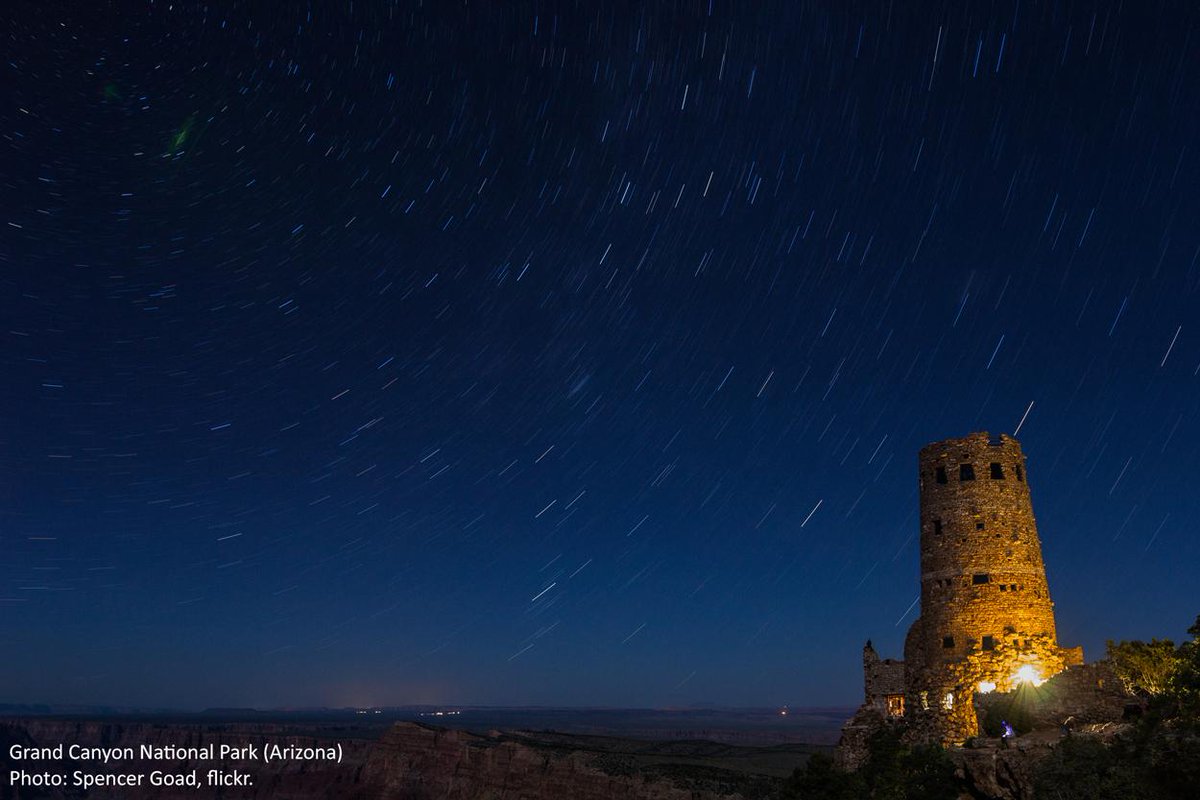 Wilderness Society on Twitter: Star trails over the famous Desert View Watchtower at the Grand Canyon. Have a good night… (Photo by Spencer Goad)