Post-election kissing and making up

Someone, now I forget who, sent me this little ditty in the wake of Barack Obama’s election victory in 2012.

The election is over,
The talking is done. Your party lost.
My party won.

So let us be friends,
Let arguments pass.
I’ll hug your elephant,
If you kiss my ass.

I wondered who wrote it.  My handwritten note says whoever sent it to me said they got it off the internet.

Who needs plagiarism with the WorldWide Web? The usual tendencies to attribute witty or snarky sayings to famous people, and to strip actual authorship, get huge boosts from the internet. Mark Twain said a good lie could get around the Earth seven times before truth gets its boots on — with the internet, the lies, falsehoods and lack-of-appropriate attribution pieces fly at the speed of electronic interchange, near the speed of light but for the copper in the wires.

Here, a couple of years later, it could come into use again. Have I learned any more about who wrote it? Not really.  I looked, and didn’t find an authoritative version with an author’s name attached, which looks to be final. 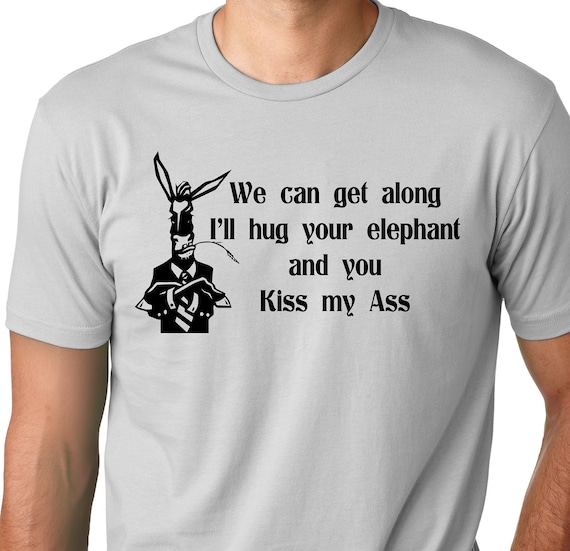 This version claims to come from 1972, and the re-election of Richard Nixon:

The election is over, the results are now known,
The will of the people has clearly been shown.

Let’s all get together and show by our deeds,
That we will give Dick all the help that he needs.

Let bygones by bygones and all bitterness pass,
I’ll hug your elephant if you kiss my ass.

The election is over, the results are now known.
The will of the people has clearly been shown.
We should show by our thoughts and our words and our deeds
That unity is just what our country now needs.
Let’s all get together. Let bitterness pass.
I’ll hug your elephant.
You kiss my ass.

We might assume it’s been around at least since Nixon’s second election then. I’ll wager it goes back farther into the recesses of history.

But does anyone know for sure? It’s been around long enough to have made the leap to bumperstickers, and other political paraphernalia.

Help us out in comments, if you have information.
[Update December 2020]

Handwritten note suggesting the poem comes no later than 1956; sadly, note comes from the wallet of a murder victim. History Nebraska blog

[Editor’s note: What was the image from Kaboodle.com, that is now no longer available there? December 2020]

This entry was posted on Sunday, December 21st, 2014 at 5:52 pm and is filed under Campaigns, Elections, History, Humor, Politics. You can follow any responses to this entry through the RSS 2.0 feed. You can leave a response, or trackback from your own site.

6 Responses to Post-election kissing and making up