Wind power ready for its closeup? 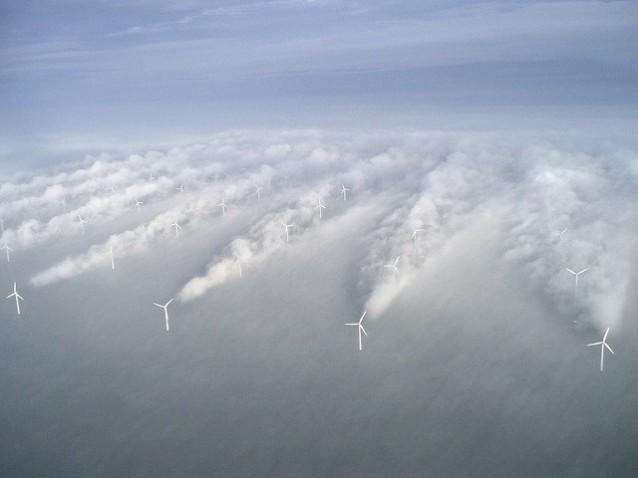 Awesome photograph, a 21st century version of those photos of men, machines, bridges and other industrial objects admired for their symmetry and sharp shadows from the 1920s and 1930s. I would guess it was captured by an airplane passenger passing over the at-sea windfarms springing up around Europe’s Atlantic Coast, off the coast of Denmark, if Climate Progress editors were careful.

Scientifically, the photo shows what happens when windmills reduce the air pressure downwind of the blades — condensation can suddenly become visible.  Condensation trails from windmills (won’t that vex the hell out of chemtrails tinfoil hatters?).

The photo illustrates what should be good news:

Denmark has been long been a pioneer in wind power, having installed its first turbines in the mid-1970s when oil shocks sent the import-dependent nation on a quest for energy security. Thirty-seven years later, the country has set a new world record for wind production by getting 39.1 percent of its overall electricity from wind in 2014. This puts the Northern European nation well on track to meet its 2020 goal of getting 50 percent of its power from renewables.

The news of Denmark’s feat adds to the national records the U.K. and Germany set for 2014 and further establishes Europe as a leader in the wind power industry. This is especially true when it comes to offshore resources, as countries like Scotland, England, and Denmark build out their offshore wind farms. Wind generated enough electricity to power just over 25 percent of U.K. homes in 2014 — a 15 percent increase from 2013. In December, Germany generated more wind power, 8.9 terawatt-hours, than in any previous month.

A big source of the surge of Denmark’s wind production this year came from the addition of around 100 new offshore wind turbines. In January of 2014, the peninsular country got just over 61 percent of its power from wind. This is more than three times the overall production of 10 years ago, when wind only made up 18.8 percent of the energy supply. The country has a long-term goal of being fossil fuel-free by 2050.

Anti-greens, and rational conservationists, see trouble though. Anti-greens holler that the windmills “kill birds,” as if the coal power plants the windmills displace do less environmental damage.  They will bring this up in every discussion of alternative energy sources, and in every discussion of working to reduce carbon dioxide emissions to decrease pollution and damage from climate change.  I suppose they want us to throw up our hands and give up on conservation.  (Industry agents like CFACT have no compunction against giving half-truths on these issues.)

Conservationists, like Chris Clarke, see the dangers.  Bird kills do occur at wind farms, in greater numbers than any conservationist is comfortable with.  Off-shore wind farms could hammer migrating populations of songbirds and other migratory fowl, in addition to the sea-dwelling birds.  Few solid studies on bird damage exist.  We are particularly the dark about the songbirds, who migrate in enormous avian clouds at night.  An article in Nature sums up issues:

Wind turbines kill far fewer birds in general each year than do many other causes linked to humans, including domestic cats and collisions with glass windows. But wind power has a disproportionate effect on certain species that are already struggling for survival, such as the precarious US population of golden eagles (Aquila chrysaetos canadensis).

“The troubling issue with wind development is that we’re seeing a growing number of birds of conservation concern being killed by wind turbines,” says Albert Manville, a biologist with the US Fish and Wildlife Service in Arlington, Virginia.

It is good news that wind power can replace fossil fuels. But industrial-sized enterprises inherently create environmental problems. Our policy makers need to be alert to the issues involved, and create incentives for development of alternative energy sources that will prevent our falling into the rut of industrial development that comes at enormous costs pushed to future generations.

Who is looking out for the birds? Can there be anyone who argues we should give up on climate change because of problems from alternative energy, really?

Chris Clarke tells us the problems, that we need accurate, relevant information, and we don’t have a methodical process to get it:

The issue of eagles being harmed by wind turbines in the U.S. is a huge topic, to put it mildly. And yet a paper documenting two eagle mortalities at a wind turbine facility in the last 20 years is “conceptually novel” enough to merit publication in a prestigious wildlife science journal.

Put it this way: The scientific community has more information on deaths among marine mammals, which spend much of their time in places it’s hard for us to get to, than it does about injuries and deaths to rather conspicuous birds in industrial facilities. Hell, we have better, more solid data on planets outside our solar system than we do on eagle mortalities at wind energy plants in California.

One could ask the rhetorical question “why is that the case,” but it’s almost a waste of time: it’s because wind energy companies would strongly prefer that data never gets released to the public.

And that’s what peer-reviewed journals are, for all their abstruse language and incomprehensible math and absurd paywalls: public information. Once that data gets analyzed and put in context by independent biologists, it becomes available to us all.

Minimizing wildlife mortality at wind farms is a major goal of conservation, although research on how best to do that is in short supply. Compiling and publishing accurate data on mortality of Golden Eagles over time is an important first step in efforts to protect these iconic birds.

And doing so in the clear light of day is crucial if we in the public are ever to make scientifically sound decisions about our energy policy, regardless of whether we put windpower or wildlife first.

Who will provide that information? Who will even ask for it? If we can’t get consensus on whether we should save humanity’s home on Earth, how can we get consensus on asking the questions about how to go about it, and how to learn how to do it?

This entry was posted on Saturday, June 27th, 2015 at 11:10 am and is filed under Climate change, climate_change, Conservation, Energy, Environmental protection, Science, Travel, Wind Power. You can follow any responses to this entry through the RSS 2.0 feed. You can leave a response, or trackback from your own site.