Madison, Clay and Huxley: June 29 is a day of passings

Three great historical figures passed on June 29 — and I’ll wager there are others, but I stumbled on these three in the past day.

Henry Clay falls into that history between the founding and the Civil War, when he won the name “the Great Compromiser” for his ability to put together agreements and laws that patched things up for a while — holding the south in the union, but not giving in to expansions of slavery, for example.  Clay wanted to preserve the union, but he wanted full support from citizens in all corners of the nation. He wrote words perhaps relevant to political contretemps of today:

I implore, as the best blessing which Heaven can bestow upon me upon earth, that if the direful and sad event of the dissolution of the Union shall happen, I may not survive to behold the sad and heart-rending spectacle.

Henry Clay, photo by Mathew B. Brady between 1850 and 1852; Library of Congress archives.

There’s a longer article on Clay’s amazing life and achievements at LOC’s “Today in History.” The Library of Congress also gives a brief summary of Clay’s history:

Thomas Huxley’s passing, on June 29, 1895, earns a spot on the calendar of events at Smithsonian.com 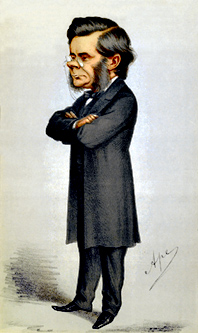 Thomas Henry Huxley, in an 1871 drawing by Carlo Pellegrini for Vanity Fair.

Huxley’s quote is one more indictment of people affected by the Dunning Kruger effect, something I just became aware of yesterday.  Yes, I need to source it better.

Upon reading Darwin’s big book, Origin of Species, Huxley wrote Darwin on November 23, 1859, one week after the book was published:

I finished your book yesterday. . . Since I read Von Baer’s Essays nine years ago no work on Natural History Science I have met with has made so great an impression on me & I do most heartily thank you for the great store of new views you have given me. . .
As for your doctrines I am prepared to go to the Stake if requisite. . .
I trust you will not allow yourself to be in any way disgusted or annoyed by the considerable abuse & misrepresentation which unless I greatly mistake is in store for you. . . And as to the curs which will bark and yelp — you must recollect that some of your friends at any rate are endowed with an amount of combativeness which (though you have often & justly rebuked it) may stand you in good stead —
I am sharpening up my claws and beak in readiness

Who else died on June 29 whom we should remember?

This entry was posted on Monday, June 29th, 2015 at 5:43 pm and is filed under History, James Madison. You can follow any responses to this entry through the RSS 2.0 feed. You can leave a response, or trackback from your own site.

3 Responses to Madison, Clay and Huxley: June 29 is a day of passings