A stunning photograph, with much to think about.  It wandered around the internet a couple of years ago, and it’s good enough, it’s going around again.

It’s an x-ray of a stingray. Consider what Charles Darwin might have thought about such an image. It’s a species discovered only in the last decade, imaged by a means of photography not known to be possible until more than a decade after Darwin’s death. What would he make of the discovery of a species, and the ability to see inside the thing, showing the cartilaginous skeleton (compare with the rays’ cousins, the sharks), and showing the organs Darwin knew would be there if evolution was, in fact, accurate. 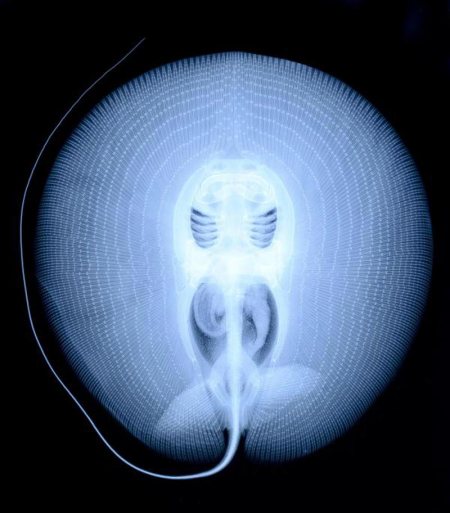 Caption from TwistedSifter: “The photograph above is an x-ray of a freshwater stingray species discovered in 2011 in the Amazon rain forest. The discovery was made by the research team of Nathan Lovejoy, a biologist at the University of Toronto in Scarborough; and Marcelo Rodrigues de Carvalho of the University of Sao Paolo in Brazil. The new species is known as Heliotrygon gomesi. Besides the pancake-like appearance, the ray is big, with slits on its belly and a tiny spine on its tail.” Photo by Ken Jones.