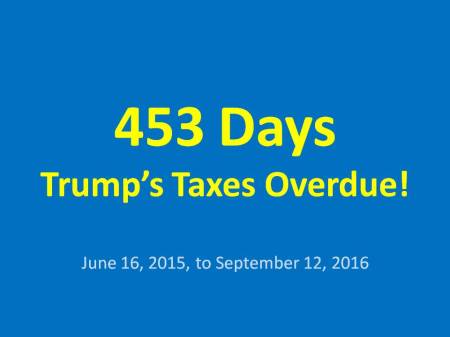 But Trump has not released his taxes since that day. 453 days Trump has refused to show his honesty to America.

Despite past promises, Donald Trump now says his taxes are “none of your business.”
If he were applying to the U.S. to be a refugee from ISIS, he could not qualify, due to his lack of candor. Should he be president if he can’t be a refugee?

Update: Trump promised a Cadillac campaign; but we got a Smart 453 instead. 453-day delay in releasing his taxes.

This entry was posted on Monday, September 12th, 2016 at 3:34 pm and is filed under 2016 Elections, Campaigns, Taxes. You can follow any responses to this entry through the RSS 2.0 feed. You can leave a response, or trackback from your own site.