Most Utah citizens regard themselves as patriots. It’s a state where almost every home has at least one U.S. flag, and where many neighborhoods will be festooned with them on any U.S. holiday.

January 4 is Utah’s statehood day. I ran across this photo of the picturesque McPolin Barn in Park City, Utah, up in the Wasatch Mountains in ski country.

For Utah Statehood day, I pass it along: U.S. flag displayed on the McPolin Barn, Park City, Utah. Date unknown, photographer unknown (if you can identify the photographer, please do!) 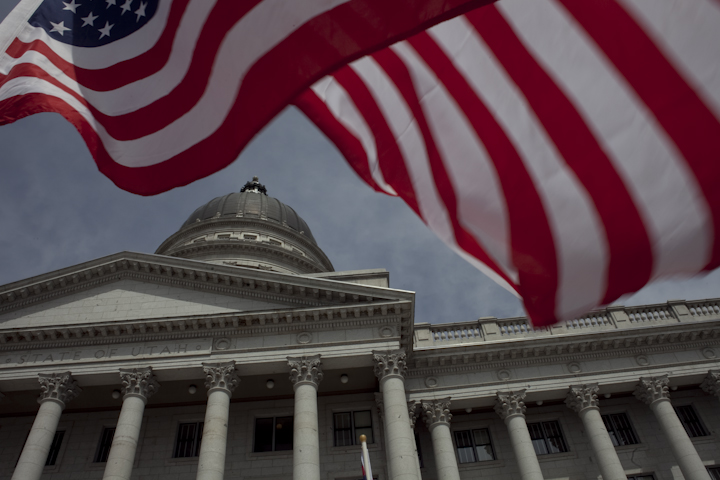 U.S. flags fly in Utah today in honor of Utah statehood. It’s also the day that new, elected state officers take their oaths and take their offices. Utah is 121 years in the union — as a state, it’s old enough to drink, though you may have difficulty finding a drink there among the teetotaling Mormons.

Utah joined the Union on January 4, 1896.  It had been a 49-year slog to statehood for Deseret, the Mormon settlement in the Desert.  The size had been pared down, so it would not be the biggest state, incorporating parts of what is now Nevada, Arizona, Oregon, Idaho, Colorado and New Mexico.  New capitals had been tried and cast aside (Fillmore, Utah).  Democratic Party rule was broken when LDS church authorities went door-to-door, calling every other family to the Republican Party, and party parity.  The Mormon Church abandoned polygamy, and adopted a state constitution that gave the vote to women.

You may fly your U.S. flag today for Utah statehood, especially if you’re in Utah.

One of my favorite Utah photos: U.S. flag at the south end of Mount Timpanogos; photo from Orem, Utah, by Bob Walker.