Snow geese coming at you 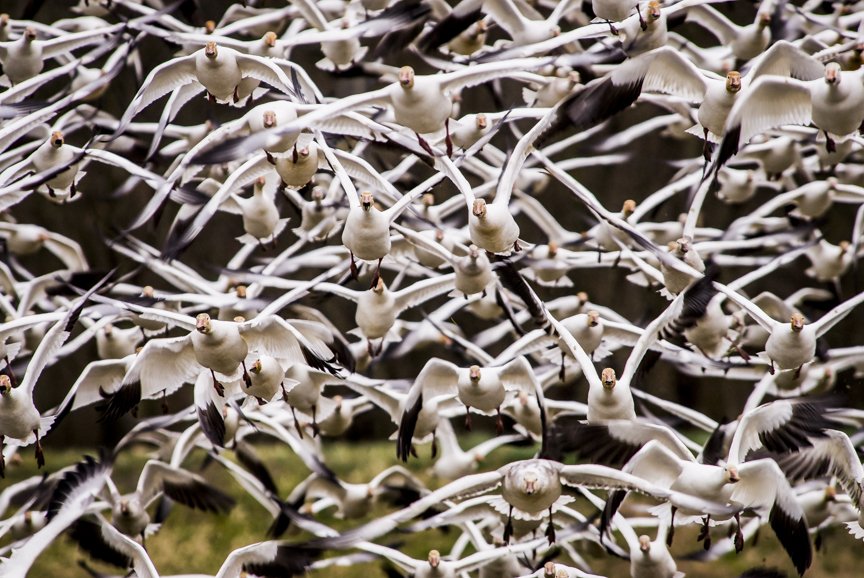 Nancy J. Wagner on Twitter: Seeing 1000s of #snow #geese flying towards me was breathtaking. Looks chaotic, but they take to the air very methodically. #Skagit #birding

I’m not familiar with Ms. Wagner’s work, but it seems we should be. Wagner shoots wildlife that would make nice adornments for your home and office walls, truly inspiring.

Alaska Territorial Gov. Bob Bartlett in center, with the 49-star flag (Bartlett was one of Alaska’s first U.S. senators).

The great service at the New York Times site, the Learning Network, notes the 1959 Dwight Eisenhower proclamation of Alaska as the 49th state, and the unveiling of the 49-star flag:

On Jan. 3, 1959, President Dwight Eisenhower signed a proclamation admitting Alaska to the Union as the 49th state. The New York Times noted that the signing included the unveiling of the new 49-star American flag.

The land that became Alaska came into U.S. possession in 1867, when William Seward, secretary of state under President Andrew Johnson, negotiated a deal to buy the 586,000-square-mile area from Russia for $7.2 million, less than 2 cents per acre. Seward’s decision was ridiculed in the American press, who saw no potential in the vast, inhospitable and sparsely populated area.

For decades after its purchase, Alaska was derided as “Seward’s folly” or “Seward’s icebox.” This opinion changed in 1896 with the discovery of gold in the neighboring Yukon Territory, which spurred tens of thousands of people to head to Alaska in search of gold. The gold rush also brought about a boom in mining, fishing and trapping.

Though the first statehood bill had been presented to Congress in 1916, there was little desire in either Alaska or Washington for Alaskan statehood until after World War II. During the war, the U.S. established multiple military bases to resist Japan’s attacks on Alaska’s Aleutian Islands and prevent a potential invasion of the mainland. The military activity, along with the completion of a major highway from Montana, led to a large population growth.

In 1946, Alaskans voted in favor of statehood in a referendum and Alaskan delegates began to lobby Congress for statehood. After years of debate, Congress voted in June 1958 to admit Alaska.

49-star flags were produced only until August 1959, so there are few of them around.  I love this photo of the unveiling of the flag with President Eisenhower:

“Quartermaster General MG Andrew T. McNamara and President Eisenhower examine new 49 star flag” – image and caption from the Quartermaster Foundation. Photo by Bob Schutz, Associated Press (Who are the other two people?  The guy on the right is Pennsylvania’s Sen. Hugh Scott.)

It had been about 47 years since the previous state admission (Arizona); people became aware that no law set what the flag should look like.  President Eisenhower issued a directive.

How did the nation survive for 170 years without firm, decisive and conclusive orders on what the U.S. flag should look like?  Isn’t it a great story that we went so long without law setting the requirements?

Alaska’s state flag came from the imagination of a 13-year-old Aleut, Benny Benson, winning a contest to design the state’s flag.  Alaska’s flag stands out in any display of U.S. state flags.

Alaska’s flag as it was approved by the state legislature, and still flies today. Image from the Ninilchik Natives Association, Inc (NNAI).

January is loaded with flag flying dates, when we add in statehood days, dates those states are invited to fly their U.S. flags.

In January 2017, the U.S. Flag Code urges citizens to fly flags on these dates, listed chronologically:

You may fly your flag any other day you wish, too; flags should not be flown after sundown unless they are specially lighted, or at one of the few places designated by Congress or Presidential Proclamation for 24-hour flag flying.  According to Wikipedia’s listing, those sites include:

Flag House in 1936, where Mary Pickersgill sewed the garrison-sized, 15-star flag that flew over Fort McHenry at the Battle of Baltimore in 1814; one of the sites where the U.S. flag may be flown 24 hours. The house is at 844 East Pratt & Albemarle Streets (Baltimore, Independent City, Maryland). Cropped image courtesy of the federal HABS—Historic American Buildings Survey of Maryland.