Encore: George H. W. Bush’s letter to Bill Clinton reminds us what we have lost

Composite, photo of President Clinton and President Bush, and the letter Bush left for Clinton to find on his first day as president. PHOTO: Composite. Frank Micelotta/Getty Images, sabagl/Twitter, via Glamour

On the death of President George H. W. Bush, I think it’s good to revisit the evidence that, on the surface, a little deeper, and deep down, George Bush the elder was just a very decent, kind human being. We should celebrate his decency and kindness, and encourage it in others.

Most of this post is a repeat from just before the elections in 2016.

George H. W. Bush was always gracious. In his last hours in office, he penned a personal letter to the man who had defeated him, Bill Clinton. He left the letter on the President’s Desk in the Oval Office, one of the first things Clinton would see after the ceremonies, and as the weight of his new job began dragging him into reality. 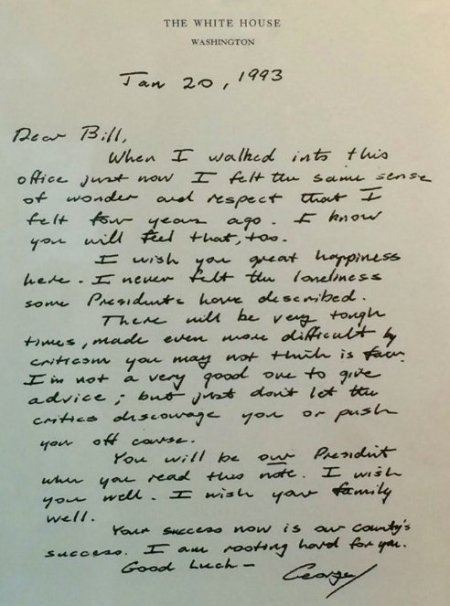 This entry was posted on Saturday, December 1st, 2018 at 3:26 am and is filed under Historic documents, History, Patriotism, Politics, Presidents. You can follow any responses to this entry through the RSS 2.0 feed. You can leave a response, or trackback from your own site.

2 Responses to Encore: George H. W. Bush’s letter to Bill Clinton reminds us what we have lost