District 15 for the Texas State Board of Education covers 77 counties in Texas’s northern Panhandle.  It’s oil (Midland), cotton, Texas prairie and small towns, and lots of schools, and some surprisingly good colleges and universities.

Texas State Board of Education District 15, TFN image – “District Overview
District 15 is huge, covering all of northwestern Texas. It is also arguably the most Republican SBOE district, giving more than 74 percent of the vote to Sen. John McCain in the 2008 presidential election and more than 70 percent to Gov. Rick Perry in the 2010 gubernatorial race.”

It’s a district where science plays a big role, and should play a bigger one.  The 15th includes those lands in Texas where the Dust Bowl got started, where unwise plowing based on inaccurate readings of climate contributed to one of the greatest man-made natural resources disasters in all of history.  It’s the home of Texas Tech University, where members of the chemistry faculty created a wine industry based on the chemistry of grape selection and fermentation, and where geologists learn how to find oil.

In short, science, engineering and other technical disciplines keep this area economically alive, and vital at times.

Of the two candidates, Democrat Steve Schafersman is a scientist, and a long-time, staunch defender of science education (what we now cutely call “STEM” subjects:  Science, Technology, Engineering and Math).  If the race were decided by a test in STEM subjects, Schafersman would be the winner.  Schafersman lives in Midland.

The GOP candidate in the race is religiously anti-science, Marty Rowley of Amarillo.  As a good-ol’-boy, former pastor, he’s got a lot of support from the usual suspects.  Rowley’s views on science, technology, engineering and mathematics run contrary to the business and farming interests of his entire district.  Do his supporters look to the future?

Do you vote in Midland, Lubbock, Amarillo, Dalhart, Abilene, San Angelo, Dallam County, Tom Greene County, Cooke County or Montague County?  You need to vote for Steve Shafersman.  Do your children a favor, do your schools a favor, and do your region of Texas a favor, and vote for the guy who works to make education good.

Shafersman is the better-qualified candidate, and probably among the top two or three people with experience making the SBOE work well, in the nation.  He deserves the seat, and Texas needs him. A song for our times: Arlo and Pete sing Woody

In the late 1960s and the 1970s, conservatives made big displays of singing this song.  The Mormon Tabernacle Choir recorded one very popular version of it; it showed up often.  In those occasional complaints about the difficulty of singing “The Star-Spangled Banner,” this song’s suitability for national anthem status was always raised.

Today?  I haven’t heard it at a Republican gathering in long, long time.  I’m not saying that it’s completely disappeared from the conservative song book — among other things, I don’t attend Republican conventions as often as I once did, but I don’t think I’d hear it if I did.  I am saying that people finally started listening to the song, and it’s been largely dropped from conservative sing alongs for political reasons.

And that tells us a lot.

Arlo Guthrie and Pete Seeger leading the congregation in singing Woody Guthrie’s “The Land Is Your Land,” from a 1993 concert at Wolf Trap Farm Park in Virginia (one of my favorite venues for any music):

(Arlo’s got a new release this year, featuring this tune.) 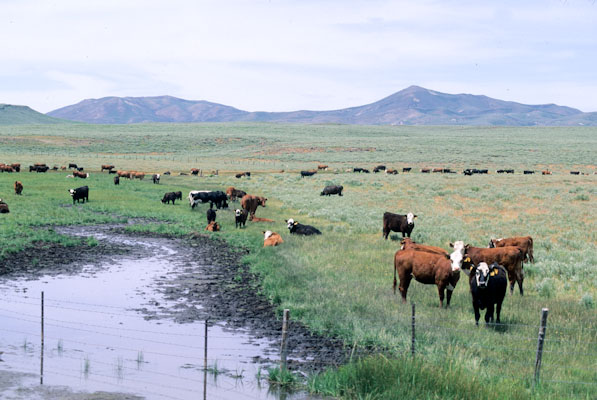 Soil erosion in Virginia, photo by W. C. Lowdermilk “Figure 15. — A formerly productive field in Virginia that has been cut to pieces by gully erosion. About 50 million acres of good farm land in the United States have been ruined for further practical cultivation by similar types of erosion.”

From Conquest of the Land through 7,000 Years, by W. C. Lowdermilk, its first director, a soil conservation publication of the U.S. Soil Conservation Service, first issued in about 1939:

When in Palestine in 1939, I pondered the problems of the use of the land through the ages. I wondered if Moses, when he was inspired to deliver the Ten Commandments to the Israelites in the Desert to establish man’s relationship to his Creator and his fellow men — if Moses had foreseen what was to become of the Promised Land after 3,000 years and what was to become of hundreds of millions of acres of once good lands such as I have seen in China, Korea, North Africa, the Near East, and in our own fair land of America — if Moses had foreseen what suicidal agriculture would do to the land of the holy earth — might not have been inspired to deliver another Commandment to establish man’s relation to the earth and to complete man’s trinity of responsibilities to his Creator, to his fellow men, and to the holy earth.

When invited to broadcast a talk on soil conservation in Jerusalem in June 1939, I gave for the first time what has been called an “Eleventh Commandment,” as follows: Thou shalt inherit the Holy Earth as a faithful steward, conserving its resources and productivity from generation to generation. Thou shalt safeguard thy fields from soil erosion, thy living waters from drying up, thy forests from desolation, and protect thy hills from overgrazing by thy herds, that thy descendants may have abundance forever. If any shall fail in this stewardship of the land, thy fruitful fields shall become sterile stony ground and wasting gullies, and thy descendants shall decrease and live in poverty or perish from off the face of the earth.