Our goldfinches left several weeks ago.  The cedar waxwings came through in at least three big waves, starting in February (and the last just over a week ago).  House finches moulted, and the breeding males have bright red heads. Migrating robins left us by the end of January, but a lot more residents stayed with us.

We have at least one, and maybe three cardinal families.  A black-capped chickadee family stuck around.  Haven’t seen a titmouse in a month, but I think they’re still in the neighborhood.  The black-chinned hummingbird family is back, and maybe a few other hummers.  The resident blue jays and white-winged doves duke it out every day.  Carolina wren stayed, and may have already fledged; but there are too many wrens for one family — is that a Bewick’s wren? 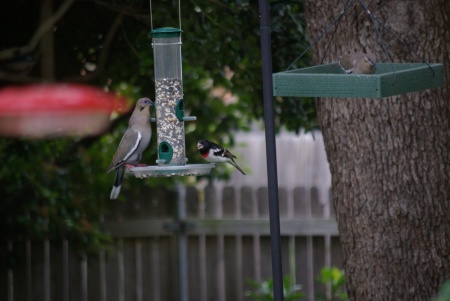 It’s a rose-breasted grosbeak, Pheucticus ludovicianus.  It seems late for migrating birds, but only because so many migratory species migrate earlier these days.

Haunts of the rose-breasted grosbeak, from Cornell University’s ornithological laboratory.

Would love to have a grosbeak family, but the Cornell ornithologists say this is fly-through territory.  Maybe that explains why it won’t scare by the white-winged dove, Zenaida asiatica.  Dallas is the western edge of the grosbeaks’ migratory path, but the eastern edge of the dove’s territory.  They probably don’t see much of each other.

We don’t even advertise clean restrooms.