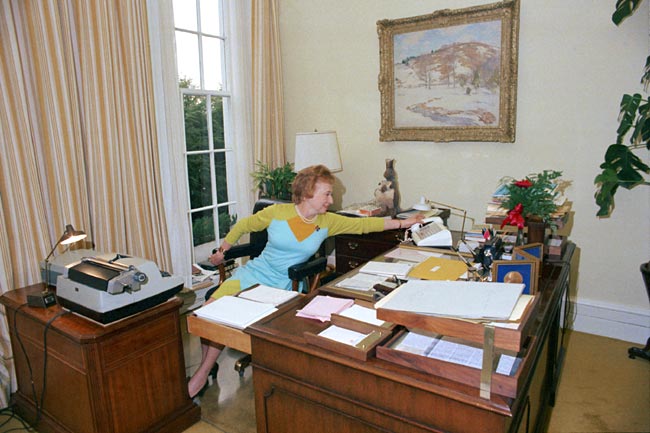 President Richard Nixon’s secretary, Rosemary Woods, demonstrates how she thought she might have accidentally erased 18-1/2 minutes of tape, when she reached to answer her phone and her foot extended to the “erase” footpedal, in 1974.

Ms. Woods’s typewriter is an electric, as best I can make out, an IBM. (Update, May 21, 2008: Ben Batchelor of etypewriters.com dropped by in comments to say it’s an IBM Model D Executive. Thanks, Ben!)

Tip of the old scrub brush to Dr. Pamela Bumsted.

This entry was posted on Monday, October 22nd, 2007 at 1:22 am and is filed under History, Politics, Presidents, Richard M. Nixon, Typewriters. You can follow any responses to this entry through the RSS 2.0 feed. You can leave a response, or trackback from your own site.

15 Responses to Typewriter of the moment: White House, Rosemary Woods