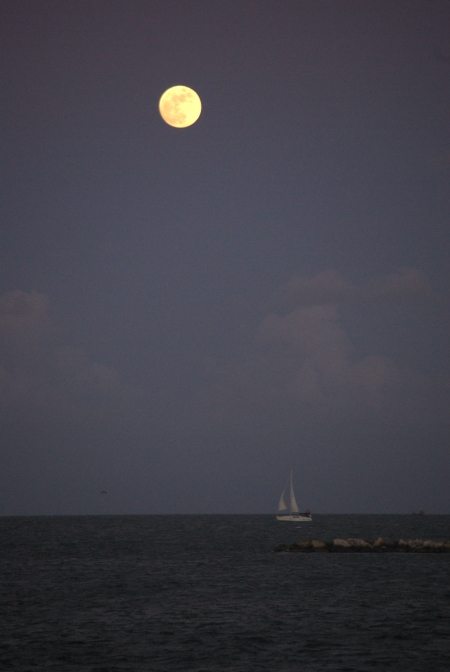 This is the scene that greeted delegates to the Texas Democratic Convention as they left the American Bank Center in Corpus Christi, Texas, at about 8:00 p.m. last Friday, June 25.  (Natural light photo, handheld, 1/60th exposure at ISO 400)

The Moon was near full, and the tide was good for sailing.

In my brief period as a Sea Scout, I most enjoyed evening and night sailing.  Water is astoundingly quiet at dusk and later, when sailing.  In Corpus Christi I got a half-dozen shots and lamented I didn’t have a tripod, to get a better shot of the Moon.

I thought of Shakespeare:

There is a tide in the affairs of men
Which, taken at the flood, leads on to fortune;
Omitted, all the voyage of their life
Is bound in shallows and in miseries.
On such a full sea are we now afloat,
And we must take the current when it serves,
Or lose our ventures.

Quote of the moment: Frank Zappa, on hydrogen or stupidity Actually, I think the claim is that hydrogen is the most common element in the universe, since it’s so simple.  Its abundance is a result of that simplicity.

Physics in 2010 would probably go for dark matter as even more plentiful than hydrogen, but so little is known about dark matter.  As we learn more about dark matter, we could discover Zappa was a physics theorist before his time.  It’s a short line from Zappa to Zwicky.

I’m relieved to have a credible source for the quote — I had found it attributed to Einstein, another case of Darrell’s Law of Quote Misattribution (“any good quote whose source is unknown will be attributed to Jefferson, Lincoln or Einstein; consequently any quote attributed to those people should be sourced before being taken as accurate”).

A couple more I’d like to put to bed, both attributed to Einstein:

Educating for a creative society

Just as a reminder about what we’re doing in education, I hope every teacher and administrator will take three minutes and view this video (that allows you some time to boggle).

Surely you know who Tom Peters is.  (If not, please confess in comments, and I’ll endeavor to guide you to the information you need.)

Technically, Texas’s early elementary art standards are not so bad as Peters describes them.  But, check this document, from the Texas Education Code (§117.1. Implementation of Texas Essential Knowledge and Skills for Fine Arts, Elementary).  Do a search of the Texas standards and count how many times students are expected to stay “within guidelines.”