U.S. and Maryland flags flown together. Photo from the Maryland Secretary of State’s office.

Maryland’s convention to ratify the Constitution voted approval on April 28, 1788, the sixth of the former British colonies to ratify.

April 28 is considered Maryland’s statehood date.  According to the suggestions for proper times to fly the U.S. flag, Marylanders should fly their flags on April 28.

It’s only my opinion, but I think there is no grander display of a state and U.S. flag than with Maryland’s.  Maryland’s flag is a unique design in the state flags, and it features colors not common to state flags.  Our displays of both flags at our Maryland home often drew comments from passers-by (we lived on the street leading to the town’s Metro stop, so there was a lot of foot traffic.

The Maryland flag is divided into four quarters. The first and fourth quarters consist of six vertical bars alternately yellow (representing gold) and black with a diagonal band on which the colors are reversed. The yellow and black quarters represent the family arms of the first proprietor of Maryland, George Calvert, first Lord Baltimore. The second and third quarters consist of a quartered field of red and white (representing silver) bearing a Greek cross with arms terminating in trefoils. The colors in the second and third quarters alternate, with red on the white ground and white on the red. The red and white quarters display the arms of Lord Baltimore’s maternal family, the Crosslands.

The flag was officially adopted only in 1904.  Maryland also has a detailed, but not too lengthy set of instructions on proper display and other care of the state flag. 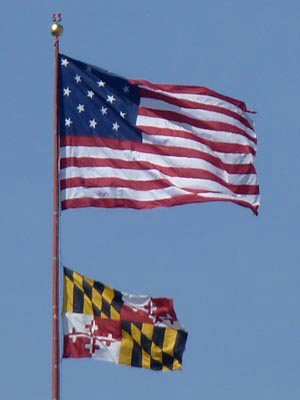 From the W&M Blogs: “American and Maryland flags flying high over downtown Baltimore. Just why does the American flag have 15 stars and stripes? Think about Baltimore’s Fort McHenry and Francis Scott Key.”

Baltimore Harbor is home to Fort McHenry, the fort whose siege inspired Georgetown lawyer Francis Scott Key to write a poem about the U.S. flag, which became our national anthem.  Partly due to this history, U.S. flags in Maryland often are the historic, 15-star/15-stripe flag that inspired Key. 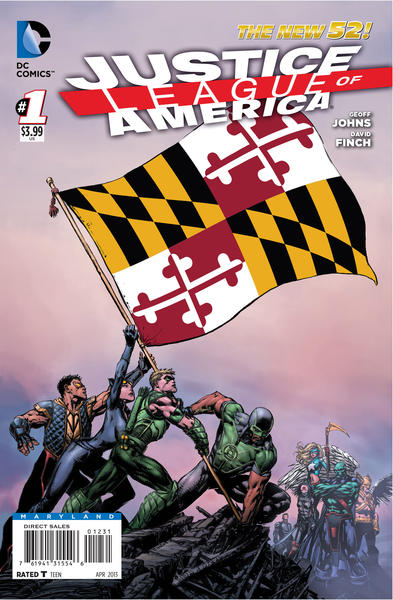 Maryland flag on the cover of a Justice League of America comic book.

This entry was posted on Sunday, April 28th, 2013 at 1:44 am and is filed under Flag etiquette, Fly your flag today, History, Statehood. You can follow any responses to this entry through the RSS 2.0 feed. You can leave a response, or trackback from your own site.