It was a Tweet from the Secretary of Energy, Ernest Moniz, so it must be so: 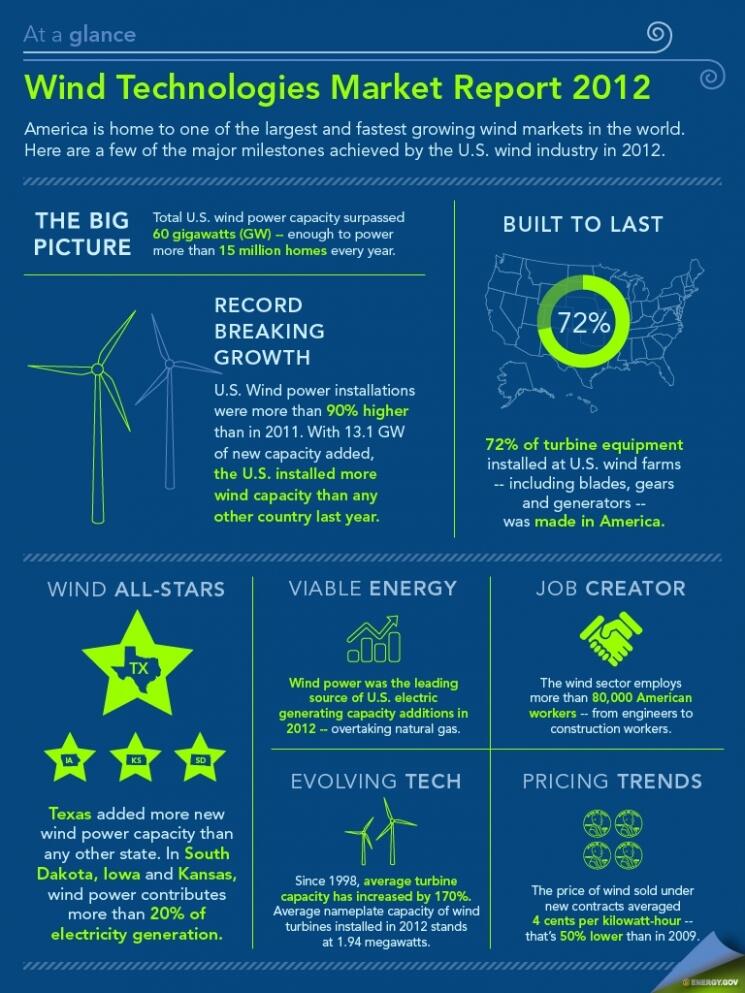 Wind Technologies Market Report 2012, from the U.S. Department of Energy

Generally good trends.  Chris Clarke and the Californians defending the deserts think windfarms are blots on the California deserts — and they’re right — but we can find lots of other places to put them in.

Texas showed greatest growth in windpower among the states.  South Dakota, Iowa and Kansas now get more than 20% of their electricity from wind generation.

Work needs to be done to make these bird-friendlier, especially friendlier to raptors. Solvable problems, I think. NOAA’s article on the State of the Climate released today:

2012 was one of the 10 warmest years on record globally

The 2012 State of the Climate report is available online.
(Credit: NOAA)

Worldwide, 2012 was among the 10 warmest years on record according to the 2012 State of the Climate report released online today by the American Meteorological Society (AMS). The peer-reviewed report, with scientists from NOAA’s National Climatic Data Center in Asheville, N.C., serving as lead editors, was compiled by 384 scientists from 52 countries (highlights, full report). It provides a detailed update on global climate indicators, notable weather events, and other data collected by environmental monitoring stations and instruments on land, sea, ice, and sky.

“Many of the events that made 2012 such an interesting year are part of the long-term trends we see in a changing and varying climate — carbon levels are climbing, sea levels are rising, Arctic sea ice is melting, and our planet as a whole is becoming a warmer place,” said Acting NOAA Administrator Kathryn D. Sullivan, Ph.D. “This annual report is well-researched, well-respected, and well-used; it is a superb example of the timely, actionable climate information that people need from NOAA to help prepare for extremes in our ever-changing environment.”

Conditions in the Arctic were a major story of 2012, with the region experiencing unprecedented change and breaking several records. Sea ice shrank to its smallest “summer minimum” extent since satellite records began 34 years ago. In addition, more than 97 percent of the Greenland ice sheet showed some form of melt during the summer, four times greater than the 1981–2010 average melt extent.

The 2012 State of the Climate report is peer-reviewed and published annually as a special supplement to the Bulletin of the American Meteorological Society. This year marks the 23rd edition of the report, which is part of the suite of climate services NOAA provides to government, the business sector, academia, and the public to support informed decision-making. The full report can be viewed online.

NOAA’s mission is to understand and predict changes in the Earth’s environment, from the depths of the ocean to the surface of the sun, and to conserve and manage our coastal and marine resources. Join us on Facebook, Twitter and our other social media channels.

It’s a big world.  A lot happens every day.

Over time, significantly historic events tend to pile up on every day of the year.  This is important to remember shortly after the ides of April when students — almost always male — start going on about Hitler’s birthday, Hitler’s suicide, and any other events that may fall on those days.  It’s good to remember coincidence plays a huge role in history, much more than those looking for woo connections will admit.

But I also like to celebrate important events.  Yesterday I posted on Damn the Torpedoes Day, the anniversary of the Battle of Mobile Bay and then-Capt. David Farragut’s famous line.

Doing that, and a dozen other things, I completely overlooked another anniversary that carries a lot of weight with me, and I hope with you, too.  I was reminded this morning when I saw the post from Professor Olsen @ Large, noting the day Mel Mermelstein beat the Holocaust deniers in court, and established in U.S. law the historical fact of the Holocaust.

On this date [August 5], Long Beach, California businessman Melvin Mermelstein struck a powerful blow against bogus history and historical hoaxes. Mel was awarded a judgment in a California court, in a contract case.

In 1980, the Institute for Historical Review (IHR), a Torrance, California organization that claimed that the planned extermination of Jews by the Nazis was a myth, had offered a $50,000 reward for anyone who could prove that the Holocaust actually happened.

Mermelstein’s lawyer, William John Cox, had a brilliant idea. He petitioned the court to take “judicial notice” of the fact of the Holocaust. The doctrine of judicial notice allows courts to recognize as fact something that is so well established that it doesn’t need to be evidenced when it is introduced in court — such as, 2 + 2 = 4, the freezing point of water is 32 degrees Fahrenheit and 0 degrees Celsius, the Earth orbits the Sun, etc.

In a pre-trial hearing on 9 October 1981, Los Angeles County Superior Court Judge Thomas T. Johnson resolved the most controversial part of the case; the court ruled that the Holocaust had occurred. The judge declared:

Under Evidence Code Section 452(h), this court does take judicial notice of the fact that Jews were gassed to death at the Auschwitz Concentration Camp in Poland during the summer of 1944.

It just simply is a fact that falls within the definition of Evidence Code Section 452(h). It is not reasonably subject to dispute. And it is capable of immediate and accurate determination by resort to sources of reasonably indisputable accuracy. It is simply a fact.

That ruling meant that, by operation of law, Mermelstein had won the case, obviating the need for a court trial.

Prof. Olsen has much more — go read — and I’ve listed my previous posts on Mel Mermelstein below.

There were two points of law in the case that delighted me.  One was the sweepstakes contract, and the other was the judicial note.  A sweepstakes contract is one where someone makes an offer, “the first one who does X, gets $,” for example.  While it’s a bit obscure, it is a point of contract law that sweepstakes contracts are enforceable in court (common law, as most contract law is).  Willis Carto‘s Holocaust denial group, the Institute for Historical Review (IHR), hadn’t realized that they made a bona fide, potentially legally-binding offer.  Mermelstein did, performed the required task, and demanded payment.  When IHR refused to pay, Mermelstein hauled them into court.

Judicial note is another oddity of law school, that I think is probably used way too seldom to squelch stupid lawsuits.  The rule — again in common law — is that a judge may take note of certain facts so they need not be evidenced and “proven” in court, over and over again.  The sky is blue, most of the time (black at night); boiling water is hot; 2+2=4 — those are the sorts of facts that judges may rule need not be evidenced at every trial where they might play a role.  Mermelstein’s lawyer, William John Cox — another hero, along with Lawrence E. Heller and all of Mermelstein’s lawyers — moved that the court take judicial note of the fact of the Holocaust.  The judge held a hearing, and did.

That meant there was no issue to take to trial in Mermelstein’s suit against IHR.  Where IHR had probably hoped for a chance to trot out their denialists claims, perhaps for broadcast and print media, the issue was now one solely for the judge to rule on the points of law — and on those points, Mermelstein won.  IHR had to pay him.

Plus, it was established in California, that the Holocaust did occur.  As a point of law, Holocause denialists are wrong.

August 5 should be Accurate History Day, too.

You could combine the lessons of history from David Farragut, Mel Mermelstein, and Davey Crockett, and get a good philosophy.  Davey Crockett said, be sure you’re right, then go ahead.

Get your history right, stand up for human rights, and damn the torpedoes!

I could live with that.

Tree of Testimony from victims of the Holocaust, at the Los Angeles Museum of the Holocaust; dozens of interviews of survivors were taped by researchers at the University of Southern California, displayed on these video screens.

In one of his demonstrations, the art comes from the ideas and sayings of Richard Feynman.

This guy makes money doing that? What kind of charmed life is that?

Just how fitting is it that Tufte uses the words of Feynman, probably more famous for Feynman diagrams than the work that got him a Nobel? “Picture of a Feynman diagram, inscribed by Richard P. Feynman to me [who MFB has not identified], in my copy of Volume 3 of his Feynman Lectures on Physics (Quantum Mechanics). Picture taken by self. if you can’t read the symbols, they are \gamma_\mu to \gamma_\mu and 1/q^2 .” Wikipedia image

Edward Tufte giving a class and holding a scanned copy of a first edition book by Galileo. Wikipedia image