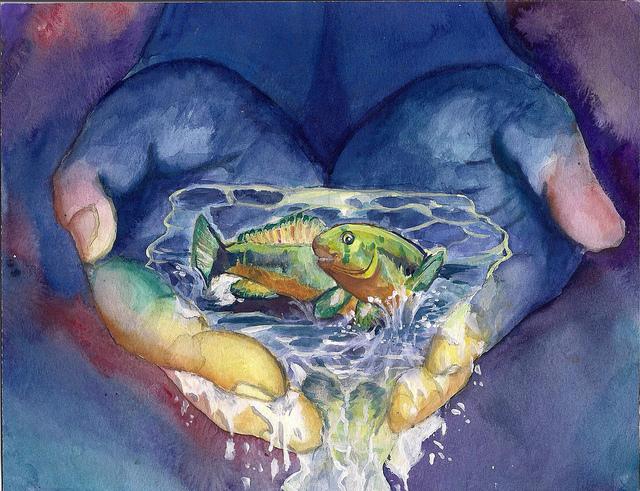 Maybe someone can make that 6th grader’s day, or life, by asking to purchase that piece (watercolor?) for a few thousands of dollars, to go into a college fund.

The USFWS blog, A Talk on the Wildside, announced the winners of the agency’s 2015 Saving Endangered Species Youth Art Contest.

David Starovoytov, a sixth-grader from California, won the Grand Prize with his art of a Kentucky arrow darter, a beautiful fish found only in eastern Kentucky. During the breeding season, the males are blue-green with scarlet spots and scarlet-orange vertical bars on their body.  The Kentucky arrow darter is a candidate for federal listing under the Endangered Species Act (ESA). Federal candidates warrant ESA protection but are sometimes precluded from listing by other higher priority listing actions (other species are more imperiled and take priority).  Each year, the Service publishes a list and summarizes the current status for all candidate species in its Candidate Notice of Review (CNOR). The CNOR helps landowners and natural resource managers plan conservation to address threats to candidate species. The Kentucky Department of Fish and Wildlife Resources has identified the Kentucky arrow darter as a species of greatest conservation need and has been hard at work conserving it through captive breeding and other projects.  A key threat to the Kentucky arrow darter is degradation of habitat through surface coal mining and other human activities.  Changes in water quality have a profound impact on all aquatic species, including the Kentucky arrow darter.

The darter itself has an interesting story. Cool that a California kid heard the story, and made such a nice work of art.

The rest of the press release, and other winners:

Fourteen-year-old Seungeun Yi, of California, took second place with art of an American alligator, actually one of our greatest ESA successes. As recently as the 1950s, American alligator populations were at all-time lows as market-hunting and habitat loss decimated the species. ESA protection prohibited hunting, and the alligator began to recover, and states throughout the South helped make sure the population increased. We declared the animal fully recovered in 1987, but related species are still in trouble, so the American alligator is listed as “threatened due to similarity of appearance.”

Another Californian, Mark Deaver, 8, won the Grades k-2 Category with his art of an endangered San Francisco garter snake. The San Francisco garter snake with its turquoise body and orange, black and red-orange stripes, is often called the most beautiful snake in the United States. Because they are so beautiful, some people collect them illegally. But the more significant threat comes from habitat loss. We are working with the California Department of Fish and Wildlife, the National Park Service, Golden Gate National Parks Conservancy, the California Department of Parks and Recreation and other partners to provide habitat for the snake.

Difei Li, 10, of New Jersey, won the Grades 3-5 Category with art of a bald eagle. Perhaps the ESA success story, the bald eagle population bottomed out in 1963 with just 417 nesting pairs in the contiguous United States. Habitat destruction and degradation, illegal shooting and the widespread use of DDT had sent the eagle population plummeting after World War II. Protecting habitat, banning most DDT use and a host of conservation actions by the American public helped bald eagles make a remarkable recovery. Though removed from the endangered species list in 2007 because their populations recovered sufficiently, bald eagles are protected under the Migratory Bird Treaty Act and the Bald and Golden Eagle Act.

Claire Noelle Kiernicki, 12, of  Illinois, won the Grades 6-8 Category with art of an endangered Northern aplomado falcon. Once widespread throughout the American Southwest, the aplomado falcon disappeared in South Texas in the 1940s and 1950s because of widespread loss of habitat.  An aggressive captive breeding and re-introduction effort has improved population numbers and the aplomado falcon is making a comeback in southern Texas.

Adam Pavan, 15, of California, won the Grades 9-12 Category with art of an endangered Hawaiian hoary bat. Also known as the ‘ope‘ape‘a, populations are believed to be threatened by habitat loss, pesticides, predation, and roost disturbance. Its decline may be primarily due to the reduction of tree cover in historic times, and they may be indirectly impacted by the use of pesticides. Conservation plans guide the management and use of forests to reduce negative efforts to known bat populations and, continued support for the ‘ope‘ape‘a research cooperative.

Congratulations to all the entrants and thank you for helping spread the word about the endangered species of  the United States and its waters.