A reminder, cartoonist winners of the 2016 United Nations/Ranan Lurie Political Cartoon Awards will be announced December 15, 2016.

Truth in cartoons. Boss Tweed complained that his voters couldn’t read the news stories, but they could see the “damned pictures.” On the run, Tweed was captured in Spain when someone recognized him from the images drawn by Thomas Nast.

Fighting corruption across the globe.

Here’s the second place winner in the UN/Lurie Awards for 2015, to Raimundo Rucke, drawing for O Dia, in Brazil.

What issues will dominate the 2016 contest, do you think?

World Malaria Report 2016, published December 13, offers great hope in progress made against malaria in the past 16 years.

But it also notes a severe challenge: Funding to beat malaria works well, but funding pledges sometimes are not met, and progress against the disease slowed some in 2016.

A child shows off the mosquito bednet that keeps him malaria-free. Image from Nothing But Nets.

WHO’s press release on the Report laid out the problem, with hints at a solution.

U.S. funding was just over $1 billion. That may sound like a lot, but it’s not even a drop in the U.S. federal budget bucket.

With a doubling of the U.S. contribution to $2 billion, the U.S. could again lead the world in fighting malaria, and set a good example of American democracy in action.

Then, U.S. would have high moral ground to urge other nations to contribute to fighting malaria, either directly through WHO or through non-governmental organizations whose work goes too-often unsung, such as Malaria No More, Nothing But ‘Nets, and the Clinton Foundation.

$10 buys a net and distribution, and a net protects a child from malaria better than spraying dangerous insecticides, for two to five years.

What are the odds the Trump administration could be recruited to beat malaria? Let’s increase those odds.

Here’s the first place winner in the UN/Lurie Awards for 2015. First place went to Cuban cartoonist, Aristides Hernandez Guerrero, for a cartoon in Courrier International: 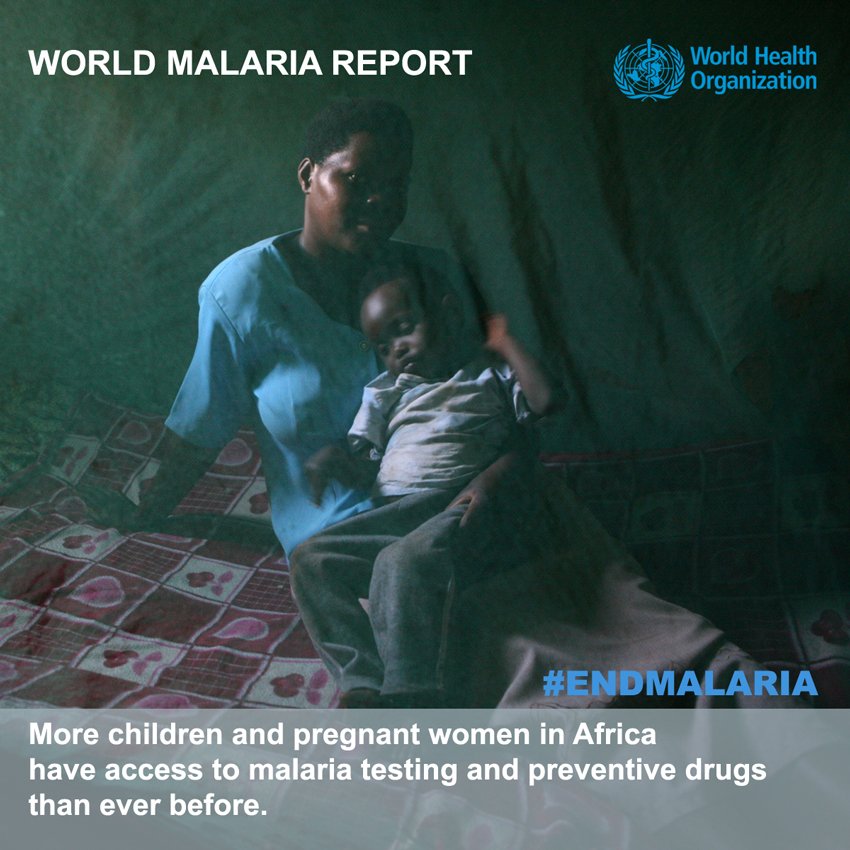 Promotional poster for the World Malaria Report 2016, from WHO; poster shows a woman and her child, protected from mosquitoes behind a bednet.

Incidence of malaria dropped to a new, all-time low in 2016, with reductions in total infections to 212 million, and a drop in malaria deaths to 429,000, worldwide. Malaria fighters had hoped the decreases would be greater.

Cover of World Malaria Report 2016, from the World Health Organization (WHO). The report has been published annually since at least 2008, tracking progress in the fight to control and eradicate malaria, one of the greatest scourge diseases in human history.

This news comes from the World Health Organization’s (WHO) World Malaria Report 2016, released this morning in Geneva, Switzerland.

Of concern to readers here, the report lists ten nations still using DDT, the same number as 2015. Nine African nations and India still find some utility in DDT, though resistance to the long-used pesticide is found in almost all populations of almost all varieties of mosquito.

India remains the world’s heaviest user of DDT and the only place DDT is manufactured. The nine DDT-using African nations are Botswana, Democratic Republic of Congo, Gambia, Mozambique, Namibia, South Africa, Swaziland, Zambia, and Zimbabwe. Due to mosquito and other vector insect resistance to DDT, India will stop using DDT by 2020, and stop manufacturing at the same time.

Insecticide-impregnated bednets now are the chief tool used to prevent spread of new malaria infections. Nets have proven more effective than Indoor Residual Spraying (IRS), which has always been the chief use of DDT in the malaria fight. The report notes that mosquito resistance grows alarmingly to the preferred net pesticides, pyrethroids. Nets provide a physical barrier to mosquitoes, however, and work even when the insecticides wear off.

This years report is shorter than previous years, but still loaded with statistics and policy issues to be unpacked in the next few days.

13 December 2016 | GENEVA – WHO’s World Malaria Report 2016 reveals that children and pregnant women in sub-Saharan Africa have greater access to effective malaria control. Across the region, a steep increase in diagnostic testing for children and preventive treatment for pregnant women has been reported over the last 5 years. Among all populations at risk of malaria, the use of insecticide-treated nets has expanded rapidly.

But in many countries in the region, substantial gaps in programme coverage remain. Funding shortfalls and fragile health systems are undermining overall progress, jeopardizing the attainment of global targets.

Sub-Saharan Africa carries a disproportionately high share of the global malaria burden. In 2015, the region was home to 90% of malaria cases and 92% of malaria deaths. Children under five years of age are particularly vulnerable, accounting for an estimated 70% of all malaria deaths.

Diagnostic testing enables health providers to rapidly detect malaria and prescribe life-saving treatment. New findings presented in the report show that, in 2015, approximately half (51%) of children with a fever seeking care at a public health facility in 22 African countries received a diagnostic test for malaria, compared to 29% in 2010.

To protect women in areas of moderate and high malaria transmission in Africa, WHO recommends “intermittent preventive treatment in pregnancy” (IPTp) with sulfadoxine-pyrimethamine. The treatment, administered at each scheduled antenatal care visit after the first trimester, can prevent maternal and infant mortality, anaemia, and the other adverse effects of malaria in pregnancy.

According to available data, there was a five-fold increase in the percentage of women receiving the recommended 3 or more doses of this preventive treatment in 20 African countries. Coverage reached 31% in 2015, up from 6% in 2010.

Insecticide-treated nets are the cornerstone of malaria prevention efforts in Africa. The report found that more than half (53%) of the population at risk in sub-Saharan Africa slept under a treated net in 2015, compared to 30% in 2010.

Last month, WHO released the findings of a major 5-year evaluation in 5 countries. The study showed that people who slept under long-lasting insecticidal nets (LLINs) had significantly lower rates of malaria infection than those who did not use a net, even though mosquitoes showed resistance to pyrethroids (the only insecticide class used in LLINs) in all of these areas.

Malaria remains an acute public health problem, particularly in sub-Saharan Africa. According to the report, there were 212 million new cases of malaria and 429 000 deaths worldwide in 2015.

There are still substantial gaps in the coverage of core malaria control tools. In 2015, an estimated 43% of the population in sub-Saharan Africa was not protected by treated nets or indoor spraying with insecticides, the primary methods of malaria vector control.

In many countries, health systems are under-resourced and poorly accessible to those most at risk of malaria. In 2015, a large proportion (36%) of children with a fever were not taken to a health facility for care in 23 African countries.

“We are definitely seeing progress,” notes Dr. Pedro Alonso, Director of the WHO Global Malaria Programme. “But the world is still struggling to achieve the high levels of programme coverage that are needed to beat this disease.”

At the 2015 World Health Assembly, Member States adopted the Global Technical Strategy for Malaria 2016-2030. The Strategy set ambitious targets for 2030 with milestones every 5 years to track progress.

Eliminating malaria in at least 10 countries is a milestone for 2020. The report shows that prospects for reaching this target are bright: In 2015, 10 countries and territories reported fewer than 150 indigenous cases of malaria, and a further 9 countries reported between 150 and 1000 cases.

Countries that have achieved at least 3 consecutive years of zero indigenous cases of malaria are eligible to apply for the WHO certification of malaria elimination. In recent months, the WHO Director-General certified that Kyrgyzstan and Sri Lanka had eliminated malaria.

But progress towards other key targets must be accelerated. The Strategy calls for a 40% reduction in malaria case incidence by the year 2020, compared to a 2015 baseline. According to the report, less than half (40) of the 91 countries and territories with malaria are on track to achieve this milestone. Progress has been particularly slow in countries with a high malaria burden.

An urgent need for more funding

If global targets are to be met, funding from both domestic and international sources must increase substantially.

Last month, WHO announced that the world’s first malaria vaccine would be rolled out through pilot projects in 3 countries in sub-Saharan Africa. Vaccinations will begin 2018. The vaccine, known as RTS,S, acts against P. falciparum, the most deadly malaria parasite globally, and the most prevalent in Africa. Advanced clinical trials have shown RTS,S to provide partial protection against malaria in young children.

WHO multi-country evaluation on LLINs

On 16 November 2016, WHO released the findings of a 5-year evaluation conducted in 340 locations across 5 countries: Benin, Cameroon, India, Kenya and Sudan. The findings of this study reaffirm the WHO recommendation of universal LLIN coverage for all populations at risk of malaria.

Will major media cover this news? Will your local newspapers and broadcast outlets even make note?