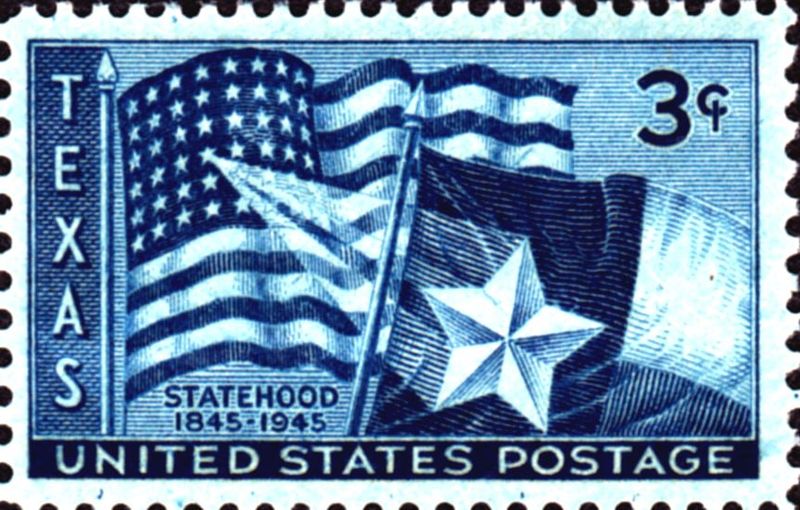 Congress approved Texas’s petition to join the union on December 29, 1845. Texas joined the United States of America 171 years ago today.

On December 29, 1845—171 years ago today—the U.S. Congress voted to annex Texas, eight years after statehood was first proposed. In June 1845 the Texas Congress voted in favor of annexation and on July 4, 1845, a convention of elected delegates followed suit. A popular vote in October ratified the document, which the U.S. Congress accepted on December 29, 1845, making Texas the 28th state. Texas President Anson Jones handed over control of the new state government to Gov. James Pinckney Henderson on February 19, 1846.

Engraving of Texas President Anson Jones lowering the flag of the Republic of Texas, to be replaced with the flag of the United States, on December 29, 1845, after Congress accepted the annexation of Texas into the Union. Texas State Library image.

The former Republic of Texas joined the United States of America as the 28th state. pic.twitter.com/hEnqDqbU4E

This entry was posted on Thursday, December 29th, 2016 at 12:45 pm and is filed under 1845, Flag etiquette, Fly your flag today, History, Statehood, Texas. You can follow any responses to this entry through the RSS 2.0 feed. You can leave a response, or trackback from your own site.

One Response to Texans fly U.S. flags today in honor of Texas statehood