May 11 is Feynman Day! How to celebrate? (It’s his centenary!)

Most Feynman fans are celebrating through the entire year — appropriately, for a man so much larger than life and unable to be constrained after death.

We should mark the actual day, I think. It would be a good thing to celebrate science on May 11 in his honor, I think. And, there are lots of other good ways to commemorate a great guy.

I think sometimes that Feynman’s calm alone, borne of that great good humor and insatiable curiosity, may have gotten us through the birth of the Atomic Age and the Cold War. 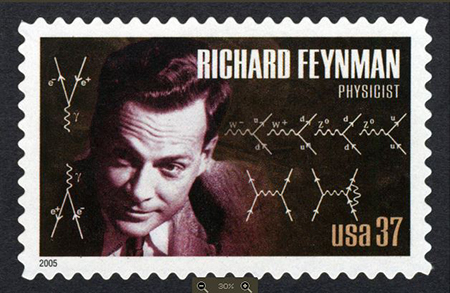 Feynman was featured in print and broadcast ads for Apple — not one, but two (did anyone else get that honor from Apple?). “Think Different.” This is one of Apple Computer’s most successful advertising campaigns. The theme of the campaign is one that celebrates figures in history who changed the world by thinking differently. Richard Feynman was among the chosen figures. Image from the Feynman Group.

Feynman served on the board that approved science books for the California school system –– his stories of that work will shock some, but it will make others shake their heads as they recognize the current crop of cargo-cultists and political bullies who dominate textbook approval processes, knowing nothing at all about what they are doing, or why.

The sages say we shouldn’t have regrets, but I do have one. When the Challenger Commission was meeting in Washington, D.C., I was working on another commission up the street. I knew Feynman was ill, but our work was important, and we’d heard his disease was in remission. I didn’t goof off a day and go to any of the hearings to see him, to get an autograph, to meet the man. I thought I’d have other opportunities to do that. Now I regret not having met him in person.

In print, and in film, I know him well. In our family, reading Feynman is something everybody does. Feynman’s memoir was one of the last books I read to our son, Kenny, as he was growing up, and growing into reading on his own. Even reading about Feynman, together, was an adventure. Our son, James, took us into the real physics of Feynman, and though I struggle with it more than James, we still read Feynman, for humor, and physics.

What would be appropriate ways to mark Feynman’s birth? At some future date, I hope we’ll have public readings of his books, showings of the documentaries about him, recreations of his lectures, perhaps. And then everyone can get in a circle, beating drums and singing about getting some orange juice, before sending postcards to our friends in Tuva.

This entry was posted on Tuesday, May 8th, 2018 at 1:56 pm and is filed under Biography, Books, Feynman, History, Humor, Life, Physics, Science. You can follow any responses to this entry through the RSS 2.0 feed. You can leave a response, or trackback from your own site.

4 Responses to May 11 is Feynman Day! How to celebrate? (It’s his centenary!)