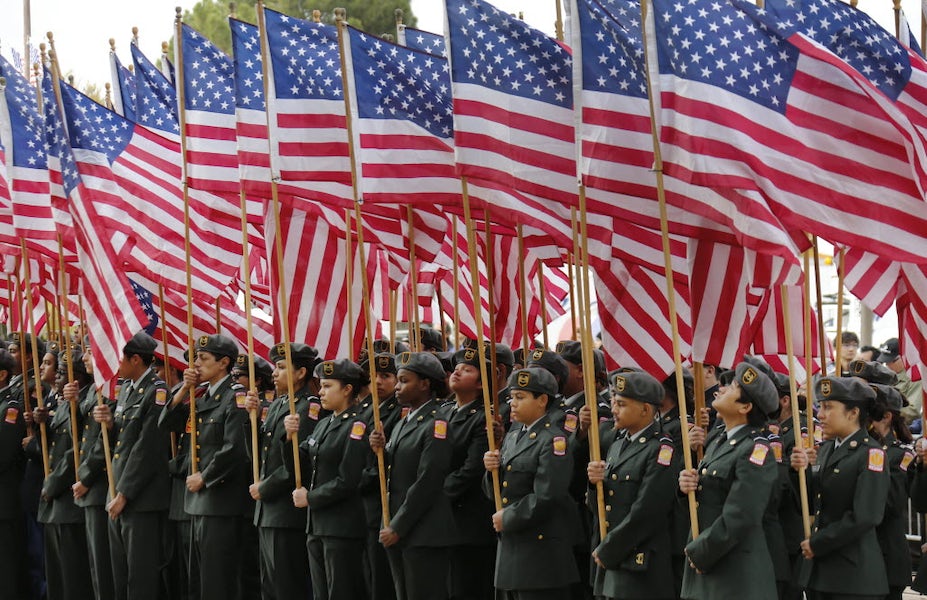 From Dallas GuideLive: Dallas area ROTC squads hold dozens of American flags in formation as they kick off the festivities on Veterans Day in 2014. Louis DeLuca/Staff Photographer

Two official answers, and a pragmatic one:

1. The U.S. Flag Code specifies “Veterans Day,” which grew from Armistice Day, which is November 11, marking the day of the armistice that ended fighting in World War I. So the law specifies November 11. (There is no enforcement clause in that law, by the way — no flag police will check your neighborhood.)

2. President Trump’s proclamation for Veterans Day specifies November 11 (see below). Presidents may issue proclamations on any of the dates listed in law, or on other dates as they desire. (No flag police there, either.)

On November 11, 1918, the United States and its allies signed an armistice with Germany to end hostilities in World War I.  The Great War exacted a tremendous toll on our Nation.  More than 100,000 American service members perished in the war, and the lives of countless others were forever altered.  In 1919, to honor and memorialize these sacrifices, President Woodrow Wilson proclaimed November 11 as Armistice Day, the precursor to Veterans Day, expressing “solemn pride in the heroism of those who died in the country’s service.”  This year, as we commemorate the 100th anniversary of the Armistice, we again salute the generations upon generations of American heroes who have sacrificed so much to secure the blessings of freedom for their fellow Americans.

We will never be able to repay the debt we owe the brave men and women who have served in the Army, Navy, Air Force, Marines, and Coast Guard.  To the 20 million veterans alive today:  this Veterans Day, we recommit ourselves to providing you with the care you deserve.  In June, I signed into law the VA MISSION Act of 2018, enacting some of the most substantial reforms to the Department of Veterans Affairs (VA) in a generation.  This landmark legislation made Veterans Choice permanent, ensuring that our Nation’s veterans have timely access to the highest quality of care possible and the flexibility to receive care either at the VA or at a private healthcare facility.  The VA MISSION Act is removing barriers to telemedicine and expanding access to walk-in clinics.  And it is giving veterans who were catastrophically injured in World War II, the Korean War, the Vietnam War, and the Gulf War the same access to caregiver assistance that veterans of more recent conflicts already enjoy.  My Administration is also processing veteran claims and appeals more quickly than ever before, and veterans can now use their GI Bill benefits at any point in their lives.  And, for the first time in history, the Department of Defense and the VA will share electronic health records, improving accessibility and easing the healthcare burden on our veterans.

For many service members, the transition into civilian life can be fraught with challenges.  To enhance their access to critical resources and support, I signed an Executive Order that directs the Secretaries of Defense, Veterans Affairs, and Homeland Security to develop and implement a Joint Action Plan that provides seamless access to mental health treatment and suicide prevention resources for service members in the year following the conclusion of their military service.

As we mark the centennial of the Armistice, we remember the countless sacrifices that our country’s heroic veterans have made throughout our history to preserve our liberty and prosperity.  Our veterans embody the values and ideals of America and the timeless virtue of serving a greater cause.  With respect for, and in recognition of, the contributions our service members have made to the advance of peace and freedom around the world, the Congress has provided (5 U.S.C. 6103(a)) that November 11 of each year shall be set aside as a legal public holiday to honor our Nation’s veterans.  As Commander in Chief of our heroic Armed Forces, I humbly thank our veterans and their families for their selflessness and love of country as we remember their service and their sacrifice.  Today, and every day, we pay tribute to those who have worn the uniform, and we pray for the safety of all currently serving in harm’s way.

NOW, THEREFORE, I, DONALD J. TRUMP, President of the United States of America, do hereby proclaim November 11, 2018, as Veterans Day.  I encourage all Americans to recognize the fortitude and sacrifice of our veterans through public ceremonies and private thoughts and prayers.  I call upon Federal, State, and local officials to display the flag of the United States and to participate in patriotic activities in their communities.  I call on all Americans, including civic and fraternal organizations, places of worship, schools, and communities to support this day with commemorative expressions and programs.

IN WITNESS WHEREOF, I have hereunto set my hand this ninth day of November, in the year of our Lord two thousand eighteen, and of the Independence of the United States of America the two hundred and forty-third. 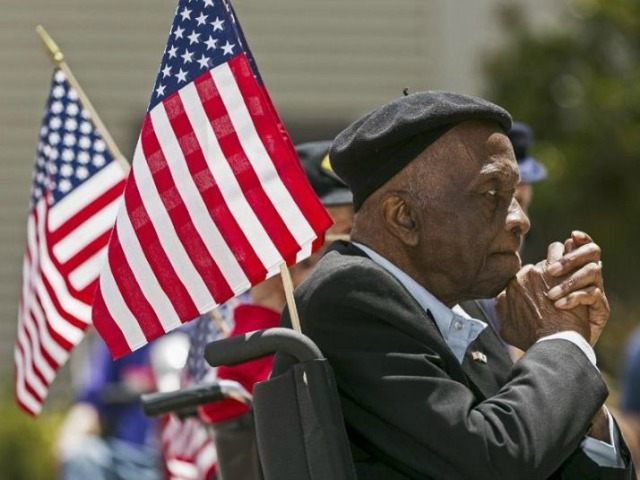 We fly our flags today, November 11, to honor all veterans, an extension and morphing of Armistice Day, which marked the end of World War I. The Armistice took effect on the November 11, 1918.

(In 2018, many commemorations have been moved to Monday, November 12; feel free to fly the flag both days.)

Another very nice Veterans Day poster from the Veterans Administration, for 2018: 2018’s Veterans Day from the Veterans Administration features the poppy symbolic of World War I, contrasted with barbed wire from the battlefields.