Typewriter of the moment: Nelly Sachs

Typewriter of Nelly Sachs. It’s a Mercedes, if I have identified it correctly.

She fled Nazi Germany for Sweden in 1940. In Sweden, she adapted to a new culture. Then she wrote about the experiences of flight, and adaptation.

In 1966 the Nobel organization awarded the Nobel Prize for Literature to Nelly Sachs. Sachs was born December 10, 1891. Google’s Doodle honored her on December 10, 2018, with a short video and image of her typewriter. The animation shows Sachs’ typewriter in a suitcase, an homage

Nelly Sachs was born on 10 December 1891 in Berlin. In 1940 Nelly fled with her aged mother to Sweden. Nelly Sachs and her mother escaped on the last flight.

Her best-known play is: … “Eli – Ein Mysterienspiel vom Leiden Israels” (1950) 1957 she got the Nobel Prize in Literature. Sachs’ poetry is intensely lyrical and reflects some influence by German Romanticism. Happy birthday Nelly Sachs.

Music: “Trio for Piano Violin and Viola” by Kevin MacLeod

Google shows 3 sketches of the doodle.

Nelly Sachs Biography (Wikipedia): Born Leonie Sachs in Berlin-Schöneberg, Germany, in 1891 to the wealthy natural rubber and gutta-percha manufacturer Georg William Sachs (1858–1930) and his wife Margarete, née Karger (1871–1950),[1] she was educated at home because of frail health. She showed early signs of talent as a dancer, but her protective parents did not encourage her to pursue a profession. She grew up as a very sheltered, introverted young woman and never married. She pursued an extensive correspondence with, and was friends with, Selma Lagerlöf and Hilde Domin. As the Nazis took power, she became increasingly terrified, at one point losing the ability to speak, as she would remember in verse: “When the great terror came/I fell dumb.” Sachs fled with her aged mother to Sweden in 1940. It was her friendship with Lagerlöf that saved their lives: shortly before her own death Lagerlöf intervened with the Swedish royal family to secure their release from Germany. Sachs and her mother escaped on the last flight from Nazi Germany to Sweden, a week before Sachs was scheduled to report to a concentration camp. They settled in Sweden and Sachs became a Swedish citizen in 1952.

Living in a tiny two-room apartment in Stockholm, Sachs cared alone for her mother for many years, and supported their existence by translations between Swedish and German. After her mother’s death, Sachs suffered several nervous breakdowns characterized by hallucinations, paranoia, and delusions of persecution by Nazis, and she spent a number of years in a mental institution. She continued to write even while hospitalized. She eventually recovered sufficiently to live on her own, though her mental health would always be fragile. Her worst breakdown was ostensibly precipitated by hearing German speech during a trip to Switzerland to accept a literary prize. However, she maintained a forgiving attitude toward a younger generation of Germans, and corresponded with many German-speaking writers of the postwar period, including Hans Magnus Enzensberger and Ingeborg Bachmann. Source: https://en.wikipedia.org/wiki/Nelly_S… 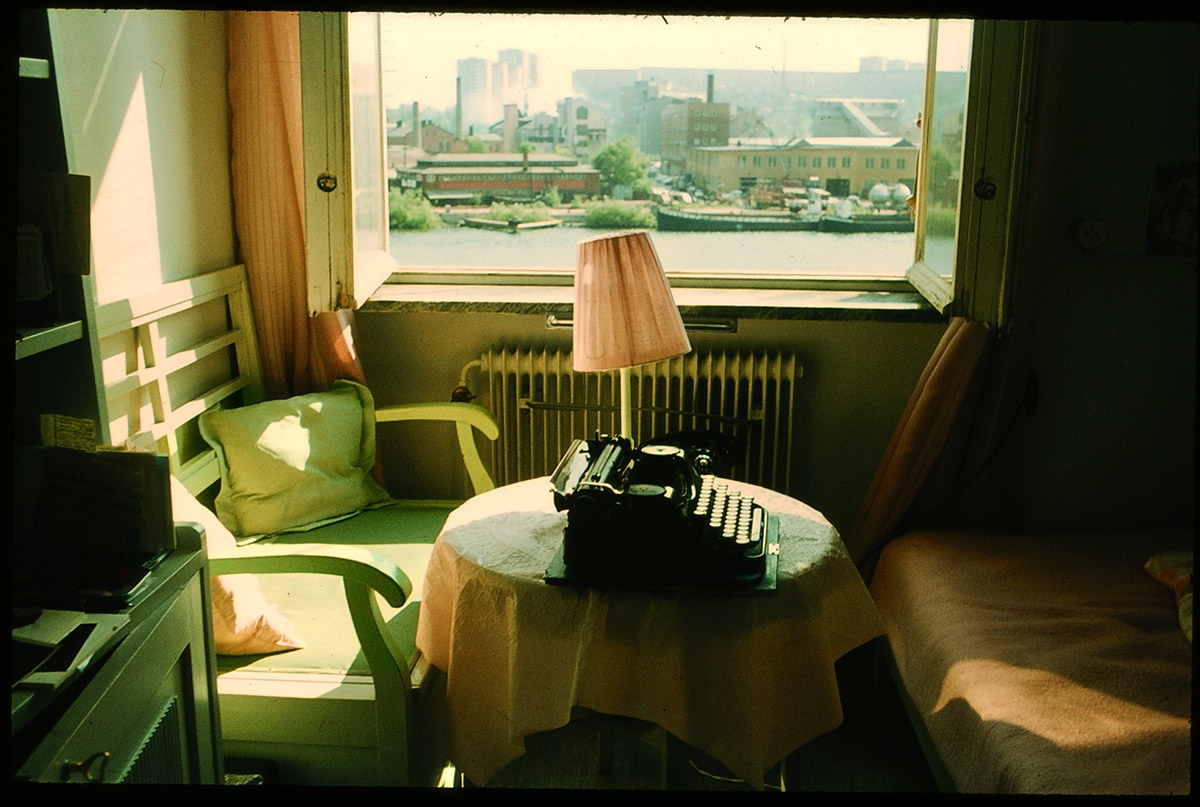 Apartment of Nelly Sachs, with her typewriter, in Stockholm, Sweden. Gewerk.com image.

This entry was posted on Monday, December 10th, 2018 at 10:02 am and is filed under Books, History, Literature, Nobel Prizes, Poetry. You can follow any responses to this entry through the RSS 2.0 feed. You can leave a response, or trackback from your own site.