A golden pen used by President Grover Cleveland to sign the law setting conditions for statehood in 1894; Utah met the conditions, and Cleveland signed the proclamation of statehood just over a year later, on January 4, 1896. Sources of the photograph do not say who has the pen now, nor where it might be displayed. ILoveHistory.com image

Flying the U.S. flag is a big deal in Utah. Most families have at least one flag to fly on holidays. But in my decades in the state, I don’t think I saw anyone fly the flag for Utah Statehood day.

Utah’s public officials take their oaths of office on January 4, traditionally. In the past couple of decades, a ball for statehood, a Statehood Dance, is scheduled on a Saturday close to January 4, in the museum in Fillmore, Utah, which once was the territorial capitol building before the capital was moved to Salt Lake City. 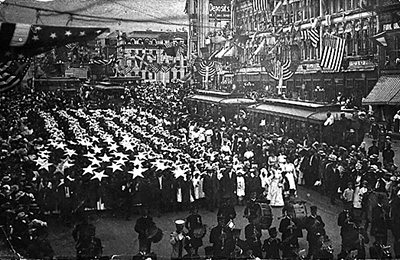 Marchers carrying stars and colored material to make stripes for a flag in a statehood parade in Salt Lake City, 1910. Photo from the University of Utah Marriott Library.

Rare 1900 campaign flag featuring portraits of President William McKinley and Vice President nominee Theodore Roosevelt. Such a display is contrary to the U.S. Flag Code today, but in 1900 there was no flag code, and not really much solid regulation on U.S. flags. Bonsell/Americana image.

This entry was posted on Friday, January 4th, 2019 at 4:42 am and is filed under Flag etiquette, Fly your flag today, History, Statehood, Utah. You can follow any responses to this entry through the RSS 2.0 feed. You can leave a response, or trackback from your own site.