Devils Tower is beautiful in autumn

Or any other time of year. 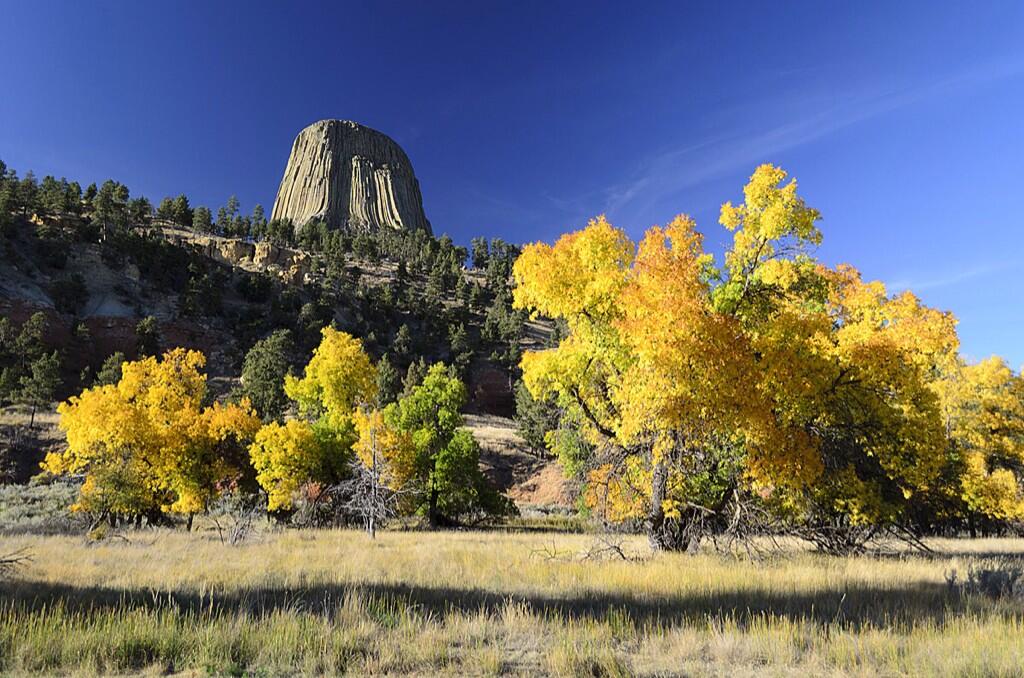 US Dept of Interior ‏@Interior 16h Is there any doubt fall is best enjoyed in America’s great outdoors? Here’s great example from Devils Tower NM. pic.twitter.com/YRo1U8DSMQ

What do you think Richard Dreyfus thinks when he sees that?  Stephen Spielberg?

And looking even closer, you spy Richard Dreyfus never-wanna-bes:

Climbers on Devils Tower. Photographer Nancy Littlefield said: “There were Native American prayer bundles along the trail around the base. It really is awe inspiring. Early morning gives you the best light to photograph it by.”

Devils Tower is the plug of an old volcano.  What’s left is the magma that hardened, and what we see is left after the softer cone eroded away.

Utah’s canyons have so many pretty spots. Taking visitors through them I always heard about how no one expected such beauty in the desert. So I was excited to see the headline in Sunday’s Dallas Morning News about taking the Alpine Loop. Prettiest drive you can make in a day. Start out in American Fork, head up American Fork Canyon, cross over to the backside of Mt. Timpanogos — you’ll see aspen, pines, fir, some of the prettiest streams you’ve ever seen anywhere. Some years back the Utah Travel Council had a spectacular poster showing the colors in the fall — about five shades each of red, gold and green, aspen and cottonwoods against the balsam and Douglas fir and a few scattered pines. Stop and hike up to Timpanogos Cave National Monument. See where the glacier was on the east side of Timpanogos.

End up passing Robert Redford’s Sundance Ski Resort, and down Provo Canyon (when I skied there it was $6.50 for a full-day pass; have the rates gone up?) — finish up with dinner in a good restaurant in Provo (or drive the 36 miles back to Salt Lake City and have world-class sushi at Takashi).

Alas. The article was about Colorado’s Alpine Loop. Who knew Colorado even had one by that name?

I suspect the Colorado version is less-traveled. The author took a four-wheel-drive vehicle.

Utah Travel Council photo of the Alpine Loop showing some of the autumn colors -- not the great shot from the long-ago poster, alas.

Utah’s Alpine loop is paved the entire way, closed maybe only during a winter of very heavy snow. If you’re just passing through, you can do the drive in three hours or less, easily. If you have a day, grab a picnic, and spend some time stopping to enjoy the mountains.

(Go see Rich Legg’s photos of the east side of Timpanogos, here.)

You know the old saying about “take time to stop and smell the balsam, and ooh and aah at the aspen?” The Alpine Loop is what the aphorist was thinking about. Theodore Roosevelt would have gone there, had he known about it. You know about it now.