Image of the moment: San Francisco de Asis without Adams or O’Keefe

Neither Ansel Adams nor Georgia O’Keefe noted the power lines, or the gas meter.

They must be recent additions.

The essential beauty of the church remains. 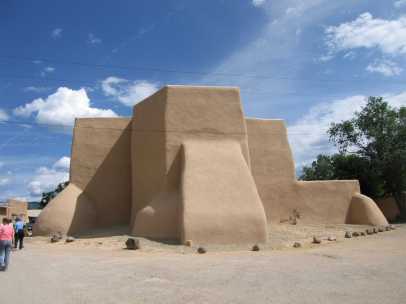 The original adobe construction of the church was completed in 1772 — four years prior to the Declaration of Independence. It is built in the shape of a cross, but structural weaknesses required the addition of buttresses, shown in the photograph — also of adobe.

A bad photograph of the church is almost impossible.

The interior is cool on a hot afternoon. Adobe construction offers significant advantages, even in the 21st century. The church hosts an active congregation, without air conditioning.

Photo: Copyright 2007, Ed Darrell; you may reproduce for educational or non-profit use, so long as attribution is attached. Attribution must be attached.

Welcome, visitors!  Please leave a comment, at least tell why you visited, and where you’re from.  Thank you.

If you care about such things and have been paying attention here, you may have noted that I do not often post material from my electronic camera. The reason is simple: I’m stuck in the film age.

We have four single-lens reflex cameras, and a couple of other 35mm film-using cameras that served us well for the past 30 years or so. We have some wonderful images, and lots of snapshots. An early experience with electronic images suggested the color might not be as good in purely electronic images, and of course, the detail . . .

Well, I borrowed son Kenny’s Canon PowerShot S70 for the current trip to New Mexico, and I think the results are spectacular. In only one category have I found a flaw: Extreme telephotography.

My thought is that teachers should get a good digital camera for use in creating images for classroom and internet use. No, not the clunky things most schools had that I’ve seen in the past four years — a good Canon or Nikon, or Sony or Fuji or Panasonic, or Kodak. Budget to update every two years or so for the school (the camera I’m shooting with is more than two years old, though).

There’s just no substitute for good images in teaching.

Photo taken 12 hours ago, on July 5, 2007, of student James Darrell applying lessons in building with adobe, in an adobe house under construction in Taos, New Mexico.  Photo taken while photographer was balanced precariously atop a ladder and holding concrete forms.  Copyright 2007, Ed Darrell