Quote of the moment: Rachel Carson on DDT fish kills

Cover of 1971 EPA publication, Fish Kills Caused By Pollution in 1971. According to the publication, in Texas, in 1971, 16 million fish died in just 6 pollution-caused incidents. (page 9 of the report).

One of the most spectacular fish kills of recent years occurred in the Colorado River below Austin, Texas, in 1961. Shortly after daylight on Sunday morning, January 15, dead fish appeared in the new Town Lake in Austin and in the river for a distance of about 5 miles below the lake. None had been seen the day before. On Monday there were reports of dead fish 50 miles downstream. . . . By January 21, fish were being killed 100 miles downstream. . . . During the last week of January the locks on the Intracoastal Waterway were closed to exclude the toxic waters from Matagorda Bay and divert them into the Gulf of Mexico.

. . . investigators in Austin noticed an odor associated with the insecticides. . . The manager of the (chemical) plant admitted that quantities of powdered insecticide had been washed into the storm sewer recently and, more significantly, he acknowledged that such disposal of insecticide spillage and residues had been common practice for the past 10 years.

. . . For 140 miles downstream from the lake the kill of fish must have been almost complete, for when seines were used later in an effort to discover whether any fish had escaped they came up empty. Dead fish of 27 species were observed, totaling about 1000 pounds to a mile of riverbank.

Cribbed from the US Geological Survey site.

Nutshell: The case against the critics of Rachel Carson

Mothers who read Rachel Carson’s book asked supermarkets to stop carrying produce or other products laced with DDT, as a precaution against damage to their children. It’s appropriate that a mom’s blog would make the case against Carson’s critics so succinctly, so go read it.

Another reason why DDT use damages mosquito control: Bats 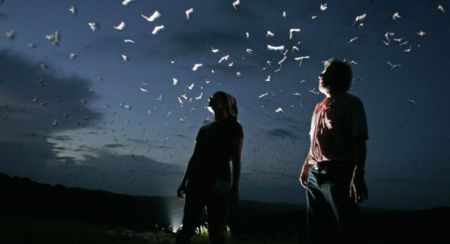 It’s easy to understand. Look at the on-line Dictionary.com definition of the Mexican free-tailed bat, for example:

Was that difficult? It’s right there in the definition of the animal: DDT kills bats.

Bats eat mosquitoes, those things that carry malaria and other diseases. A Mexican free-tailed bat eats about 70% of its body weight in mosquitoes, every night.

This morning’s Dallas Morning News has a front page story, with great photo, on the value of bats in Texas, “Taking bats to the bank.”

Researchers have long known that bats in Texas caves dine on insect pests. But just how many bats there are and the value of their feeding had proved elusive until a five-year, $2.4 million National Science Foundation study by scientists from Boston University, the University of Tennessee, the U.S. Department of Agriculture and Texas Parks and Wildlife.

From sundown to sunup, the freetail bats consume a staggering 400 metric tons of insects a year in the Winter Garden, or 2 million pounds each night. They range over a radius of 75 miles and feed from ground level to 10,000 feet.

The bats help save $1.7 million annually by preventing crop damage and additional pesticide use in the eight-county Winter Garden, which produces $6 million in cotton each year, according to the report by the Boston University team.

“Most people think of bats as ugly or vile, but there is a real value they provide humankind,” said principal investigator Tom Kunz of Boston University. “The bats are a literal shield for this crop region. But until this project, no one developed a means to measure the specific economic value of bats to agriculture.”

From my experience with agriculture, that $1.7 million figure looks low, way low. Scientific studies like this tend to be very conservative, though, so we can say with great confidence that this is a floor figure.

DDT kills bats, and those bats who don’t die from eating DDT-laced insects often provide meals for predator birds, who then get a greater dose of the next-generation-killing chemical.

Studies have shown that the pesticide DDT often used by farmers in the 1950s and 1960s may also have led to the depletion of large numbers of Mexican free-tailed bats (Clark).The Carlsbad Caverns colony decreased steadily in size from nearly 20 million down to only a couple hundred thousand during the 1960s due to DDT use (Wilson 110).A study in 1974 documented levels of the toxin in fat stores the bats would accumulate before migration, and found that when those fat stores were metabolized during the long flight, DDT levels were high enough to kill many of the bats (Wilson 110).In addition, DDT ingested by mother bats was passed along to their young causing most of them to die before reaching maturity (Wilson 110).Clark’s follow up study in 2001 also showed levels of DDT in bat specimens from the 1950s and 1960s to be considerably higher than in specimens from later decades (Clark).These kinds of toxin levels would account for the dramatic decrease in the Carlsbad bat population.

All of this adds up to a conclusion that critics of Rachel Carson who make the wild claims that DDT is harmless, and that but for DDT mosquito control would have been achieved, and therefore malaria would be wiped out do not have a clue what they are talking about, and probably have some skullduggery in mind when they go after Rachel Carson. Ironically, overuse of DDT actually benefits mosquitoes in the U.S., killing the predators of mosquitoes and other crop and human pests, allowing the mosquitoes to breed and feed uninhibited.

In her book Silent Spring, Rachel Carson had noted a pesticide spill in Austin, Texas, which occurred in 1961 and virtually cleaned out all the fish in the Colorado River downstream — fish, of course, prey on mosquito larvae. DDT use in Texas, therefore, hammers mosquito abatement possibilities at both ends. END_OF_DOCUMENT_TOKEN_TO_BE_REPLACED

Whom the gods destroy, they first make mad

Vox Day writes a column at the abominable WorldNet Daily. Also he blogs.  Frequently he demonstrates the flight of reason from those pages, such as his column on July 7, in which he wrote:

What is interesting is observable evidence shows that even professional evolutionary biologists are increasingly frightened to expose themselves to the ridicule that the softness of their science renders them liable. Consider this recent post at the science blog Pharyngula by Dr. P.Z. Myers, a biologist and associate professor at the University of Minnesota, Morris, entitled Don’t Debate Creationists.

Why does that demonstrate Day’s flight from reason?  Here, let me explain.

First, Day establishes as his premise that real biologists, scientists who practice in the real world and actually understand Darwin and evolution, are “afraid to expose themselves to the ridicule that the softness of their science renders them liable.”  In short, he’s saying they don’t talk to the public.

His evidence?  He cites a blog post by P. Z. Myers, an evolutionary development biologist at the University of Minnesota, Morris, a co-founder of and frequent contributor to the evolution-promoting weblog Panda’s Thumb, and the creator and author of the science weblog Pharyngula.

So, what Day is saying is that Myers doesn’t bother to expose himself to public scrutiny despite Myers’ being a distinguished researcher and teacher who daily exposes himself to tens of thousands of readers on two of the most heavily trafficked blogs in the world — generally, many times each day — in addition to his work exposing himself to other scientists via his research publications, and through his teaching several classes.

Right.  And preachers never speak, Pope Benedict is not Catholic, and polar bears don’t defecate on the ice or in the water.  Nor is the sky blue.

Of such evidence are most rants at WorldNet Daily made.

. . . Ken Ham’s creationist museum is established. An amateur geologist/paleontologist in Cincinnati lets the rocks tell their own story. Interestingly, the story they cry out is not the one promoted by Ken Ham.

Tip of the old scrub brush to Panda’s Thumb and P. Z. Myers.