There’s a fun blog, Tugster: A Waterblog, that usually features photos of tugs that ply the waters around New York City. Good to wonderful photos; and I’ve been hoping for a reason to mention the blog.

Here’s one: What do you see peeking through the trees and wires? 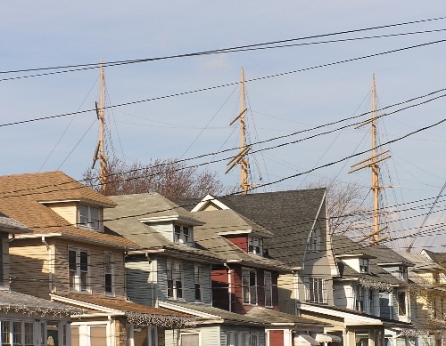 It’s the masts of the barque Peking, a sailing ship built for a German shipping company in 1911 — the same year the Titanic was built. This was a freight hauler, used originally to take nitrates mined in South America to Europe.

After a relatively long sailing career, the ship has been retired as a museum ship at the South Street Seaport Museum (a great place to visit when you get to New York). It’s in dry dock right now, which is where these photos were taken. 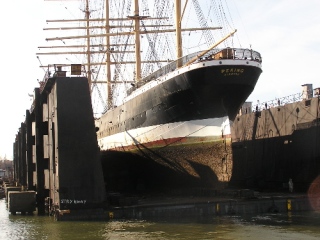 Tugster points to a lot of details, with several photos. It’s interesting to see a ship of the vintage of the Titanic, out of water. It’s interesting to see one of the faster sailing ships, especially one built for use in the 20th century. You can see how the technology of ships and shipbuilding allowed for faster sail vessels; this is part of the story of how technologies get eclipsed, too — when sailing could no longer keep up with steam, advances in sailing ships slowed to a stop.

This was one of the last, fast sailing vessels built — one of a chain of “flying P-liners.”

Get on over to Tugster and see what you can do with the photos, and the history.

This entry was posted on Saturday, January 12th, 2008 at 11:03 pm and is filed under Capturing history, Geography - Economic, History, Museums, Technology, Transportation, Travel, World War I. You can follow any responses to this entry through the RSS 2.0 feed. You can leave a response, or trackback from your own site.