The Fort Worth Star Telegram lists five sites for Texans vacationing close to home to visit, to promote their knowledge of local history.

Of course, out-of-towners might want to see the sights, too:

Texas history teachers might want to note these sites — field trips! Extra credit! (The entire article is preserved below the fold, in the event of the folding of McClatchy Newspapers, or the paper’s deleting the story from their archives.)

END_OF_DOCUMENT_TOKEN_TO_BE_REPLACED

From This Isn’t Happiness: A photograph captioned only “Spraying DDT / Santa Monica, 1940s”: 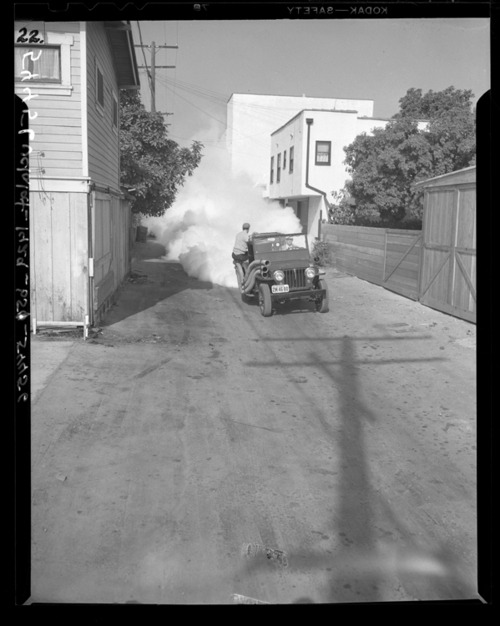 Music about America, for the road, for the classroom

NPR’s series, “Road Trip: Songs to Drive By,” featured five classical and jazz tunes about specific places in the U.S., some from larger works, in the June 10 program. Each of these works should be featured in U.S. history classes, at least. They represent music forms and tunes students should be familiar with.

How can you use this music in your classes?

Programming and descriptions below from Naomi Lewin at WGUC – Cincinnati. Go to the NPR site of the program to listen to the music she notes, or to purchase the music. Perhaps your library or media center would have some of this music available?

At this time of year, you have to get up around 4 a.m. to experience the full effect of sunrise over the Grand Canyon. When Ferde Grofé saw it as a young musician on the road, he was so bowled over that he sat down and wrote “Sunrise,” the first movement of what turned into his “Grand Canyon Suite.” Grofé had something interesting in common with Aaron Copland — both of them were New York City natives who became famous for composing music about the American West. The best-known movement of Grofé’s Grand Canyon Suite, “On the Trail,” is a different kind of road trip: The loping gait of the music describes the ride down to the bottom of the Canyon on the back of a mule.

Nothing brings home how vast this country is quite like driving across the Great Plains, an area that was devastated during the Great Depression. In the middle of the Depression, the U.S. Department of Agriculture put out a half-hour documentary about the dust bowl called “The Plow That Broke the Plains” — the first government film produced for commercial release. Director Pare Lorentz shot footage in Montana, Wyoming, Colorado, Texas, and Kansas, and he got a suitable composer to write the score for the film: Virgil Thomson, who was born in Kansas City, Mo.

A Breeze from Alabama, march & ragtime two-step for piano

No one’s exactly sure where Scott Joplin was born. It was probably in northeast Texas, but Texas wasn’t a state back then. After Joplin became a pianist, he started traveling, mostly around the Midwest, as far north as Chicago — and eventually even to New York. “A Breeze from Alabama” is one of Joplin’s quieter rags. You can practically smell the camellias.

Charles Ives was the quintessential New Englander, growing up in Danbury, Conn., in the late 1800s, when Danbury was the hat-making capitol of the country. In this piece, Ives paints three unique musical portraits of a spot in Connecticut, and two in neighboring Massachusetts. The middle portrait, “Putnam’s Camp, Redding,” describes a Fourth of July picnic in Redding, Conn., where General Israel Putnam and his men made camp during the American Revolution — and where Ives had a summer home. It’s full of raucous quotations, including Ives’ own “Country Band March” and his “Overture and March 1776.”

Leonard Bernstein may have been born in New England, but it didn’t take him long to move to New York. No one epitomized the energy of the City — or captured it in his music — more than he did. Bernstein’s ballet Fancy Free, about three sailors on shore leave in New York, became the Broadway Musical On the Town. If New York is the pulse of the East Coast, then Times Square is the pulse of New York, and you can hear all the madness of midtown Manhattan in “Times Square,” the last of Bernstein’s Three Dance Episodes from On the Town.