What, exactly, are the requirements to be elected to the New Jersey Hall of Fame?

Thomas Nast is the great cartoonist whose pen launched crippling blows to the institutions of corrupt politicians including Tammany Hall’s Boss Tweed.  Nast generally gets the credit for inventing the symbols of the two major national parties, the donkey for the Democratic Party (or jackass, as in the first cartoon), and the elephant for the Republican Party, the party Nast favored.

Santa Claus’s commonly-accepted image owes a lot to Nast, who drew Santa Claus supporting the Union efforts in the Civil War.  Between 1855 and 1900, Nast supported the winning cause in at least seven presidential elections, illustrated the effects of America’s industrialization and rise as a world power, fought political corruption and campaigned for equal legal rights for immigrants and ex-slaves.

Lady Liberty?  Columbia?  An invention of Nast.  Nast’s image of Columbia was more than minor inspiration to the French friends of America who created the Statute of Liberty.  New Jersey is guarded, literally, with one of Nast’s creations.

Through it all, he clung to biases that, amplified by 1870s and 1880s politics, some people find less-than-acceptable today.  When Catholics raised money from Europe to establish schools in America so Catholic children would not undergo Protestant indoctrination, Nast sided with the public schools (and, perhaps, with the Protestants).  When immigrants, whose rights he defended, blindly turned the control of their votes over to corrupt political machines, he depicted those immigrants as louts, thugs and oafs.  On the issue of temperance, he sided with those who wanted to restrict alcoholic beverages, in opposition to German and Irish brewers and distillers.

Through it all, his pen brilliantly and clearly stated his positions, in images.  Nast’s work inspired Edgar Degas and Vincent van Gogh.

What should we make of the late-to-the-table complaints about Nast’s induction into the New Jersey Hall of Fame?  Opponents say Nast lampooned Catholics.  True.  Nast lampooned anyone whose policies he opposed.

Zeno presents a very good case that the opposition is wrong-headed, and ironic, coming from the voluble-and-usually obnoxious Bill Donohue of the Catholic League for Religious and Civil Rights (a self-proclaimed name that many people find inaccurate), a guy who might well be a target of Nast had Nast and Donohue occupied the same place in time.  (Though I quote Zeno at length here, go to his site to read the full piece.) 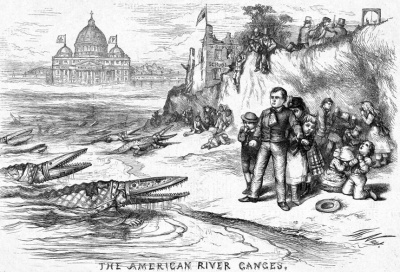 It was a theme to which the cartoonist returned whenever he wanted to inveigh against Romish influence (the Church was on record in opposition to the separation of church and state) or Irish immigration (Nast had decidedly nativist tendencies). Today we can look at Nast’s cartoons and see them as over the top. In high dudgeon, however, Bill Donohue cannot help but demonstrate once again his unerring instinct for avoiding le mot juste in favor of the words least apt:

[H]e demonized bishops by portraying them as crocodiles with miters for jaws; and he also depicted them as emerging from slime while prowling towards children.

Really, Bill? You had to go there? Silly man.

You just depicted Thomas Nast as a prophet.

Nast’s work provides us with a conundrum.  On one hand he ardently and fervently supported the Union against the Confederacy, especially with regard to emancipation of slaves.  On the other hand Nast ideologically opposed the Democratic Party — perhaps an easy thing to do in those days when the Democratic Party was on record supporting slavery — and portrayed anyone with Democratic links as a beast or thug.

Should Nast’s biases against Catholics and Irishmen who unthinkingly gave their poll power to Boss Tweed disqualify Nast from a spot in New Jersey’s Hall of Fame?

Here is a list of people elected to the New Jersey Hall of Fame over the past four years:

Generally a well-deserving group of heroes, don’t you think?

Careful students of history may blanche a bit at one name there, in consideration of the flap against Nast.  Woodrow Wilson had his own biases — he resegregated the White House as president.  He opposed civil rights for African Americans.  He invited the racist, pro-Ku Klux Klan movie, “Birth of a Nation,” into the White House and praised it for its accuracy and advocacy.

Wilson led the nation into World War I (after promising he would not), and he campaigned unsuccessfully for a peace treaty that might have prevented World War II, had he been listened to.  Wilson campaigned to create an international peace-keeping organization, the League of Nations, an agency doomed to failure because the U.S. Senate rejected Wilson’s every imprecation to ratify the treaty that ended the Great War and created the agency.

Can Bill Donohue actually make a case that the great cartoonist, Thomas Nast, does not belong in a pantheon that includes Frank Sinatra, Bruce Willis, John Travolta, and ex-con Martha Stewart?  Is Nast not at least as deserving as Woodrow Wilson, on the same grounds?

Nominations for the class of 2012 include Aaron Burr, the vice president candidate whose overweening ambition nearly derailed the nation’s Constitution in 1800, the man who shot Alexander Hamilton fatally, and a man who plotted the overthrow of the government of the U.S.

Uh, Bill?  Did you see Milton Friedman there?  Yeah, he was a great economist and he made popular television and book explanations of economics (that Republicans eschew today, to the detriment of free markets and political freedom) — but should he be there considering his work for the Pinochet regime in Chile?  I mean, Bill, can we be consistent?  Chile is a chiefly Catholic nation, you know, and surely the murders of 10,000 Catholics should weigh in here, shouldn’t it?

Is this really what Catholics are reduced to, today — a pointless, silly campaign against commemorating a great cartoonist?  May we assume Donohue and the Catholic Church oppose Nast across the board, in Nast’s campaigns against corruption, his work against slavery and support for the Union, and his support of the rights for immigrants?

And you, Dear Reader, should go vote for Thomas Nast’s inclusion, warts and all.

This entry was posted on Saturday, December 24th, 2011 at 12:16 pm and is filed under Cartoons, Civil War, History, Political cartoons, Politics, Racism, Religion. You can follow any responses to this entry through the RSS 2.0 feed. You can leave a response, or trackback from your own site.