I’m perplexed by people like Lou Pritchett, who claimed not to know who Barack Obama was after the last presidential election, or like Dinesh D’Souza, who make up fantastic webs of stories about how President Obama is Auric Goldfinger, the Brain and Lex Luthor rolled into one, based on less than gossamer.

I’m fascinated with the profile of Obama in the current issue of Vanity Fair, by Michael Lewis, “Obama’s Way.”  It lends insights on leadership, foreign policy, and how a celebrity or high office holder (or both) can work to stay grounded and do a good job.

To someone who has staffed government agencies, and worked for elected and appointed officials, Lewis’s profile tells a lot in just a few words.

One summer morning I met him outside the private elevator that brings him down from the residence. His morning commute, of roughly 70 yards, started in the ground-floor center hall, and continued past a pair of oil paintings, of Rosalynn Carter and Betty Ford, and through two sets of double doors, guarded by a Secret Service officer. After a short walk along a back porch, guarded by several other men in black, he passed through a set of French doors into the reception area outside the Oval Office. His secretary, Anita, was already at her desk. Anita, he explained, has been with him since he campaigned for the Senate, back in 2004. As political attachments go, eight years isn’t a long time; in his case, it counts as forever. Eight years ago he could have taken a group tour of the White House and no one would have recognized him.

Passing Anita, the president walked into the Oval Office. “When I’m in Washington I spend half my time in this place,” he said. “It’s surprisingly comfortable.” During the week he is never alone in the office, but on weekends he can come down and have the place to himself. The first time Obama set foot in this room was right after he’d been elected, to pay a call on George Bush. The second time was the first day he arrived for work—and the first thing he did was call in several junior people who had been with him since long before anyone cared who he was so they might see how it felt to sit in the Oval Office. “Let’s just stay normal,” he said to them.

You should read the article.  And pass it on.  Get the print version, secretly run a few copies and pass them around to your friends and people you go to church with, or your poker buddies, or the other professors in the biology department.  What do they think of the story?

Stick to the facts, in other words.  Make your own decisions on good information.

Lou Pritchett?  You still out in the wilderness?  Read this. 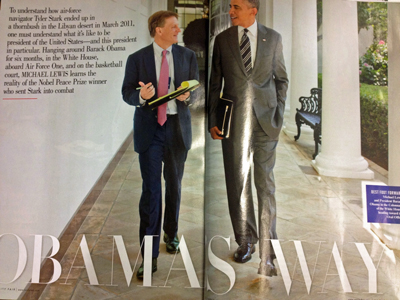 This entry was posted on Thursday, September 13th, 2012 at 6:01 pm and is filed under Barack Obama, History, Leadership, Politics, President Obama. You can follow any responses to this entry through the RSS 2.0 feed. You can leave a response, or trackback from your own site.