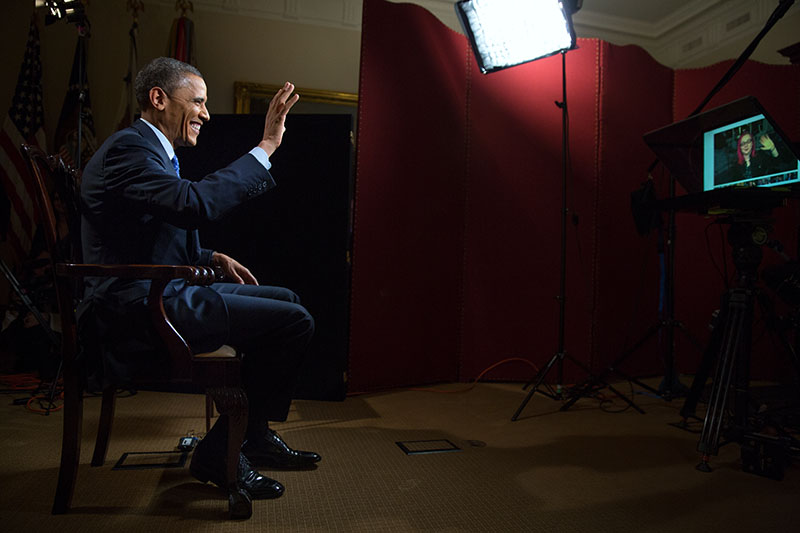 Obama’s got good answers and is willing to discuss policy with American citizens; critics keep making stuff up to complain about. Caption from the White House: President Barack Obama participates in a “Fireside Hangout” on Google+ with Americans from around the country to discuss his State of the Union Address, in the Roosevelt Room of the White House. February 14, 2013. (Official White House Photo by Pete Souza)

Can’t make this stuff up as fast as the unthinking anti-Obama folks can dish it out.

Their criticisms often vaporize at the slightest investigation, though.  Why not talk serious policy?  They won’t do it.

Wednesday night, President Obama participated in a Google+ ” Fireside Hangout.”  These sessions take their cue in part from FDR’s Fireside Chats.  In the modern, Google+ version, it’s not just the president talking.  He takes questions from a panel of interrogators, and from people who send in questions by Tweet or e-mail.  Obama took questions from citizens.

One woman, Jackie Guerrero (sp?) complained that the Obama administration enforces our immigration laws with much more toughness than any previous administration, ever.  She said too many people who shouldn’t be deported, are being deported.  She asked President Obama to explain why his administration has done that.

Obama said he’s the executive, and he’s required to carry out the laws.  He urged the woman to support changes in the laws, but he pointed out that must come from Congress.  His answer took two-and-a-half minutes, and he outlined the need for immigration reform.  In a few seconds, he started his answer with this:

You as a reasonably intelligent and perceptive Dear Reader recognize that Obama is asking for citizen pressure on Congress to pass reform of our immigration laws.

You as a reasonably intelligent and perceptive Dear Reader are also well aware there is a group of people loose in America who say that, whatever Obama says, Obama is wrong.

So, what do those Obama H8rs say?  Do they complain about immigration reform, saying we don’t need it?

No, they don’t even give their listeners and viewers the dignity of talking about the issues. Here’s how Michael Savage butchered the video of the Google session:

In a very technical sense, that’s accurate reporting of part of Obama’s statement.

But it’s not the whole truth, as you can see.  There is no mention whatsoever of the issue at hand, immigration reform, for example.  How can they report it correctly, if they don’t even report what happened?

How have others reacted?  Our old friend Joe Leavell leapt at the opening Michael Savage provided, with a Facebook post linking to the video:

On Facebook, a complaint leaving the impression that Obama said he wants to be emperor, though of course, that’s not at all what Obama said.

One more demonstration we don’t need that people who truly hate Obama with no good reason will make up crap to claim against him, regardless what he says.

I wish they’d just wake up, read the old Boy Scout Citizenship Merit Badge booklet, and be good citizens without all the hoax complaints.

No, Obama did not say he wants to be emperor.  No, he did not.

Alas, Joe Leavell on Facebook is not the only one who had what should be embarrassing conniptions over the mined quote.

Wall of shame, commenters who fuzzed up the news and ran with the political smear; count ’em:

Some of you may remember Spike Jones’s send-up of that classic show tune, “I’m in the Mood for Love.”  One verse of the lyric is, “Funny, but when I’m near you, I’m in the mood for love.”  In Spike’s version, an indignant voice interrupts with, “Funny butt!  Who’se got a funny butt?”

That’s rather what Savage and others have done with Obama’s answer here.

This cheap and misleading criticism ignored the two-and-a-half-minute response Obama gave to the immigration and deportation question, in which he concisely explained the problems and the urgent need for immigration reform to benefit the U.S. economy.  See the complete answer in the video of the entire session, at the bottom of this post.

Obama’s critics don’t dare allow him a fair chance to state his position.  They have no answers for his clearly thought-out plans.

See for yourself how Obama’s views were covered up and his meanings distorted.  Here’s the entire Google Fireside Hangout, all 47 minutes of it (in HD and stereo); the question on immigration comes about 19 minutes in, and Obama’s answer took about two and a half minutes, all ignored completely by Obama’s H8rs:

Update, post script:  CBS’s guy who keeps all the records, Mark Knoller, accurately reported Obama’s words in a Tweet, with just 140 characters; why can’t conservative wackoes get it right with 1,000 words and video?  They probably don’t intend to get it right, like Knoller works to get it right every day, day in, and day out.

Pres Obama says there are limits to what he can do on his own about immigration. I'm President, not Emperor of the United States, he says.

This entry was posted on Monday, February 18th, 2013 at 12:44 am and is filed under Accuracy, Blogs, History, Immigration, Journalism, Political Smear, Politics, Rampant stupidity, State of the Union. You can follow any responses to this entry through the RSS 2.0 feed. You can leave a response, or trackback from your own site.