North Korea: A hole in the fabric of the 21st century

Here’s a photograph of one of the greatest, and longest-running tragedies of our time.

No, that’s not a stretch of water in the red circle.  That’s North Korea, at night, blacked out by a lack of electrical lights. 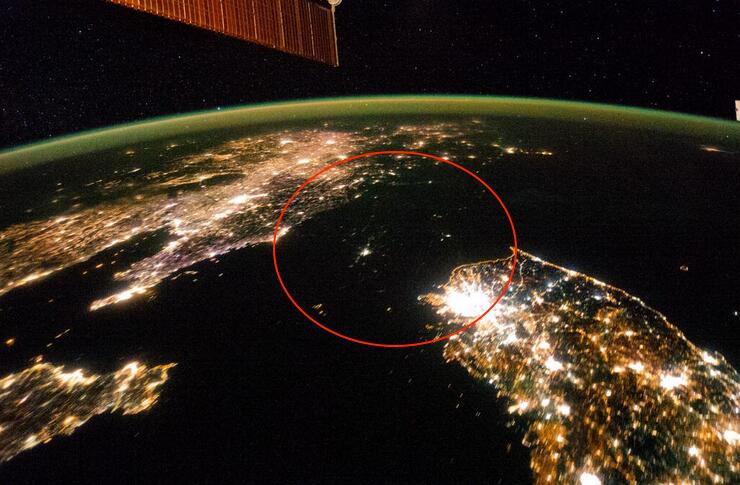 Tweetpic from the Washington Post: North Korea looks like a sea of misery in this photo from space http://wapo.st/1c1B84q via @KnowMoreWP pic.twitter.com/nB3g8fa63Q

It’s a photo from the International Space Station taken in January.

The KnowMore blog from the Post describes the tragedy, and points to even more disturbing stories:

North Korea appears as nothing more than a shadow in the above photograph, taken at night aboard the International Space Station last month. South Korea’s eastern coastline is indistinguishable from the demilitarized zone along the border with the North, as though the Sea of Japan flowed into the Yellow Sea and Pyongyang were an island in a strait separating South Korea from China.

North Korea’s interior is nearly invisible from orbit at night, just as what happens inside the country on a day-to-day basis is largely invisible to the outside world. U.N. investigators managed to shine a little light into North Korea’s darkest corners last month.  [Click here to get to the U.N. report]

I’ve used similar photos in class.  It’s a powerful exercise.  North Korea is as dark as undeveloped and largely unpopulated areas of the Congo River Basin, the Australian Outback, the Arabian Peninsula’s “Empty Quarter,” and almost as dark as Antarctica.

No doubt stargazing is good in some of those dark spots in North Korea.  This is one case where the absence of light pollution does NOT indicate good planning, but instead an amazing paucity of rational development.