Is it an unprecedented coincidence?  205 years ago today, just minutes apart according to unconfirmed accounts, Abraham Lincoln was born in a rude log cabin on Nolin Creek, in Kentucky, and Charles Darwin was born into a wealthy family at the family home  in Shrewsbury, England.

Gutzon Borglum’s 1908 bust of Abraham Lincoln in the Crypt of the U.S. Capitol – Architect of the Capitol photo

Lincoln would become one of our most endeared presidents, though endearment would come after his assassination.  Lincoln’s bust rides the crest of Mt. Rushmore (next to two slaveholders), with George Washington, the Father of His Country, Thomas Jefferson, the author of the Declaration of Independence, and Theodore Roosevelt, the man who made the modern presidency, and the only man ever to have won both a Congressional Medal of Honor and a Nobel Prize, the only president to have won the Medal of Honor.  In his effort to keep the Union together, Lincoln freed the slaves of the states in rebellion during the civil war, becoming an icon to freedom and human rights for all history.  Upon his death the entire nation mourned; his funeral procession from Washington, D.C., to his tomb in Springfield, Illinois, stopped twelve times along the way for full funeral services.  Lying in state in the Illinois House of Representatives, beneath a two-times lifesize portrait of George Washington, a banner proclaimed, “Washington the Father, Lincoln the Savior.”

Darwin would become one of the greatest scientists of all time.  He would be credited with discovering the theory of evolution by natural and sexual selection.  His meticulous footnoting and careful observations formed the data for ground-breaking papers in geology (the creation of coral atolls), zoology (barnacles, and the expression of emotions in animals and man), botany (climbing vines and insectivorous plants), ecology (worms and leaf mould), and travel (the voyage of H.M.S. Beagle).  At his death he was honored with a state funeral, attended by the great scientists and statesmen of London in his day.  Hymns were specially written for the occasion.  Darwin is interred in Westminster Abbey near Sir Isaac Newton, England’s other great scientist, who knocked God out of the heavens.

Lincoln would be known as the man who saved the Union of the United States and set the standard for civil and human rights, vindicating the religious beliefs of many and challenging the beliefs of many more.  Darwin’s theory would become one of the greatest ideas of western civilization, changing forever all the sciences, and especially agriculture, animal husbandry, and the rest of biology, while also provoking crises in religious sects.

Lincoln, the politician known for freeing the slaves, also was the first U.S. president to formally consult with scientists, calling on the National Science Foundation (whose creation he oversaw) to advise his administration.  Darwin, the scientist, advocated that his family put the weight of its fortune behind the effort to abolish slavery in the British Empire.  Each held an interest in the other’s disciplines.

Both men were catapulted to fame in 1858. Lincoln’s notoriety came from a series of debates on the nation’s dealing with slavery, in his losing campaign against Stephen A. Douglas to represent Illinois in the U.S. Senate.  On the fame of that campaign, he won the nomination to the presidency of the fledgling Republican Party in 1860.  Darwin was spurred to publicly reveal his ideas about the power of natural and sexual selection as the force behind evolution, in a paper co-authored by Alfred Russel Wallace, presented to the Linnean Society in London on July 1, 1858.   On the strength of that paper, barely noticed at the time, Darwin published his most famous work, On the Origin of Species, in November 1859.

The two men might have got along well, but they never met.

Go celebrate human rights, good science, and the stories about these men.

A school kid could do much worse than to study the history of these two great men.  In fact, we study them far too little, it seems to me.

Anybody know what hour of the day either of these men was born?

Yes, you may fly your flag today for Lincoln’s birthday; the official holiday, Washington’s Birthday, is next Monday, February 17th — and yes, it’s usually called “President’s Day” by merchants and calendar makers.

Press release from the University of Texas-Southwestern Medical Center in Dallas:

DALLAS – January 29, 2014 – Exposure to DDT may increase the likelihood of developing Alzheimer’s disease later in life, a study with researchers at UT Southwestern Medical Center suggests. While previous studies have linked chronic diseases such as cancer and diabetes to DDT, this is the first clinical study to link the U.S.-banned pesticide to Alzheimer’s disease.

The study, published online in JAMA Neurology, found elevated levels of the DDT metabolite, DDE, that were 3.8 times higher in patients diagnosed with Alzheimer’s disease in comparison to control subjects. The studies were conducted in partnership with researchers at Emory University School of Medicine and Rutgers Robert Wood Johnson Medical School.

“We have additional studies underway that will seek to directly link DDT exposure to Alzheimer’s disease,” said co-author Dr. Dwight German, Professor of Psychiatry at UT Southwestern. “If a direct link is made, our hope is to then identify the presence of DDE in blood samples from people at an early age and administer treatments to remove it.”

Researchers made the link between DDE and Alzheimer’s by measuring three components – blood serum levels, severity of the patient’s Alzheimer’s disease as measured by the Mini-Mental State Examination (MMSE) and its relation to serum DDE levels, and the reaction of isolated nerve cells to DDE. Treatment of human nerve cells with DDE caused them to increase the production of the amyloid precursor protein that is directly linked to Alzheimer’s disease.

Participants in the study underwent preliminary testing to ensure that they didn’t have symptoms of other dementia-related diseases, and were an average age of 74, while the control subjects were on average 70 years old. These findings may help lead to the development of early biomarkers that can determine whether a person will develop Alzheimer’s disease later in life due to DDT exposure.

Alzheimer’s disease is the most common neurodegenerative disease worldwide and is expected to increase three-fold over the next 40 years, according to the researchers.

DDT (dichloro-diphenyl-trichloroethane) was used extensively as an insecticide in the 1940s, but has been banned in the United States since 1972 after scientists linked the compound to wildlife health and environmental concerns. DDT is still used in other countries to combat the spread of malaria.

About UT Southwestern Medical Center
UT Southwestern, one of the premier academic medical centers in the nation, integrates pioneering biomedical research with exceptional clinical care and education. The institution’s faculty includes many distinguished members, including five who have been awarded Nobel Prizes since 1985. Numbering more than 2,700, the faculty is responsible for groundbreaking medical advances and is committed to translating science-driven research quickly to new clinical treatments. UT Southwestern physicians provide medical care in 40 specialties to nearly 91,000 hospitalized patients and oversee more than 2 million outpatient visits a year.

Once again, research seems to demonstrates the wisdom of Rachel Carson, who warned us that we could not know the long-term damage done by untested pesticides applied with abandon in great abundance as if it were a solution to everything.

Carson’s book indicting pesticides regulation, Silent Spring, was published in 1962, with more than 50 pages of footnotes and citations to scientific studies.  In the 52 years since, none of that research has been rebutted by any further research.  Instead, more harms have been discovered, greater questions raised about the damage done by pesticides applied indiscriminantly.

When the Moon hits your eye, in Arches NP 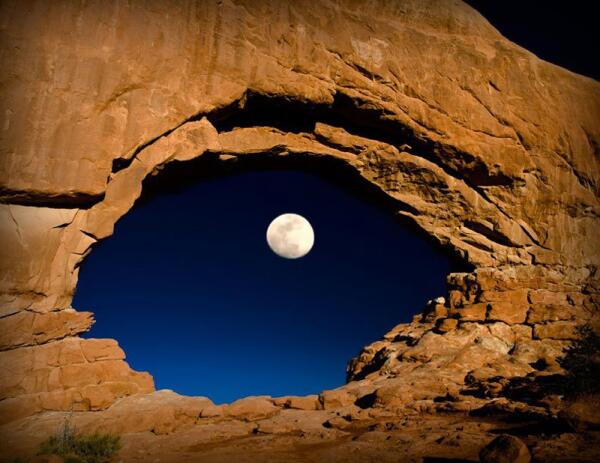 Photo by Lynn Sessions; “THE EYE OF THE #MOON: North Window arch at Arches National Park in #Utah. #NatGeo pic.twitter.com/XwHfdWK5Ft

I’m assuming not a lot of post-photo processing on this. Lynn Sessions had to figure out when the Moon would be in the North Window Arch, calculate exposure, and shoot off enough of them to get a decent shot before the Moon moved.  I suspect the rocks were “painted” with a flashlight during the exposure.

(Haven’t yet found the technical details of the shot. But I did find this about the photographer:
I’m a frustrated amateur photographer who is trying to visit every corner in Utah as well as hike/photograph every canyon in southern Utah. More at http://www.DreamBreeze.com )