Contrary to science denialist claims, DDT is not harmless.  Users and abusers of DDT, abandoned stocks of DDT and other pesticides around the world, after the stuff had become essentially useless against insect or other pests originally targeted.

In the U.S., EPA moves in to clean up DDT dumps, under the Comprehensive Environmental Response, Compensation and Liability Act of 1980 (CERCLA), or Superfund.  In much of the world, various UN agencies find the old pesticides, and clean them up as funding allows.

The Food and Agricultural Organization (FAO) documents its cleanup efforts with photos of sessions training technicians to find and catalog dump sites, repackaging of old drums when necessary, extraction, packing and shipping to a disposal site.

Sometimes the toxic wastes did not stay neatly stacked.

DDT use against insect vectors of disease essentially halted in the mid-1960s.  The Rockefeller Foundation’s and UN’s ace mosquito fighter, Fred Soper, ran into mosquitoes in central Africa that were resistant and immune to DDT. Farmers and businesses had seized on DDT as the pesticide of choice against all crop pests, or pests in buildings.  By the time the UN’s malaria-fighting mosquito killers got there, the bugs had evolved to the point DDT didn’t work the malaria eradication campaign.

Also, there were a few DDT accidents that soured many Africans on the stuff.  Around lakes where local populations caught the fish that comprised the key protein in their diet, farmers used DDT, and the runoff killed the fish.

Use of DDT ended rather abruptly in several nations.  Stocks of DDT that had been shipped were abandoned where they were stored.

Prevention and disposal of obsolete chemicals remains as a thorny problem throughout much of the world.  Since 2001, under the Persistent Organic Pollutants Treaty, (POPs), the UN’s World Health Organization (WHO) has coordinated work by WHO and a variety of non-governmental organizations (NGOs), as well as governments, to make safe the abandoned pesticides, and detoxify or destroy them to prevent more damage.  FAOs efforts, with photos and explanation, is a history we should work to preserve.

DDT provided powerful insect killing tools for a relatively short period of time, from about 1945 to 1965.  In that short period, DDT proved to be a deadly killer of ecosystems to which it was introduced, taking out a variety of insects and other small animals, on up the food chain, with astonishing power.  One of DDT’s characteristics is a long half-life — it keeps on killing, for months or years. Once that was thought to be an advantage.

Mars ♥ you, courtesy of NASA

14 February 2004 NASA caption:  “Happy St. Valentine’s Day from the Mars Global Surveyor (MGS) Mars Orbiter Camera (MOC) team! This collection of images acquired over the past 3 Mars years shows some of the heart-shaped features found on Mars by the MGS MOC.”

No kidding! Mars really ♥s us!  Hope you had a happy Valentines Day.

Original Caption Released with Image:
14 February 2004
Happy St. Valentine’s Day from the Mars Global Surveyor (MGS) Mars Orbiter Camera (MOC) team! This collection of images acquired over the past 3 Mars years shows some of the heart-shaped features found on Mars by the MGS MOC.

Typewriter of the moment: Pete Seeger

Photo found at the blog of the good Robert Messenger at OzTypewriter:

I can find no identifying information on the photo.  It looks, to me, to have been taken in the 1950s, judging by Pete’s hair and no beard. 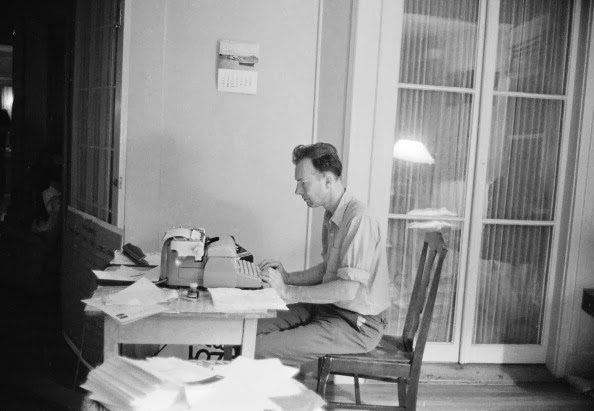 Pete Seeger at a typewriter, probably in the 1950s.

It’s an electric typewriter, I think, seeing a cord coming out of the back.  Probably a Royal (I’m not great at identifying typewriters, you know).   Was this taken at Pete’s home in Beacon?  Perhaps.

Can you help in identifying the time and place of this photo?