Turns out there are real turkeys in Alabama. They’ve expressed some concern that Judge Roy Moore impersonates a turkey in court.

A Thanksgiving salute from the denizens of our public lands. 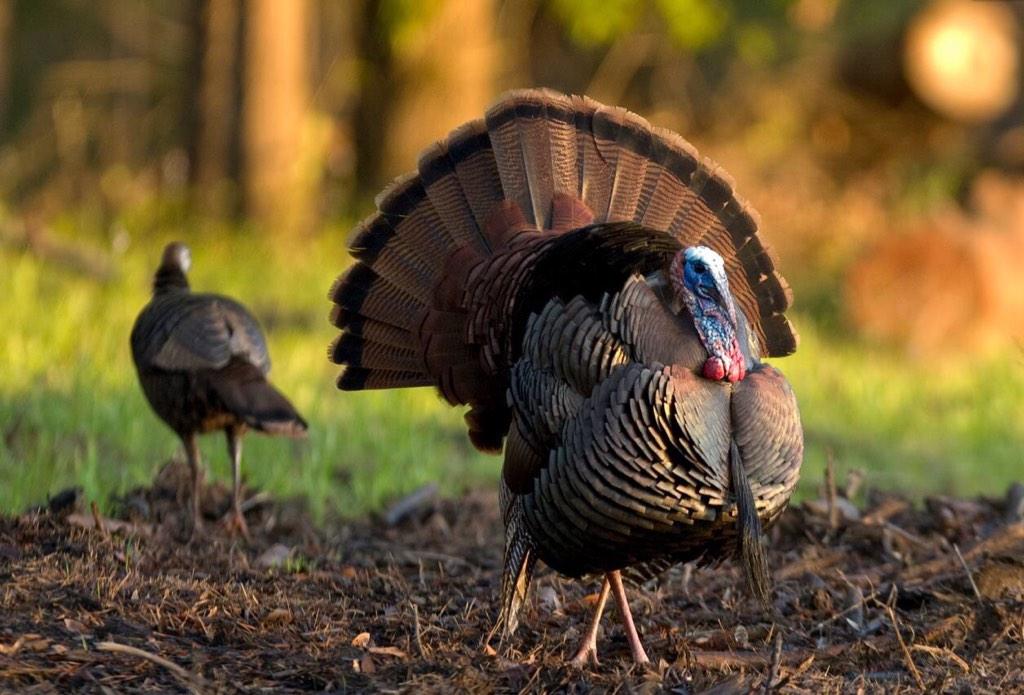 Mt. Timpanogos and the U.S. flag. Photo by Bob Walker of Orem, Utah; from Orem, circa September 2012. That’s Mt. Baldy on the left. This site is about six miles from our old home in Pleasant Grove, Utah, where we celebrated a few dozen Thanksgivings.

Fly  your flag on Thanksgiving — it’s one of about a score of dates Congress designated specially to fly the flag, in the U.S. flag code.

Americans load up this particular holiday with significance, often for no particular reason.  As a holiday, it is really rather uniquely American.  There were feasts of thanksgiving from time to time throughout recorded history, but most often they were one-shot affairs, after a particular event.

In America, Americans eagerly seized on the idea of one day set aside “to give thanks,” both with the religious overtones some wanted to see, and with the commercial overtones others wanted, especially during the Great Depression.  In our 238th year since the Declaration of Independence, the 225th year since the Constitution was enacted, we come to Thanksgiving as a major period of travel to old family homesteads, to Thanksgiving as a period of genuine thanks to American troops fighting in foreign lands half a world away, and as a commercial celebration that sucks the sobriety and spirituality out of all but the most dedicated of profiteers, or bargain hunters.

In the early 20th century, some people sent greeting cards for Thanksgiving; this is a tradition overtaken by Christmas, Hanukkah and New Years cards, today. (Image from HubPages, unknown year — credit for cards, “Images courtesy VintageHolidayCrafts.com“

Thanksgiving often stumbled into controversy.  George Washington issued proclamations calling for a day of thanks, but struck out all references to Christianity.  Some president’s issued similar proclamations up to the Civil War, When Abraham Lincoln used the holiday as a time to remind  Americans that they had a lot to be thankful for, partly as a means to keep Americans focused on the war to be won, and keep supporting troops in the field.  During the Great Depression, Franklin D. Roosevelt juggled dates for Thanksgiving, moving it earlier in November to create a longer Christmas shopping season, hoping to stimulate sales, and thereby push America further out of the Depression.

In 2001 George W. Bush urged Americans to go shopping so terrorists would know America was not defeated by the attack on the World Trade Center, knowing that a stimulus to the economy would help garner support for other policies.

2012 saw controversy over Big Box stores and other major, national retailers pushing their post- Thanksgiving, Christmas sales, into Thanksgiving day itself.  Is this fair to employees?  Is this too much emphasis on purchasing, and too little emphasis on family and giving thanks?

In 2014, we have the same arguments about Big Box stores pushing “Black Friday” into the holiday, and even more arguments about Christmas creep reducing the importance of Thanksgiving to Americans.

You can be sure of one thing:  It’s probably safe to fly your American flag on Thanksgiving, as Congress suggested.  It won’t make your turkey more moist  or your pumpkin pie taste any better.  It won’t boost your sales, if you’re a retailer, nor find you a bargain, if you’re a shopper.

But as a free act of patriotism, support for our nation, and our troops, and a demonstration that even after a divisive election, we’re all one nation, it’s a pretty good deal.

November 1869, in the first year of the Grant administration — and Nast put aside his own prejudices enough to invite the Irish guy to dinner, along with many others.

With a nation whose emotions are raw from events in Ferguson, Missouri, could there be a better, more timely reminder of what we’re supposed to be doing?

(Click for a larger image — it’s well worth it.)

As described at the Ohio State site:

“Uncle Sam’s Thanksgiving Dinner” marks the highpoint of Nast’s Reconstruction-era idealism. By November 1869 the Fourteenth Amendment, which secures equal rights and citizenship to all Americans, was ratified. Congress had sent the Fifteenth Amendment, which forbade racial discrimination in voting rights, to the states and its ratification appeared certain. Although the Republican Party had absorbed a strong nativist element in the 1850s, its commitment to equality seemed to overshadow lingering nativism, a policy of protecting the interests of indigenous residents against immigrants. Two national symbols, Uncle Sam and Columbia, host all the peoples of the world who have been attracted to the United States by its promise of self-government and democracy. Germans, African Americans, Chinese, Native Americans, Germans, French, Spaniards: “Come one, come all,” Nast cheers at the lower left corner.

One of my Chinese students identified the Oriental woman as Japanese, saying it was “obvious.” Other friends say both are Chinese.  Regional differences.  The figure at the farthest right is a slightly cleaned-up version of the near-ape portrayal Nast typically gave Irishmen.

If Nast could put aside his biases to celebrate the potential of unbiased immigration to the U.S. and the society that emerges, maybe we can, too.

Hope your day is good; hope you have good company and good cheer, turkey or not. Happy Thanksgiving.  And of course, remember to fly your flag!

Yes, if you’re a faithful reader here, you’ve seen it before.