Especially this year: Fly your flag May 15 for Peace Officers Memorial Day

Eden Prairie, Minnesota, May 15, 2013: Eden Prairie officers participated in the tradition of standing guard at the Minnesota Law Enforcement Memorial on the state capitol grounds. The officers stood for twenty minutes, then after the guard duty change, the officers left their posts, rang the memorial bell and stated the name of a Minnesota officer who was killed in the line of duty. This ritual continued every twenty minutes with officers from departments across the state during the 24-hour vigil.

We remember fallen policemen on May 15, every year since 1962 nationally.

This year, the remembrance probably has more meaning, in New York City, throughout Mississippi, and in dozens more states and communities where policemen were killed in the line of duty.

Each May, our Nation salutes the American women and men who put their lives on the line every day to maintain public safety and hold accountable those who break the law. On Peace Officers Memorial Day and during Police Week, we recognize all those who have dedicated their lives to this vital task. With heavy hearts, we mourn the heroes taken from us only because they chose to serve, and we rededicate ourselves to carrying forward their noble legacy.

Our law enforcement officers have extraordinarily tough jobs. They regularly work in dangerous environments and in difficult, high-tension situations. And they often face challenges deeply rooted in systemic problems and broader social issues. These professionals serve to protect their communities and strengthen their Nation, and they deserve to go home safely to their loved ones at the end of each shift. As President, I am committed to making sure America’s dedicated police officers receive the support and recognition they have earned, and to doing all I can to protect those who protect us.

One important way to make policing safer and more effective is by continuing to enhance relations and trust between law enforcement and the neighborhoods they serve. This will make it easier and safer for police officers to do their jobs, and it will strengthen the places we live and work. This important task will require our Nation — our communities, our law enforcement, and our leaders at every level — to come together to commit to meeting this challenge and moving our country forward, block by block and neighborhood by neighborhood. As President, I firmly believe it is within our power to make progress in our time, and I am dedicated to partnering with all those who are willing to do this necessary work.

My Administration is taking concrete steps to implement the commonsense, pragmatic recommendations my Task Force on 21st Century Policing put forward based on input from law enforcement personnel as well as criminal justice experts, community leaders, and civil liberties advocates. And we are engaging with local jurisdictions so they can begin to make the changes that will help ensure that police officers and their communities are partners in battling crime and that everyone feels safe on and off the job.

Our Nation’s police officers are mentors in our schools, familiar faces on the corner, and pillars of our communities. They keep our borders secure and our roads safe, and in times of crisis, they rush toward tragedy. They are hardworking mothers, fathers, daughters, and sons who have dedicated their lives to public service, working every day to build a brighter future for their families and their Nation. Their selfless commitment and daily sacrifice represent what is possible for every city, town, and reservation in America, and our country has an enormous opportunity to lift up the very best law enforcement personnel as examples — not just to other officers, but to all who aspire to lives of good citizenship. This week and every week, let us remember the patriots who laid down their lives for ours and honor all who strive to make our Nation more safe, more free, and more just.

NOW, THEREFORE, I, BARACK OBAMA, President of the United States of America, do hereby proclaim May 15, 2015, as Peace Officers Memorial Day and May 10 through May 16, 2015, as Police Week. I call upon all Americans to observe these events with appropriate ceremonies and activities. I also call on the Governors of the United States and its Territories, and appropriate officials of all units of government, to direct that the flag be flown at half-staff on Peace Officers Memorial Day. I further encourage all Americans to display the flag at half-staff from their homes and businesses on that day.

IN WITNESS WHEREOF, I have hereunto set my hand this eighth day of May, in the year of our Lord two thousand fifteen, and of the Independence of the United States of America the two hundred and thirty-ninth.

Check your local newspapers and municipal police websites for memorial services near you. 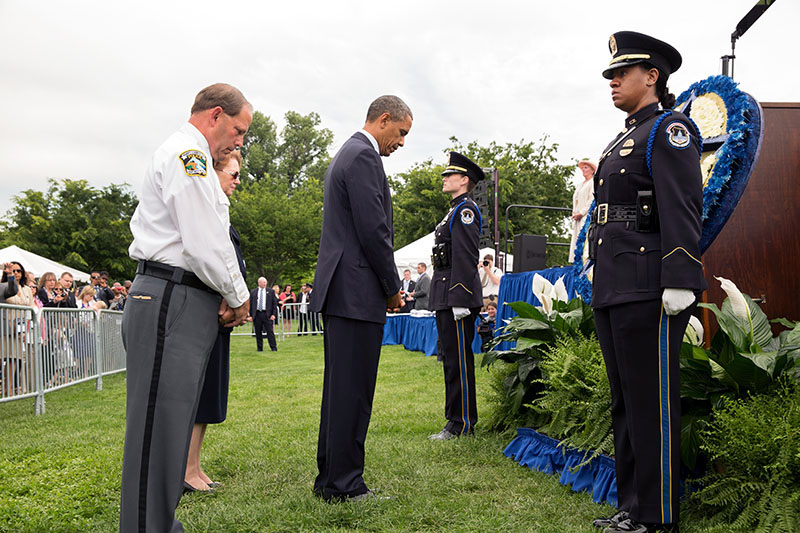 White House caption from 2013 ceremony: President Barack Obama bows his head after placing a flower in a wreath during the National Peace Officers Memorial Service, an annual ceremony honoring law enforcement who were killed in the line of duty in the previous year, at the U.S. Capitol in Washington, D.C. May 15, 2013. Chuck Canterbury, National President, Fraternal Order of Police and Linda Hennie, President, FOP Auxiliary stand with the President. (Official White House Photo by Pete Souza)

This entry was posted on Tuesday, May 12th, 2015 at 4:54 pm and is filed under Flag etiquette, Fly your flag today, History. You can follow any responses to this entry through the RSS 2.0 feed. You can leave a response, or trackback from your own site.

One Response to Especially this year: Fly your flag May 15 for Peace Officers Memorial Day